Archaeological excavations deep within the rainforests of Sri Lanka have unearthed the earliest evidence for hunting with bows and arrows outside Africa.

At Fa-Hien Lena, a cave in the heart of Sri Lanka’s wet zone forests, we discovered numerous tools made of stone, bone, and tooth – including a number of small arrow points carved from bone which are about 48,000 years old.

When was the bow and arrow invented?

The invention of the bow and arrow allowed people to hunt prey at a much greater distance. People no longer had to get within “a stone’s throw” of prey which could suddenly bolt and escape. This innovation greatly increased the chances of a successful hunt.

Bows and arrows also made it much safer to hunt dangerous prey. If you don’t have to get too close, you’re less likely to be trampled or mauled by a hurt and angry animal.

The origin of the bow and arrow is one of the great mysteries of human technological innovation. How did it come about? When? Where? And why? 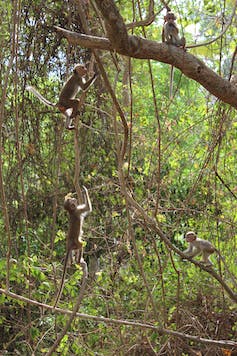 Small monkeys such as these macaques were targeted with bows and arrows from 48,000 years ago. P. Roberts

Currently, the oldest evidence for the use of the bow and arrow are small stone points found in Sibudu cave in South Africa, which are some 64,000 years old.

Outside Africa, the oldest finds were previously pieces of bows found in Germany dating back no more than 18,000 years.

Because bows and arrows are mainly made from highly perishable stuff like wood, sinew, and fibres, they don’t leave a lot of evidence behind for archaeologists to find. So the small bone points recovered from Fa-Hien Lena are an important discovery.

The bone points show evidence for having been fixed to a small shaft and shot at high speed into prey – which were apparently mostly small monkeys and giant squirrels, judging by the butchered bones thrown away at the site after meals. 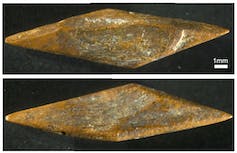 One of the small bone points discovered at Fa-Hien Lena. M. C. Langley

The discovery of such ancient bone arrow points is startling in itself. However, we also found other tools which give equally rare insights into the lives of the earliest members of our species currently documented in Sri Lanka.

Particularly interesting are well-preserved knives, scrapers, and awls made from the bones and teeth of monkeys and deer, which were used to work skins or plant materials.

These tools are our only way to learn about the other, more fragile items that may originally have been at the site, because anything made from leather or plant fibre (such as clothing, bags, baskets, mats, or nets) stood no chance of surviving 48,000 years in the humid tropical environment. 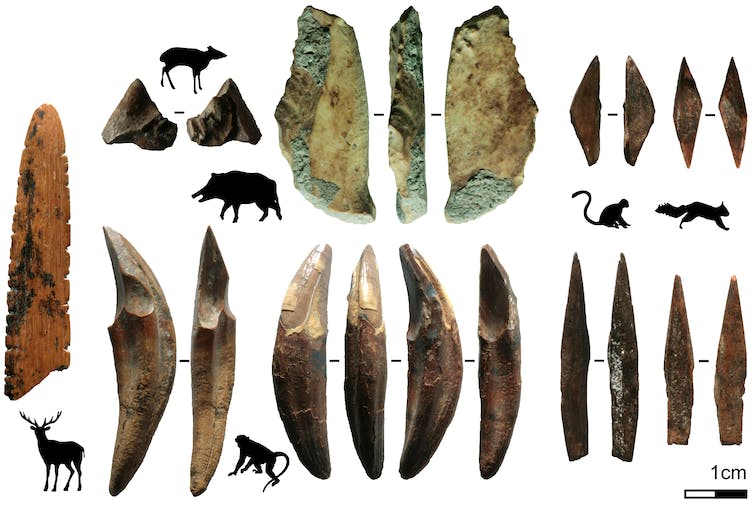 One of these artefacts is an unusual implement with carefully spaced notches down each side. It appears to be a shuttle for creating nets of woven fibres. No doubt nets would have been incredibly useful for catching the tree-dwelling prey the people of Fa-Hien Lena hunted, as well as bringing the fish up from the rivers. 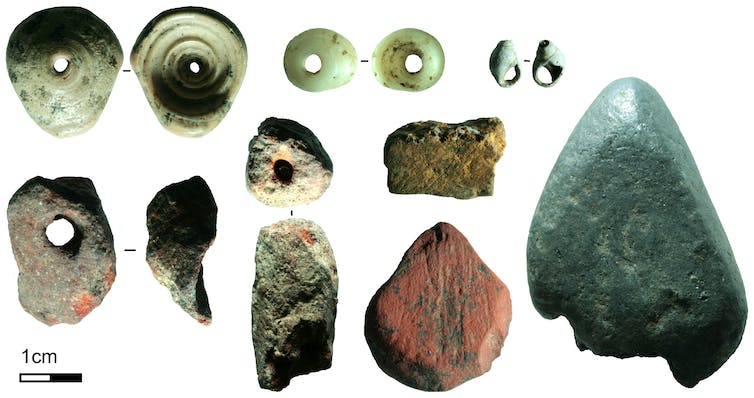 Symbolic items of Fa-Hien Lena. Some of the symbolic artefacts recovered from Fa-Hien Lena, Sri Lanka. Here you can see shell beads and different pigments in bright red, yellow, and silver which were used to decorate bodies or items. M. C. Langley

These rainforest pioneers also left behind evidence about their social lives in the form of white shell beads and small blocks of mineral pigments in bright colours: red, yellow, and silver.

Each of the pigment nodules show signs they were used to create paints for the body, and three of the bright red nodules were drilled to be strung as beads – something we have not found anywhere else in the world.

The white shell beads, on the other hand, are similar to those found in Africa and Eurasia, but were collected or traded from the coast some 20–30 kilometres away. Apparently, small, shiny, white shell beads never get old.

With these finds, it is becoming more and more clear that we have only just begun to scratch the surface when it comes to understanding the earliest modern human communities.