This decision led to the immediate protection of more Leadbeater’s possum habitat and will lead to further habitat set aside over the next ten years as native timber harvesting is phased out in Victoria.

But these short-term, site-based measures will not guarantee the long-term conservation of this iconic Victorian species.

Read more: The Leadbeater's possum finally had its day in court. It may change the future of logging in Australia

Our new study modelled changes in forests over the next 250 years, focusing on 280,000 hectares of Victoria’s Central Highlands, home to the majority of remaining Leadbeater’s possums.

We looked at different scenarios of how both climate change and timber harvesting might play out. And we identified three important findings.

First, Leadbeater’s possum habitat is dynamic. It’s transient across the landscape over time as disturbances, such as bushfires, continually change the spatial distribution of hollow-bearing trees and young forests.

Second, while timber harvesting poses a local-scale threat, at a larger scale – across hundreds of thousands of hectares – bushfire poses the greatest threat to the species’ habitat.

Last, we found less than half of the area within current parks, reserves, and timber harvest exclusion zones provided stable long-term habitat for Leadbeater’s possum over the next century. 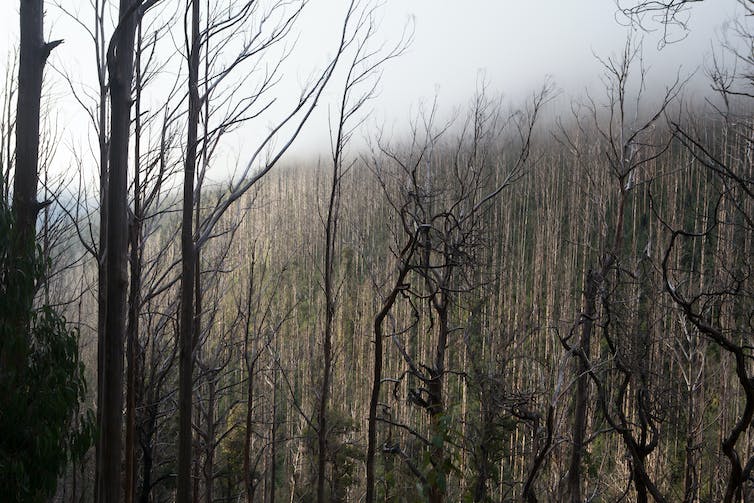 The Black Saturday bushfires razed almost half of the Leadbeater’s possum habitat in 2009. Shutterstock

Leadbeater’s possums live in ash and snow gum forests. They depend on two key habitat features: hollow-bearing trees for nesting and dense understorey for moving around the forest.

We used a set of four scenarios to explore how climate change and timber harvesting impact long-term habitat availability by focusing on the where and when hollow-bearing trees and dense understorey are found in the landscape.

Read more: Comic explainer: forest giants house thousands of animals (so why do we keep cutting them down?)

The scenarios included projecting current climate conditions, and projecting a 2℃ rise in average annual temperature with a 20% reduction in yearly rainfall.

For each of these climate scenarios, timber harvesting at current harvesting rates was either excluded or allowed in areas zoned for timber production.

Our simulations showed bushfire, not logging, is the biggest threat to habitat availability for Leadbeater’s possum in the Central Highlands. As the cumulative area burnt by fire increased, the quantity and quality of Leadbeater’s possum habitat decreased.

Tthe 2009 Black Saturday fires burned almost half of its habitat, causing its conservation status to jump from endangered to critically endangered.

Bushfires have always been part of Australian landscapes and many species, including Leadbeater’s possum, have evolved alongside them. Eleven years later, Leadbeater’s possum are now recolonising areas burned in the 2009 bushfires.

But as climate change increases the frequency and scale of bushfires, our models suggest the Central Highlands landscape may support less suitable habitat.

Timber harvesting is less of a threat

While timber harvesting compounds the impacts of bushfires on Leadbeater’s possum habitat, across the landscape the effect is small in comparison. Timber harvesting reduced suitable habitat by only 1.4% to 2.3% over 250 years compared to scenarios without harvesting.

Within a coupe (the area of forest harvested in one operation), timber harvesting immediately reduces nesting and foraging habitat. But foraging habitat returns within 10 to 15 years and can be recolonised by Leadbeater’s possum – as long as nesting sites are nearby.

Read more: Logging is due to start in fire-ravaged forests this week. It's the last thing our wildlife needs

Protecting vegetation around waterways, in particular, was critical for the development and survival of hollow-bearing trees in an increasingly fire-prone landscape.

But while timber harvesting had much smaller impacts than bushfires, the two did interact. Over time, the cumulative impacts of timber harvesting and bushfire homogenised forest structure across the landscape, leading to smaller patches of habitat that were less connected.

This increases the risk of local extinction for populations of Leadbeater’s possum living in these patches. 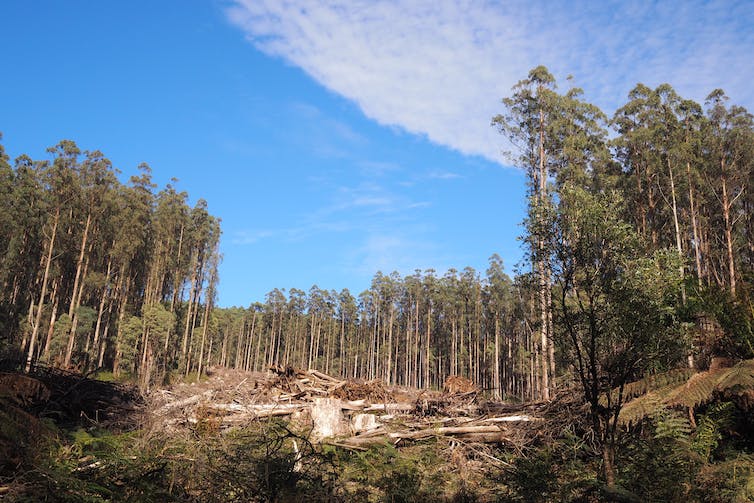 A core question for the conservation of any threatened species is: how well does the network of protected areas protect the species?

Our modelling framework meant we could test whether current areas set aside for Leadbeater’s possum conservation actually provide long-term protection.

Over the next 100 years, less than 50% of existing parks, reserves and timber-harvest exclusion zones will provide continuous habitat for Leadbeater’s possum due to climate change. 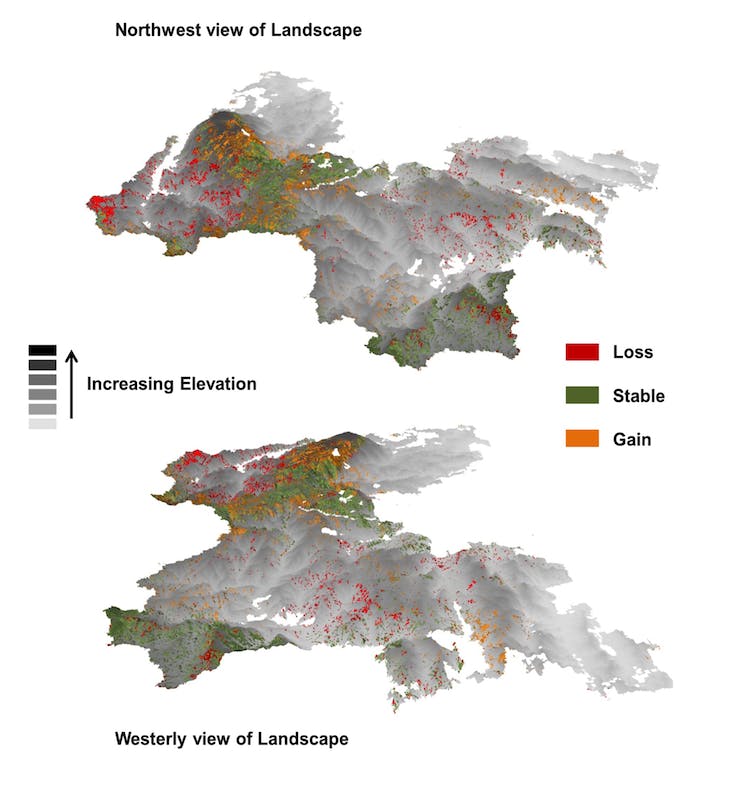 Distribution of Leadbeater’s possum habitat in the Central Highlands landscape modelled in our paper. Stable zones provided suitable habitat throughout the scenarios. Loss and gain were areas that lost or became habitat over the scenario. Author provided

However, we also identified approximately 30,000 hectares of forest outside the current network of protected areas that can provide stable habitat for Leadbeater’s possum over the next century.

It’s vital we put protection zones into the areas possums are likely to migrate to as the climate changes. These areas should be a priority for conservation efforts.

This approach is doomed to fail in dynamic landscapes – particularly in fire-prone landscapes in a warming climate. For conservation planning to be successful, we need coordinated forest, fire, and conservation management that accounts for these dynamics across the whole landscape, not just in individual locations.

Read more: Climate explained: what caused major climate change in the past?

We need a vision for how to make our landscapes more resilient to the growing threat of climate change and provide better protection for the unique flora and fauna that inhabit them.

This will require government agencies responsible for land management and conservation to coordinate current management activities across tenures, while simultaneously implementing future-focused conservation planning. Our landscape-modelling approach provides a first step in that direction.