Although bacteria are single-celled and microscopically small, they still need energy to survive, just like us. One of the most efficient ways of acquiring energy for bacteria is through sweet, soluble carbohydrates: sugars.

In fact, the keen ability of the deadly bacteria Streptococcus pneumoniae to use the plant-derived sugar raffinose may explain how it spreads through the human body.

S. pneumoniae is a bacteria that can quickly develop antibiotic resistance. Each year it causes millions of infections and about one million deaths. Its “ecological niche”, which refers to the natural position of a species within an ecosystem, is our noses and throats, where it doesn’t cause disease.

But from there, S. pneumoniae can spread into the lungs, blood and brain, or more locally into the ear, to cause diseases such as pneumonia, bacteremia, meningitis and otitis media (middle ear inflammation).

Unfortunately, S. pneumoniae is a genetically diverse pathogen, which means it has many different strains. This complicates research efforts to identify how the bacteria spreads into specific sites of the body.

New research published today in Nature Communications Biology by my colleagues and I circumvented these genetic diversity issues by studying closely related strains of S. pneumoniae. We discovered a difference in a gene between two bacterial strains that regulated their use of raffinose, and this resulted in one being more likely to spread and cause disease.

In our previous research, two closely related strains of S. pneumoniae were isolated, one from the blood of a patient and another from the ear. Their sequenced genomes were aligned to pick out differences that may impact how they spread to different parts of the body, and hence how they cause disease.

We found a difference in the regulating gene rafR which is responsible for raffinose uptake. This difference allowed the bacteria in the blood sample to use raffinose more efficiently than in the ear sample.

When infecting mice lungs with S. pneumoniae through their nose, we found the blood sample remained in the lungs, causing invasive disease. However, the ear sample was cleared from the lungs, and was unable to cause disease.

Remarkably, swapping the rafR gene between the strains switched their ability to use raffinose, and the way the disease progressed in each case reversed too. This confirmed the rafR gene was indeed playing a large role in causing disease. 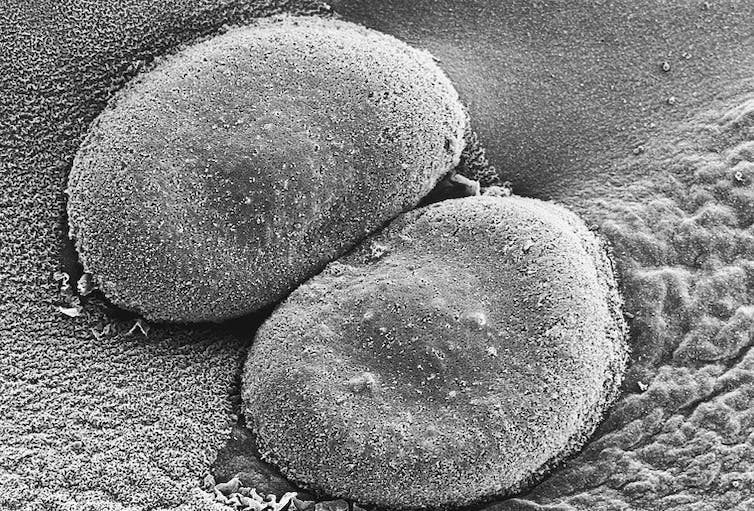 Streptococcus pneumoniae imaged with a scanning electron microscope. This bacteria is a major cause of pneumonia. When present in the nose or throat (its ‘ecological niche’) it benefits from the human body without harming it. Debbie Marshall, CC BY-SA

In our most recent work, we wanted to figure out how this sugar-regulating gene was so profoundly impacting disease progression.

Using a cutting-edge sequencing technique during live mice infections, we discovered the difference in the rafR gene altered how both the mice and the bacteria responded to infection. Notably, strains containing the rafR from the ear sample resulted in more neutrophils, an important immune cell, at the site of infection.

In experiments where neutrophils were depleted in the lungs, the ear sample was not cleared, and the risk of disease was more. This research highlights how this single difference in the gene increased neutrophil levels during infection, preventing S. pneumoniae from causing invasive disease.

Raffinose is mainly found in vegetables, grains and legumes. It’s not known whether the human body ever has high enough levels of it to dramatically impact the likelihood of disease. It may be a carbohydrate similar in structure to raffinose is activating the raffinose regulator rafR instead.

Nonetheless, our research provides insight into how S. pneumoniae causes disease. As we understand what enables this deadly bacteria’s spread through the body, more paths will open up to stopping it.

If this raffinose phenomenon proves to be widespread across S. pneumoniae strains, blocking their ability to use raffinose may prevent them from surviving in, and thus invading, the lungs. 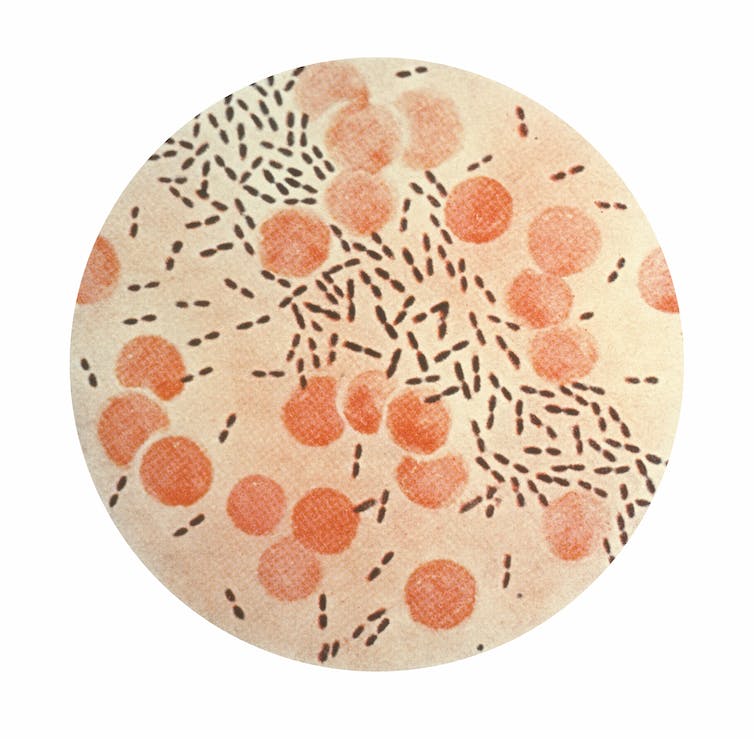 This illustration depicts a gram stained specimen under a microscope, with a number of Streptococcus pneumoniae bacteria (the small black dashes). CDC

Treatments that prevent S. pneumoniae from spreading around the body may be better for preventing disease compared to simply inhibiting or killing the bacteria, as is current practice.

S. pneumoniae can stay in our nose and throats, where it does not cause disease. It plays an import role in this ecosystem. When this bacteria is killed, other deadly bacteria may take its place and spread to sites such as the lungs to cause disease.

The risk in failing to find new treatments

S. pneumoniae’s ability to rapidly develop antibiotic resistance has led the World Health Organisation and US Centres for Disease Control and Prevention to list it as a priority pathogen.

Though vaccines are available, they’re far from perfect and fail to cover all the different strains of S. pneumoniae. If new treatments and vaccines aren’t created soon, the already deadly impact of this bacteria may increase.

Despite the known dangers, research into discovering new antibiotics has been slow. Many treatments in the pipeline don’t provide much benefit over existing antibiotics. Also, effective new treatments usually aren’t implemented widely, and are instead used as a back up in case all else fails. This greatly reduces their profitability, which in turn decreases incentives to make them.

In a worst case scenario, antibiotic-resistant bacteria could kill up to ten million people each year by 2050. To avoid such catastrophe, more research is needed on how bacteria cause disease. And with this knowledge we may be able to lessen the likelihood of future pandemics.

Read more: Saving lives in poor countries is about adapting to what's already working there