The COVID-19 pandemic has recalibrated everything: work, life and play. As work, schooling, socialising and play have moved into the digital and the confines of our homes, cities have become spaces for reimagining — especially as new sites for formal and informal play.

Playgrounds — once filled with children, parents, grandparents and animals — now look like crime scenes, with police tape and all. They have become forbidden territories, temporal lieux de memoirs of how we used to play. And as play goes into the home and digital, we are reminded of the importance of non-digital play in how we socialise and innovate.

Read more: Why working families need parks and playgrounds more than ever

As cities get reconfigured under pandemic restrictions, it is an important time to reflect not only on changing practices of work but also of play. What can be adapted and translated into the digital, and what can’t?

Play — as a form of creativity, sociality and innovation — is a crucial skill for future workforces. Play provides possibilities for reimagining the city. It draws out new and different connections between people, things, buildings and places. And playgrounds, rather than being spaces that set boundaries for play and non-play, remind us of the importance of play in the social fabric of healthy cities.

Play and the city

Cities have long been sites for play. Play scholars, urban theorists, designers and creative practitioners, to name a few, have discussed the important role of urban play and urban playgrounds. They show that play in cities has a complex and uneven history.

Movements such as the 1960s Situationist International and the New Games Movement in the early 1970s sought to turn the whole city into a playground for politics, environmentalism and sociality. These movements subverted traditional ideas of playgrounds as designated and separate areas.

Interestingly, we are now living in times that playgrounds have to become internalised in the home, if we have one. And while, for some, videogames have become a substitute for alternative sociality in a time of physical distancing, it does not replace the sensorial experience and learnings of non-digital play.

Playgrounds have long had an important role in representing cultural and social mores, reflecting the relational, political and psychological dimensions of the city. They expose how a society views childhood, control, leisure and space.

Read more: Psychogeography: a way to delve into the soul of a city

Such interventionist ways of producing urban playgrounds resonate with urban practices today — such as parkour, which subverts “normal” ways of navigating the city.

Over past decades, artists and designers have explored the city’s “playability”, thus expanding our territories of play and heightening their unevenness. Famous collectives such as Blast Theory transform the city into a theatre of life in which videogames are played through physical streets. Initiatives such as Playable Cities in Bristol, Tokyo and Melbourne (to name a few) demonstrate how urban play can choreograph innovative ways of being in the city that emphasise the social, relational and sensory experiences of urban environments.

Read more: Bringing back an old idea for smart cities – playing on the street

Now our mobility has been limited to domestic postage-stamp size, play is even more salient. As artist Kera Hill’s map poignantly shows, how can we playfully reimagine our habitat? 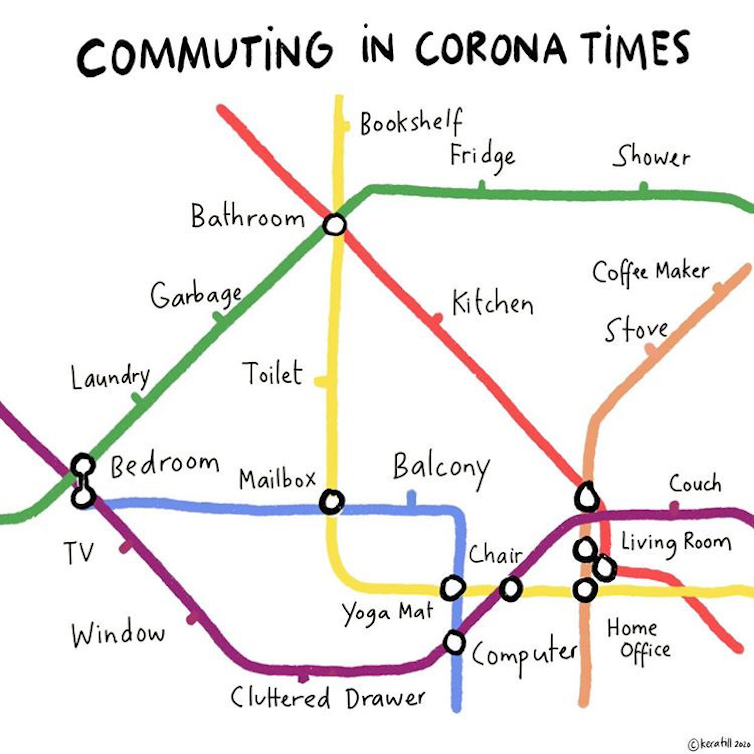 What do our creative maps of our “sanity walks” (escaping Zoomlandia for walking on phone “feetings”) say about how cities might be reimagined by foot? How might a city be reimagined playfully via smell or as a playful space for listening and quiet? Or into a playground that celebrates multiculturalism?

Who (still) has the means to move playfully and turn fear and boredom into play? How can play transform mobility practices to celebrate walking rather than cars?

Read more: Superblocks are transforming Barcelona. They might work in Australian cities too

COVID-19 highlights the unevenness of city geography further, but also shows how we can reimagine play when pushed to the extreme and can (re)connect in hopeful ways. There are lessons to be learnt here. As we go back to the “new normal”, let play help engender our reimagining of cities as future sites for care and social innovation.