Captain James Cook arrived in the Pacific 250 years ago, triggering British colonisation of the region. We’re asking researchers to reflect on what happened and how it shapes us today. You can see other stories in the series here.

The military nature of the Endeavour’s voyage – as part of an aggressive reconnaissance and defence...

Captain James Cook arrived in the Pacific 250 years ago, triggering British colonisation of the region. We’re asking researchers to reflect on what happened and how it shapes us today. You can see other stories in the series here.

The military nature of the Endeavour’s voyage – as part of an aggressive reconnaissance and defence against Indigenous resistance – has historically been overlooked or downplayed.

But musket fire was used many times to teach lessons of British military superiority. Violence underscored almost all of Cook’s Pacific encounters with Indigenous peoples.

In the broader strategic sense – as all 18th and early 19th century scientific voyages were – Cook’s voyages were part of a European drive to conquer. The aim was to claim resources and trade in support of the British Empire’s expansion.

At its heart, Cook’s first voyage was first and foremost a Royal Navy expedition and he was chosen as a military commander who had a background in mathematics and cartography.

Imperial science and ‘ships of force’

During the “great age” of Pacific voyaging, expeditions always had several goals at once.

Cook’s first voyage in 1769 occurred during the perennial cold war of Anglo-French rivalry after what has been regarded as the first global conflict, the Seven Years War (1756-1763). This was also at the height of the promotion of “imperial science” – the idea that scientific advancement and colonial expansion were twin goals.

As industrialisation drove upheaval in Europe, scientific “discovery” was seen as a critical part of establishing, developing and controlling an empire.

The seeds of Cook’s “secret instructions” to seek out the fabled southern continent were sown by an astronomer, Professor Thomas Hornsby.

In 1766 Hornsby called for a “settlement in the great Pacific Ocean” led by “some ships of force”. This expedition would be advantageous to astronomers, but also “add a lustre” to a nation already distinguished “both in arts and arms”. It seemed a natural fit to the scientist Hornsby that the Royal Navy spearhead a British presence in the Pacific.

Even Cook, as was expected of any sea-going commander visiting distant stations, made military reconnaissance notes.

In November 1768, when the Endeavour reprovisioned at Rio de Janeiro, the local Viceroy was suspicious of a voyage supposedly to observe the transit of Venus. He suspected Cook of seeking to extend British influence in the Pacific.

it would require five or Six sail of the Line to insure Success.

Cook felt insulted at being carefully watched and had a low opinion of the Viceroy’s scientific ignorance. But, in fact, the Viceroy was correct.

After opening his supplementary instructions (so-called “secret orders” issued by the British Navy) Cook headed off to attempt to find and claim for Great Britain the supposed southern land thought to exist in the vast southern ocean.

Every European ship that voyaged the Pacific was, in the first instance, a floating fortress; an independent command with the ability to send out small shore parties or to concentrate firepower as needed.

And this was at the heart of all contact, all encounters, all attempts at communication with Pacific and other peoples. Make no mistake, restraint in British policy and conduct with Indigenous peoples in the Pacific emanated from the barrel of a gun.

Cook’s voyaging did not take place on a blank canvas, but across a rich tapestry of thriving, voyaging cultures that were ultimately the target of European aggression.

Cook has often been feted as one of the few 18th century voyaging captains renowned for his “tolerance” of Indigenous people and cultures. But ultimately, this was a tactic used in pursuit of domination. The best military commander only rarely has to resort to open conflict. 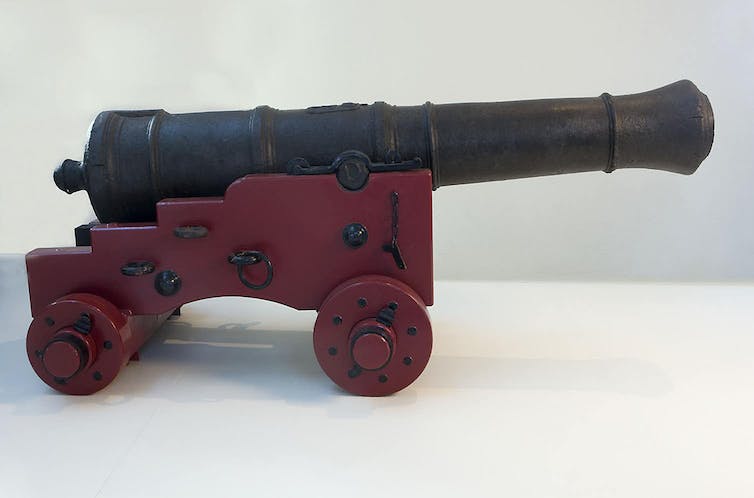 A lesson learned well before Cook

Cannon – such as those Cook dumped overboard to lighten his ship after he struck the Great Barrier Reef in 1770 – make good museum objects and monuments in public parks.

But like those on Cook’s ship the HMB Endeavour, the fact is many cannon on later voyages were hardly used – if ever. The power of artillery fire had been swiftly learned by Pacific peoples since Europeans first arrived in the 1500s, many years before Cook.

Resistance warfare occurred across the Pacific from the 1500s right through to conflicts such as Samoan resistance to German imperial rule in 1908. But like the Australian Frontier Wars, these conflicts have often been neglected by military historians.

Yet conflict across the Pacific was surprisingly inter-connected, and influenced military thinking back in Europe.

A long history of oceanic warfare and navigation

One such example is The Battle of Mactan in 1521, in which Indigenous warriors in the Philippines fought and defeated an overconfident, numerically small Spanish force fighting under Portugal’s Ferdinand Magellan (famous for circumnavigating the globe).

And in 1595, the Spanish navigator Alvaro de Mendana was searching for “Terra Australis” when he arrived in the Marquesas Islands. He was met by several hundred canoes and more than 200 Marquesans were killed in the ensuing conflict.

European voyagers were often unaware that many major island groups across the Pacific were in regular communication with each other.

At least 174 years years after the Spanish devastation in the Marquesan islands, Tupaia – the Tahitian priest and navigator with knowledge of more 70 islands in the Pacific – joined the Endeavour voyage, in effect as a pilot and intermediary.

Tupaia drew a map with more than 130 islands on it, and included the Marquesas Islands on it. He described to Cook and Joseph Banks how, in the distant past, four islands were visited by ships similar to the Endeavour. His map drew on Pacific knowledge of previous conflicts and navigation techniques. 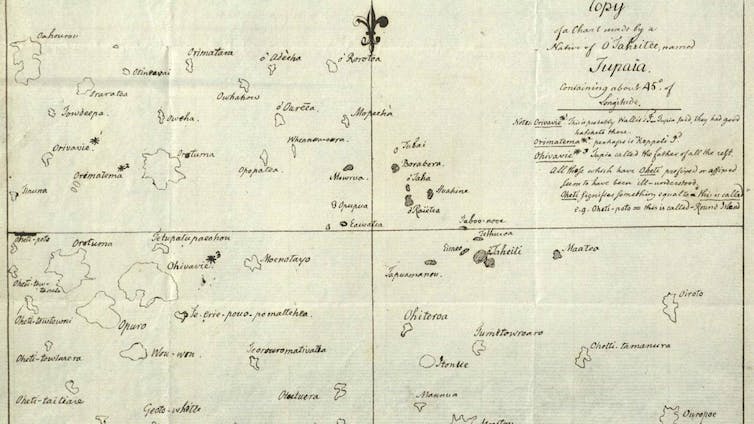 When the British captain Samuel Wallis arrived at Tahiti in the HMS Dolphin in 1767, just two years before Cook, according to Jean-Claude Teriierooiterai, the Ari’i Amo (king) of Tahiti probably recognised these voyagers as the same white people who had attacked the Marquesans.

Around 100 double war canoes loaded with stones attacked the Dolphin for four days until Wallis fired his cannon into the Tahitian fleet (and at villages ashore for good measure). The Tahitians rightly regarded this firepower as all but invincible and soon became hospitable. 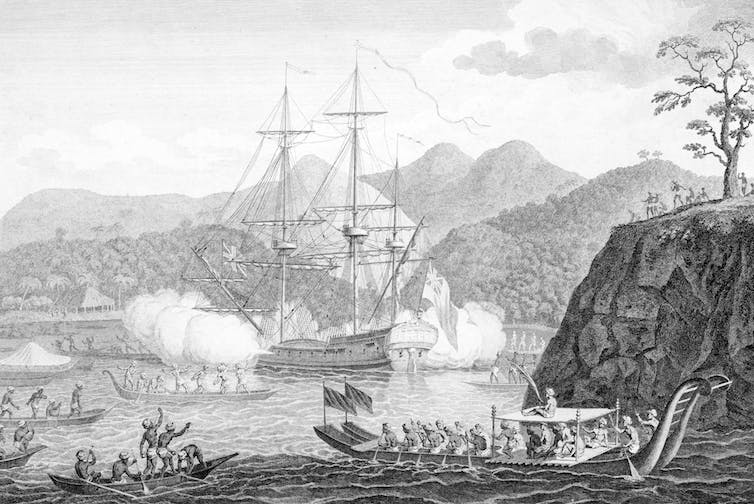 Attack of Samuel Wallis and his crew aboard The Dolphin by the people of Otaheite, Tahiti. Royal Museums Greenwich

When the French voyager Louis-Antoine de Bougainville arrived at Tahiti a year later, he thought the Tahitians the friendliest people in the world, living in a paradise. He did not know that he had Wallis’ cannon fire to thank for his reception.

It is important to remember the military factors in Cook’s and all other voyagers experiences in the Pacific and around Australia. They remind us of what underlined, if not defined, cross-cultural encounter moments.

Addressing the fact that these expeditions were all of a military nature reminds us that European colonisation was resisted from its very first moments.