Our earliest vertebrate (animals with backbones) ancestors laid eggs, but over millions of years of evolution, some species began to give birth to live young.

There is a traditional dichotomy in vertebrate reproduction: species either lay eggs or have live births. However, as is often the case in biology, things aren’t as simple as they first appear, and there are a handful of vertebrate animals that do both.

One of these is the three-toed skink (Saiphos equalis). Our recent research suggests the egg-laying S. equalis may currently be in the process of transitioning from egg-laying to giving live birth.

Studying them gives us a unique opportunity to watch evolution in action. 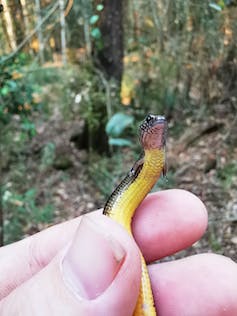 Saiphos equalis has a distinctive yellow belly, and a long, slender body, ideal for its underground lifestyle. Charles Foster

From eggs to babies, and back again?

There are two main reproductive strategies in vertebrates.

Animals that lay eggs are called “oviparous”. For instance, many fish species spawn eggs that are fertilised externally. In other oviparous species, including birds and some lizards and snakes, eggs are fertilised inside the mother, an eggshell is added, and then eggs are laid.

Depending on the species, much or all of the nutrition needed to grow a healthy baby is supplied in the egg yolk.

In contrast, “viviparous” animals carry embryos internally until they are fully developed. The embryos can rely entirely on yolk for nutrition, or the parents can provide supplementary nutrition, sometimes via a placenta (as in humans).

There is strong evidence that egg-laying is ancestral to live birth, meaning it came first. Many physiological changes were necessary for live birth to have evolved from egg-laying. With this transition, some structures were lost, including the hard outer eggshell. Other mechanisms were gained to ensure embryonic survival within the parent, including the supply of adequate oxygen and water during development.

The evolution of live birth has occurred frequently, including at least 121 times in independent groups of reptiles.

Evolutionary “reversals” to egg-laying are much rarer, probably because regaining the physiological machinery for producing eggshells would be exceptionally difficult.

Despite the vast differences between egg-laying and live birth, some species can do both. This phenomenon called “bimodal reproduction” is exceptionally rare. There are more than 6500 species of lizards worldwide, but only three exhibit bimodal reproduction.

Read more: Lizards help us find out which came first: the baby or the egg?

We’re lucky enough to have two of these in Australia. Our research group at the University of Sydney studies the bimodally reproductive three-toed skink, in the hope of understanding how live birth evolved.

In northern NSW, the three-toed skink gives birth to live young, but near Sydney, they lay eggs. Even though they reproduce differently, previous research has shown these lizards are a single species. 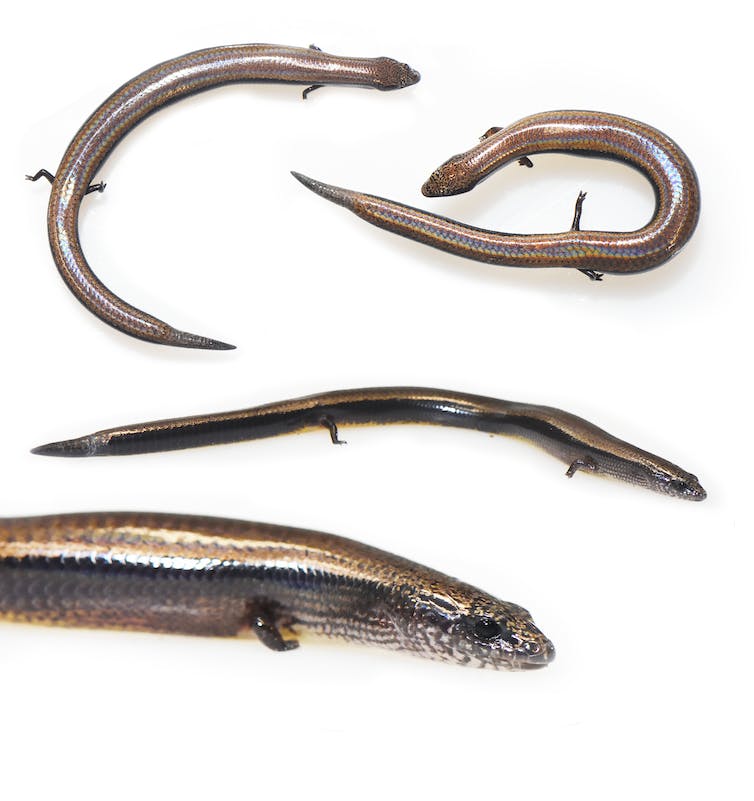 The three-toed skink displays geographic variation in reproductive mode. It has four very tiny legs, and only three toes per foot. Yi-Kai Tea

Even the egg-laying members of the species are odd, as the eggs are retained within the mother for a relatively long time. After being laid, ordinary skink eggs are incubated for at least 35 days before they hatch, but some three-toed skink eggs hatch in as few as five days after being laid.

One female even laid eggs and gave birth to a live baby in the same litter. 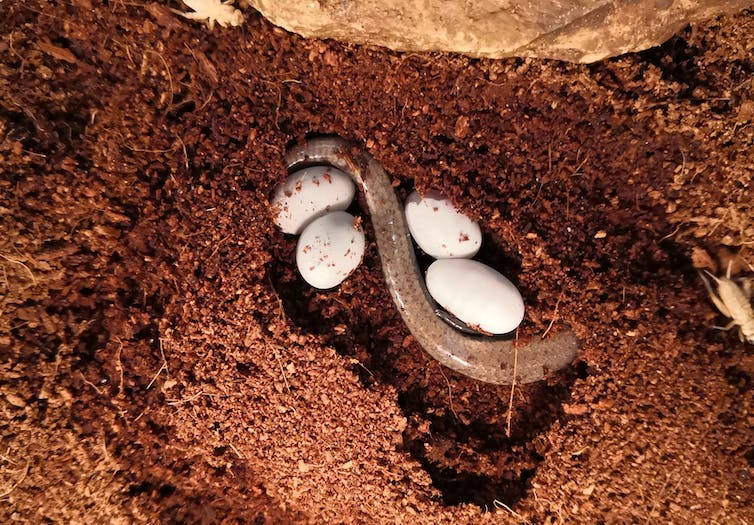 An egg-laying three-toed skink from near Sydney with its clutch of eggs. Stephanie Liang

Read more: The first known case of eggs plus live birth from one pregnancy in a tiny lizard

The genetics behind different reproductive modes

Most aspects of an animal’s development are controlled by its genes, but not every gene is always active. Genes can be expressed (switched on) to different degrees, and gene expression can stop when not needed.

An egg-laying skink uterus undergoes only a couple of genetic changes between being empty and holding an egg.

A live-bearing skink uterus is different. It undergoes thousands of genetic changes to help support the developing baby, including genes that probably help provide oxygen and water, and regulate the mother’s immune system to keep the baby safe from immunological attack.

Unexpected similarities between the egg-laying and the live-bearing

Our research measured changes in gene expression between egg-laying and live-birth in the three-toed skink. We investigated how the expression of all genes in the uterus differed between when the uterus was empty and when it held an egg or embryo.

But surprisingly, when we looked at the uterus of the egg-laying S. equalis, we found these also undergo thousands of genetic changes, many of which are similar to those in their live-bearing counterparts. 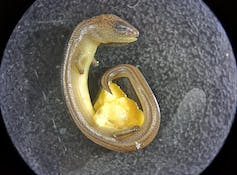 Embryos of egg-laying Saiphos equalis are nearly completely developed at the time of laying. Stephanie Liang

Some of the most important genetic changes in gene expression in egg-laying S. equalis allow embryos to develop within the mother for a long time. These genes also seem to allow the uterus to remodel to accommodate a growing embryo, and drive the same kinds of functions required for the embryonic development in live-birthing three-toed skinks.

Are ‘reversals’ to egg-laying easier than previously thought?

Our findings are important because they demonstrate that egg-laying three-toed skinks are an evolutionary intermediate between “true” egg-laying and live birth.

We now know that uterine gene expression in egg-laying S. equalis mirrors live-bearing skinks much more closely than true egg-laying skinks. These results may explain why it’s possible for a female three-toed skink to lay eggs and give birth to a live baby in a single pregnancy.

The similarities in gene expression between egg-laying and live-bearing three-toed skink uteri might also mean “reversals” from live birth back to egg-laying could be be easier than previously thought. However, this may be restricted to species in which live-birth has evolved recently, such as the three-toed skink.

Read more: Why we're not giving up the search for mainland Australia's 'first extinct lizard'