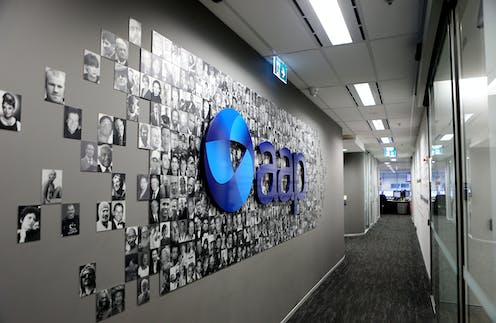 I learnt about this, I must admit, from a report in The Age online, but in days past this is the sort of news that would have been covered by AAP. The loss of this highly regarded news service is a major blow for Australian journalism and a nail in the coffin for a world in which facts and evidence matter.

Many people outside thinning ranks for Australian journalists will have little idea of the extent to which AAP photographers, editors and reporters have been the media industry’s engine, but I do.

AAP journalists are unsung heroes of journalism. When I worked for the Sydney Morning Herald and The Age in the early 2000s, I used to check my ropey shorthand of press conferences against AAP and often unearthed embarrassing errors, sometimes ones that would have got us sued.

A good AAP photo often meant the difference between a page one lead or writing for the spike. AAP also regularly broke major news with coverage that would lead all the newspapers and TV news bulletins.

At Nine newspapers, the sub-editors would often cross-check my work against reporting from AAP, making corrections and adding vital additional information. Sometimes AAP would get a credit for this contribution, but often not. It’s telling that in four years of closely critiquing Australian journalism at Media Watch I can’t remember coming across a single substantial error that was the sole fault of AAP.

Now all this careful work will stop, another victim of the new world created by Facebook and Google in which attention is all that matters and truth is a virtue sometimes paid in lip service but never dollars.

Now there will be fewer reporters, fewer photographers, fewer sub-editors and no AAP. A whole vast enterprise of accuracy and reporting has been shuttered by foreign-owned digital platforms that obliterated the line between fact and fiction, and made a killing in the process.

Every honest journalist in Australia today should feel guilty about the way we have secretly relied on AAP. We almost never gave it enough credit, but nor are we to blame.

As long as disregard for facts remains the zeitgeist there will be no role for the likes of AAP and no money to pay for this work. As editor of The Conversation I hope audiences are coming to understand that truth, accuracy and transparency really do matter. The growing audience for our work that pairs journalists with academic experts is cause for hope.

But there is still a long way to go and in the meantime I hope the 180 talented AAP editors, photographers and reporters find new homes where their skill and diligence is truly appreciated.

And this time around, I hope they get proper credit for their work.