The Adelaide Biennial of Australian Art – now in its 30th year – has a tradition of measuring the pulse of contemporary art practice. This iteration is no different.

Art Gallery of South Australia curator Leigh Robb approaches contemporary anxieties, the challenges of technology, the unfolding anthropogenic tragedies and the continuing fallout from empire colonialism in this exhibition. She wrangles these fears under the compelling umbrella of Monster Theatres. In a sense, Robb picks up where Nick Mitzevich left off in his 2014 biennial Dark Heart, probing the guilt and grief of the national psyche. Six years on, the anxieties feel greater and more urgent.

Monsters have always been a cultural trope; in an accompanying display, Julie Robinson explores this phenomenon with a look at historical monster prints. Once, monstrous imagery by Durer, Goltzius and Goya depicted hybrid creatures with an assortment of limbs, bodies and heads and catered for societal follies and fears; their message was understood then as a moralistic warning or omen. The visual language of today differs greatly.

The 24 solo projects in the biennial by Australian artists include two major performance artists, Stelarc and Mike Parr.

Each day for six days, Parr reads a 100-page script based on a Roland Barthes text in Reading for The End of Time. He has modified the text to stress repetitious words and phrases and synonyms, so the audience hears the same phrases coming up again and again. His only props are a glass of water and a reading lamp. As each day progresses, Parr reads this text against the video playback of the previous day. His monster is the cognitive dissonance this causes. At the time of writing, his voice was still holding out. 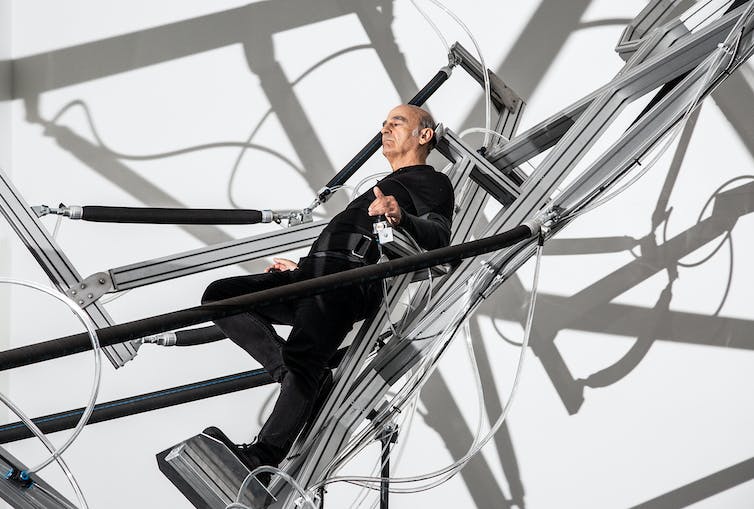 In Reclining StickMan, Stelarc placed himself on a large nine-metre robot made for the exhibition space. Over two five-hour performances on the opening weekend, he choreographed its movements and sounds. Audience members contributed via a touch screen, as did remote users. The robot’s movements and sounds stem from a mathematical algorithm and human interaction. This is the most recent and perhaps most spectacular of Stelarc’s work in which his own body facilitates complex interactive systems between the human and the machine.

There are some deeply psychological works on show, including Brent Harris’s grotesque paintings exposing the trauma and menace of his abusive father. Judith Wright’s haunting Tales of Enchantment are a memorial to a lost child she imagines in a shadowy surreal underworld.

Muslim artist Abdul Abdullah’s Understudy sits alone in a picture theatre. Viewers can, if they wish, take a seat next to this slightly hunched-over figure dressed in faux designer human clothing, but they will soon notice the hood he is wearing partly conceals his monkey face – he is one of the rare and endangered Yunnan snub-nosed monkeys. The monkey, also a familiar figure in monster films such as Godzilla and King Kong, reflects the artist’s outsider experience in post-September 11 Australia.

Karla Dickens’ Dickensian Country Show feels like a sideshow with its lights and glitter, but its imagery is a dark exposé of Aboriginal members of the country circus and boxing troupe whose blackness was the attraction, the oddity, the “other”. 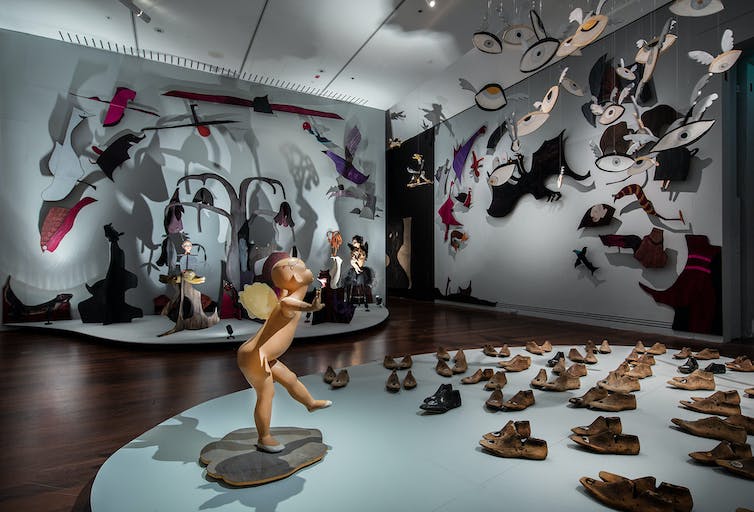 Monster Theatres lends itself to the idea that the exhibition space is a site for speculation and wonder. In Transmission, experimental sound artist Julian Day’s found organ pipes emit a monstrous and resonating timbre that echoes through the gallery’s atrium, on the hour. On the opening weekend of the biennial, Day orchestrated a moving performance called A Civic Space in the nearby Freemasons Lodge with a group of singers and brass musicians improvising abstract sounds, augmented by the organ.

Ecological threat is imminent and urgent in Monsters Theatre. Quandamooka artist Megan Cope’s sound installation Untitled, Death Song replicates the ghostly warning sound of the bush stone curlew, an endangered nocturnal bird. The “instruments” are re-purposed remnants from mining and deforestation projects. The auger drill, oil drums and rocks, along with a piano, ring through gallery space. Their haunting sounds are arresting enough to make viewers sit and listen. 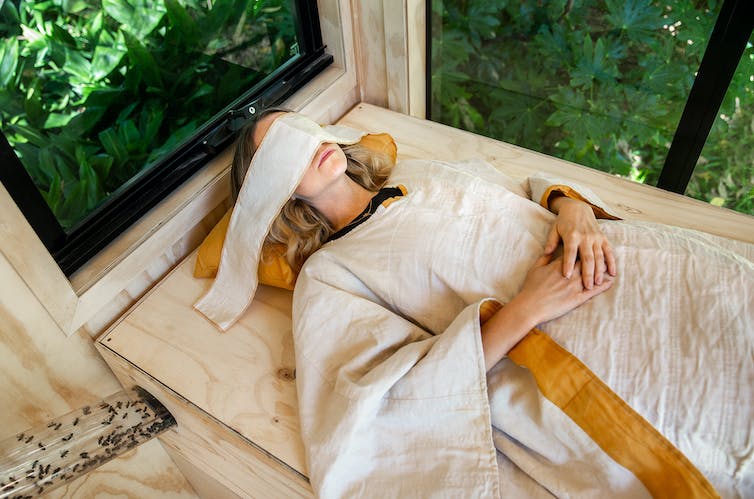 Biennial visitors are invited to spend the night with some bees in Mike Bianco’s Anthrocomb. Photo: Saul Seed/AGSA

The biennial extends to the nearby Adelaide Botanical Gardens with sculptures by Mark Valenzuela and Michael Candy in the Palm House and the Bicentennial Conservatory. Candy’s slowly moving and mesmerising Big Dipper hangs high above Conservatory’s entrance while Mark Valenzuela’s Once Bitten, Twice Shy pops up in a lily pond.

In his purpose-built bee house Anthrocomb, Mark Bianco counters the collapse of bee colonies by literally sleeping with them in the structure. He invites audience members to do the same.

Julia Robinson’s Beatrice, an ill-fated toxic creature – part-human, part-flower – sits in the Museum of Economic Botany. Her writhing soft sculpture tentacles in beautiful purples and mustards point to a creature trying to avoid a monstrous fate.

Glass artist Yhonnie Scarce, of the Kokotha and Nukuna peoples, reclaims the Deadhouse in the Gardens, once used to house Aboriginal body parts for “medical purposes”, by filling it symbolically with healing glass-fabricated bush bananas. 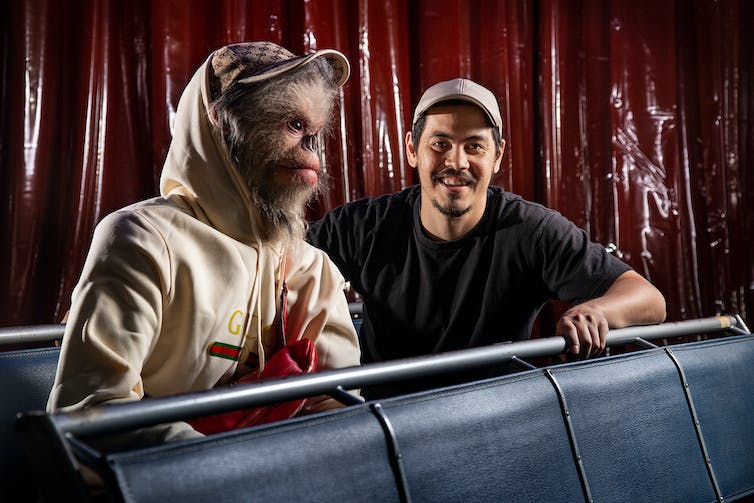 Abdul Abdullah with his work, one of several exploring feelings of ‘otherness’. Photo: Saul Seed/AGSA

This biennial brings a refreshing psychological depth, reflective gaze and energy to our fears. Robb has imaginatively added a new ingredient to the cultural mix: the monster. The exhibition underscores how in colonial, post-colonial and decolonial times, and now the anthropegenic era, the monsters are not only within us, they have always been us.

Monster Theatres is on show at the Art Gallery of South Australia until 8 June.