With the announcement that China’s Sun Yang has been banned from swimming for eight years, FINA, the world governing swimming body, must take stock of how it oversees one of the most popular and high-profile of the Olympic sports ahead of this year’s Tokyo games.

It would now seem obvious that, taking the lead from athletics and tennis, FINA should establish an independent integrity unit to investigate and prosecute doping and similar offences.

In a decision announced Friday, the Court of Arbitration (CAS), sport’s self-styled world supreme court, confirmed that Sun would be banned from competitive swimming for eight years. His swimming future now rests largely on one final avenue of appeal to the Swiss Federal Tribunal.

Read more: Why drug cheats are still being caught seven years after the 2012 London Olympics

This has always been a big global story: Sun is one of the most successful swimmers of all time, and one of China’s most beloved sports stars. A three-time Olympic gold medallist, he has 11 world championship golds, and is second only to the legendary US swimmer Michael Phelps in men’s individual events.

It was at last year’s world championships in Korea that silver medallist, Australia’s Mack Horton, famously protested against Sun, during the podium ceremony for the 400 meters freestyle. 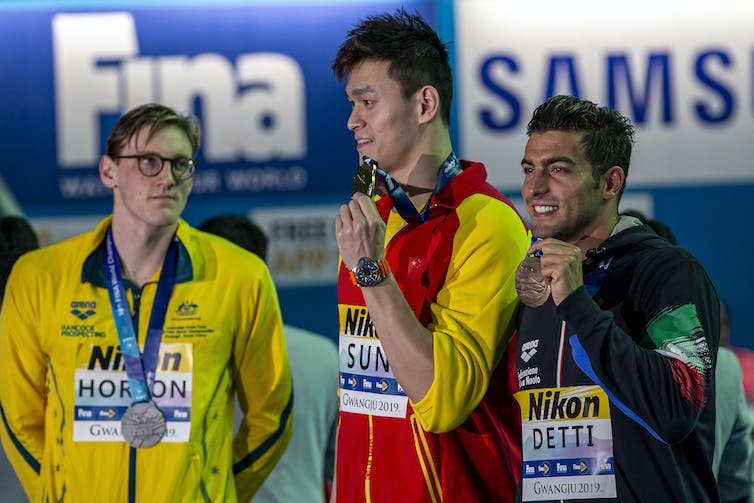 Horton’s protest related to the fact that Sun, having previously served a three-month ban for a doping infraction in 2014, had been involved in an incident with doping control officers in September 2018.

Having given a sample to the testers at his home, Sun became concerned about their conduct and accreditation. This concern eventually led to the vial containing Sun sample being smashed by one of the swimmer’s entourage.

Initially, Sun’s behaviour in this case merely attracted a reprimand. An investigation carried out by FINA concluded that, although Sun’s actions were incautious, they could be justified given the testers’ grave procedural errors and misconduct.

The World Anti-Doping Agency (WADA), the global body for anti-doping standards, later took the view that FINA’s approach was overly lenient. WADA appealed to CAS and a public hearing was held in Switzerland in November.

Having deliberated on what they heard at that eleventh-hour hearing, which was initially marred by poor translation, the three arbitrators delivered a summary of their verdict last week.

Basically, CAS held that the procedural concerns Sun had about the testing process in September 2018 either did not occur or were not sufficiently compelling to justify tampering with the sample container. Given this was his second anti-doping infraction, an eight-year sanction applied.

It must be remembered the charge against Sun is that of tampering with a sample – it is not a charge or “conviction” relating to doping. Sun’s sample taken in September 2018 was never tested, and this seems to be the reason why the arbitrators have not decided to strip him of the medals he obtained at the world championships in 2019. In this, as with other aspects of the Sun decision, we must await the publication of the arbitrators’ full, reasoned award.

Sun now has until the end of March to lodge an appeal at the Swiss Federal Tribunal (SFT) and has already indicated that he will take that option. As it happens, on various technical grounds – one relating to an unsubstantiated claim of bias against WADA’s chief lawyer – Sun’s lawyers have already been to the SFT on three separate occasions. They will now likely go for a fourth time, and it is likely to end in disappointment.

He will not get a full re-hearing at the SFT, and the grounds of appeal will be limited to narrow procedural issues only. An example would be whether the CAS hearing in some way unfair – ironically, the fact that it was held in public at Sun’s request may tell against him here. Another consideration may be whether the sanction was disproportionate – given the eight-year ban is mandated in the World Anti-Doping Code, this ground would likely not succeed. One final consideration may be whether the poor translation service at the CAS hearing might be a ground of appeal – again, unlikely, given that it was Sun’s legal team that hired the translator.

Arguably, Sun’s strongest point has always been the general one, outlined in the seminal CAS case of Quigley v UIT. It is that, while the principle of strict liability applies to athletes in anti-doping control, it should equally apply to testers to strictly comply with all administrative aspects of the anti-doping process. Whether the SFT would entertain an argument that goes right to heart of the current anti-doping policy globally is unlikely.

While Sun grapples with an effective end to his career and WADA, unsurprisingly, feels vindicated, FINA must now reflect on its governance of its sport.

Lately, it has had a fractious relationship with some of its leading participants who sought successfully, on threat of litigation, to compete in a privately funded international swimming league. An integrity commission would seem a vital next step.

The reaction to the Sun ban on social media from China has been predictably ferocious. One knock-on effect of the Sun decision may be a greater focus from countries such as China and Russia on the fact that, in terms of the nationality of those appointed to hear cases, CAS, sport’s supreme court, appears to be systemically Eurocentric in nature.

It seems almost certain that Sun will not compete at Tokyo 2020. Attention now moves at CAS and on doping in sport to the case against Russia and its athletes.

The reaction to the Sun verdict will be a mere ripple in a pool compared to that which will greet a similar verdict against Russia.