Despite a wealth of evidence to the contrary, some still propagate the myth that the world will need Australian coal for decades to come. Last weekend Opposition Leader Anthony Albanese joined in, saying thermal and metallurgical coal mining and exports would continue after 2050, even with a net zero emissions target.

Metallurgical coal (or “coking coal”) is mined to produce the carbon used in steelmaking, while thermal coal is used to make steam that generates electricity.

Albanese argues there’s no replacement for metallurgical coal, but this is not the case. The assertion stems from a fundamental misunderstanding of modern steelmaking, and places Australian manufacturers at risk of missing out on massive opportunities in the global shift to a low-carbon economy.

Just as thermal coal can be replaced with clean energy from renewables, we can use low-emissions steel manufacturing to phase out metallurgical coal.

The problem with steel

Steel is the second-most polluting industrial material in the world after cement, causing 7-9% of global emissions.

Australia manufactures a relatively small amount of steel – 5.3 million tonnes, or 0.3% of world output. Yet, we’re one of the biggest exporters of raw materials for steel production. 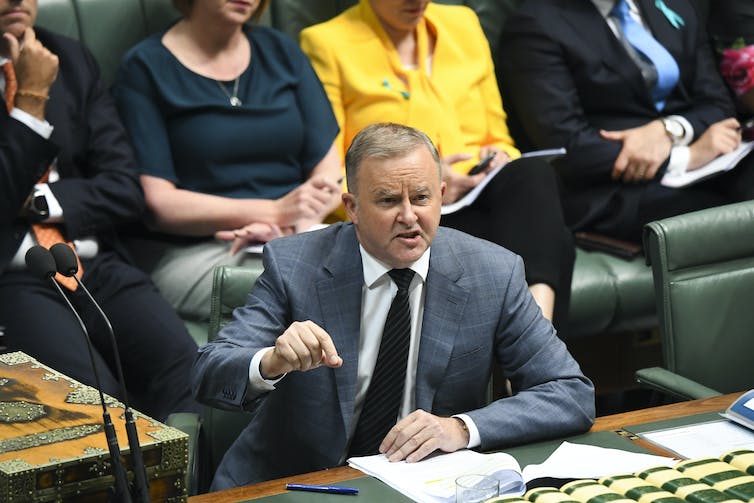 There is potential to not only strengthen Australia’s steel manufacturing industry, but also to grow it using the ore (rock containing metals like iron) we currently export and our extensive renewable energy sources.

Doing so would work to our manufacturing strengths, history, abundant resources, and would cater to the future low-carbon market that will still require steel.

There are a few ways we can do this.

Seventy-two per cent of the world’s virgin steel (steel made from ore, not from recycled material) is created from a high emissions manufacturing process – via the integrated steel-making route. This involves a blast furnace and a basic oxygen furnace, using coal, coke, iron ore and gas.

We can replace the coal and coke with rubber tyres that would otherwise end up in landfill, as shown by University of NSW’s Professor Veena Sahajwalla, who dubbed this process “green steel”.

Right now we can also boost the recovery of steel from landfills in greater percentages. According to a 2018 national waste report, Australia generated an estimated 67 million tonnes of waste in 2016-17.

But the best way to reduce emissions in steel manufacturing is to shift to “direct reduction”. This process produces more than 60 million tonnes of primary steel each year.

And almost 50 plants around Australia already make steel this way. It results in 40% lower greenhouse gas emissions, while supporting a viable and thriving manufacturing industry, which uses our own raw materials rather than exporting them.

Read more: Enough ambition (and hydrogen) could get Australia to 200% renewable energy

But there’s no reason these fossil fuels can’t be entirely replaced with renewable hydrogen in the near future.

We’ve seen this from two leading direct-reduction technologies, called Midrex and Energiron. Both use fossil fuels, but also with a high proportion of hydrogen. In fact, Energiron facilities can already use up to 70% hydrogen, and they’ve also trialled 100% hydrogen.

Read more: For hydrogen to be truly 'clean' it must be made with renewables, not coal

In fact, SSAB recently announced they’re bringing their plans forward to will produce fossil-free steel by 2026.

The key message is this: it is possible to create low-emissions steel, without metallurgical coal. And it is already happening.

With the support of industry and government, non-metallurgical, low-emissions steel could provide an opportunity to create jobs, develop a decarbonised industry and extend the steel market’s contribution to Australia’s economy.

Not to mention what products we can produce from the steel – adding value in many more ways than just exporting ore – and taking advantage of an increasing consumer demand for low carbon products. This is especially relevant for communities transitioning away from fossil fuels.

There’s not much stopping low-emissions steel from forming a core new Australian industry. Australia must address the costs involved in transitioning the infrastructure, to upgrade plants and processes.

But it needs to start with working from facts – and effective government support and vision.

Read more: How hydrogen power can help us cut emissions, boost exports, and even drive further between refills