Drinking patterns tend to change as we age. The older we get, the more likely we are to drink on a daily basis. But older adults often perceive that drinking is only a problem if a person appears drunk.

Anything above this is considered risky drinking because it increases the risk of alcohol-related diseases, such as cancer, and injuries.

Read more: Older Australians' drinking on the rise and they don't know the risks

Older adults are more vulnerable to alcohol’s interactions with medicines, medical conditions that can be made worse by alcohol, and age-related changes in the metabolism of alcohol that mean we become more intoxicated from drinking the same amount of alcohol. Alcohol can also increase the risk of falls.

For some older people, this means that maintaining their current levels of alcohol consumption as they age inadvertently places them at risk.

Alcohol and many medications don’t mix

Older adults are more likely to be taking a number of medications; about two-thirds take four or more.

Many of these medications can interact with alcohol.

Our research among risky drinkers aged 58 to 87 found 92% were taking medications that when combined with large amounts of alcohol could lead to serious adverse effects. This included common medications prescribed for high blood pressure.

For 97% of the people we studied, drinking alcohol reduced the effectiveness of the medication. This included Nexium, a medication commonly prescribed to treat gastric reflux.

Why are older Australians drinking more?

While age-related factors such as bereavement and retirement can increase the likelihood of drinking at risky levels, most often alcohol is part of an enjoyable social life as people age.

In our research, alcohol use was closely linked to social engagement: more frequent opportunities to socialise were associated with more frequent drinking. 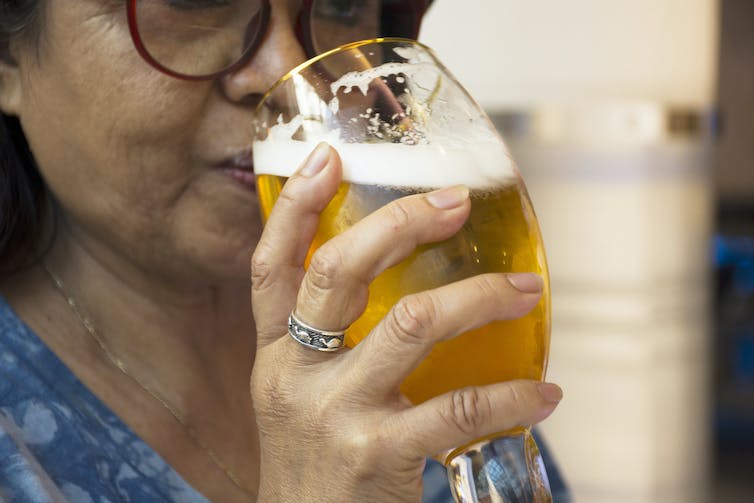 For many older drinkers, alcohol is part of their social life. Shutterstock

In a recent study of Australian and Danish women drinkers aged 50 to 70, those who were drinking at risky levels said overwhelmingly their drinking was a normal, acceptable and enjoyable part of their lives, so long as they appeared to be in control.

In doing so, they were able to mentally distance their drinking from current and future health problems.

Australia’s draft alcohol guidelines don’t provide any specific recommendations for older adults, beyond those recommended for adults in general.

Rather, they recommend older adults speak with their GP to determine an appropriate level of drinking based on their medical history and medications they are taking.

But our research found only 30% of older men and 20% of older women could recall their GP asking about their alcohol use over the past 12 months, regardless of what medication they were taking.

Even fewer could recall their community pharmacist asking about their alcohol use. 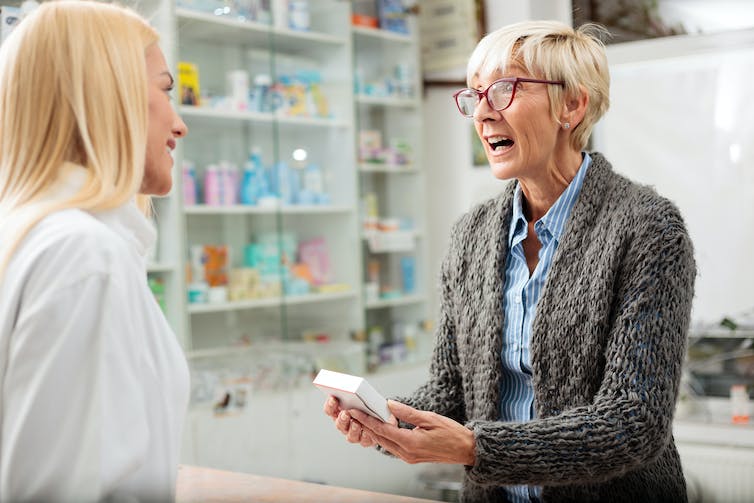 Pharmacists should be asking about alcohol use when dispensing medicine. Shutterstock

Promisingly, almost all participants were open to their GP asking about their alcohol use, particularly in relation to medication.

And more than half believed it was OK for their community pharmacist to raise this issue with them when being dispensed medication.

Recognising the social context to older adults’ drinking and other drug use, and understanding how they make sense of these behaviours, is an important first step in preventing and minimising harm.

Read more: Hazardous drinking: research finds that 40% of people over 50 drink too much

At a population level, public health messages must resonate with older people by reflecting the context in which they drink.

At a community level, GPs and community pharmacists are well placed to help older adults minimise the risk of harm, but may require further training to develop their skills and confidence in broaching this topic with patients.

This Victorian initiative asks patients at GP clinics to complete a screening test on a iPad and notifies the GP if risks are identified. The person can then participate in an OWL early intervention program of education, brief counselling and harm-reduction advice.

So far the program has led to participants reducing their alcohol consumption and having fewer problems with medicines that interact with alcohol.

Such a scheme could be replicated across the country, and has the potential to improve lives, reduce preventable disease and premature deaths, and save the health system money.