In the wake of last week’s horrific murder of a woman and her three children in Brisbane at the hands of her estranged partner, Social Services Minister Anne Ruston announced A$2.4 million in federal funding for four programs to change men’s behaviour.

The ultimate aim is to achieve positive behaviour change in men and increase the safety and well-being of their partners, ex-partners and families. But what do these programs involve? And do they work?

What are men’s behaviour change programs?

Men’s behaviour change programs are aimed at men who have been formally involved or implicated in a domestic and family violence incident, as well as those who recognise their behaviour as problematic and want to change.

The programs target men who are already using controlling, coercive and intimidating behaviours. This includes psychological, economic, emotional, sexual and physical violence and abuse. They aim to challenge and change abusive behaviours and the attitudes that underpin them.

Typically programs run for three to six months. They include an initial assessment that at a minimum checks readiness for group work and commitment to the program. This process should include providing information to the men on family violence and collecting reports from those affected by the violence.

If ineligible or choosing not to participate, alternative options like counselling or another program are explored. Victoria’s peak body, No to Violence (NTV), also recommends providing information on family violence and seeking the man’s permission to contact women and children to offer assistance, support and referral.

If eligible and willing, men will enter the group-based program where they will develop and commit to a “group agreement” on behaviour and participation. In partnership with facilitators, participants will develop the agreement and decide on a process to alert men who are breaking these agreements. This includes ways to respond to breaches when they happen. Sessions must be run by two facilitators, one female and one male.

There is no standard structure or delivery requirements for across state and territory jurisdictions, but the men’s behaviour change – minimum standards manual, developed by NTV, has been highly influential nationally.

It includes guidance on core messages such as the lasting negative effects of male family violence, the difference between a feeling and a behaviour and how we’re in control of the latter, and that the safety of women and children always comes first.

It also promotes skills such as men learning to recognise the many different ways they can be violent and controlling; prioritising settings and relationships (such as friendships) that support their choice to be non-violent; and identifying thoughts, feelings and physiological reactions that are part of the “winding up” process, and how to use “winding down” thoughts rather than resorting to violence. 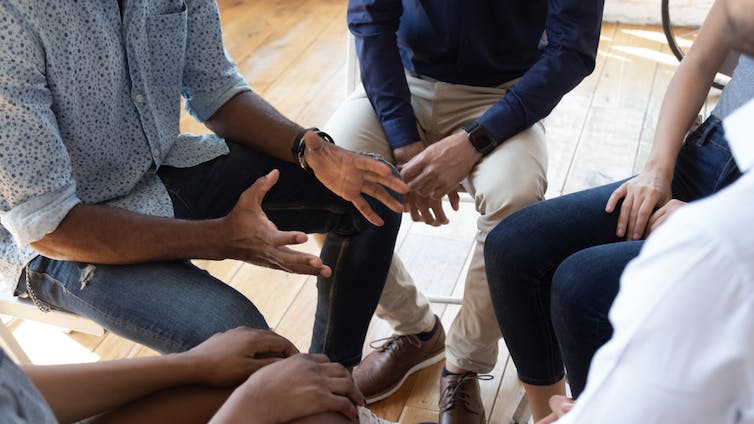 How do these programs work?

Men’s behaviour change programs use activities such as presentations, role play and group discussion to explore beliefs and understanding of entitlement, power dynamics in relationships, risk factors for abuse such as drug and alcohol consumption, and emotional regulation.

The aim is to shift attitudes and beliefs that are well-established drivers of men’s violence against women, so as to change their behaviour.

However, when it comes to whether or not these programs do that, the evidence is scarce.

Australia’s National Research Organisation for Women’s Safety (ANROWS) recently reviewed the quality and effectiveness of these programs in Australia.

The review found several issues with how these programs are, or are not, evaluated. This included differences in what is measured (attendance versus demonstrated changes in attitudes), how change is measured (by self-reporting versus formal measurement tools), and a lack of follow-up to measure long-term change.

Perhaps most telling was the review’s focus group with female partners and ex-partners of participants. These women reported relief that formal action was being taken and supported the group-based approach. However, despite some reports of feeling less fearful, concern and doubt remained that changes seen would be short-lived once the program was complete.

Read more: How can we make families safer? Get men to change their violent behaviour

To really work, we need to start earlier

Men’s behaviour change programs are targeted at men already engaging in abusive behaviours. To achieve real change, we need to start earlier. We need to be looking at ways to challenge social norms and create new ones among men and boys.

We need to focus on educating about consent, developing skills around difficult conversations and learning to recognise and counteract harmful gender norms before these attitudes are ingrained.

Lasting change is only possible through major societal change. We need to pull out all the stops to achieve our ultimate aim: a world where women, like Hannah Clarke, and their children, like Aaliyah, Laianah and Trey, get to keep their lives.