As this week showed, a clean end to a ministerial scandal is seldom possible. Even so, the aftershocks of the sports rorts affair have been major, and they’ll continue to plague the government.

Deputy Prime Minister Michael McCormack is still standing, but you can bet he’s a lot more unnerved than he’s willing to admit.

McCormack won’t need to look over his shoulder at what Barnaby Joyce is doing – the frustrated backbencher will keep himself in full view. Circumstances alone will dictate whether he’ll have another tilt at McCormack’s leadership.

Meanwhile, the Senate has established an inquiry likely to bring to light new entrails on the sports affair before it reports, on party lines, on March 24. If those entrails stretch to the Prime Minister’s office, that will be embarrassing for Scott Morrison.

But the policy level is where the ripples are most serious. These few days have highlighted, and worsened, Morrison’s difficulties in managing the always volatile climate debate within his government and making whatever adjustments he might judge necessary before the 2022 election.

The road from a minister rorting a sports grants scheme to greater trouble with climate policy may not seem an obvious one, but it was very direct.

Bridget McKenzie’s forced resignation triggered the challenge by Joyce, whose pitch (and that of his supporters) involved a retro climate policy, including spruiking vociferously the virtues of coal.

Their voices will become louder. The rebels are emboldened, with little to lose. Matt Canavan, who quit cabinet to back Joyce, is on the backbench, a coal disciple, and a darling of many in the resources sector.

With the resignations of McKenzie and Canavan, both senators, the Nationals have no frontbenchers in the upper house, giving the maximum opportunity for some freelancing there – just like Barnaby did when a senator, all those years ago.

And with his leadership less than solid, McCormack will have little flexibility on climate policy, even if he wanted it.

When asked by The Conversation on Thursday about the proposal for a new coal-fired power station in Queensland, McCormack was strong in his advocacy (while stressing it had to “tick all the boxes”, including environmental ones).

“Should it measure up, I think it’d be a great thing for Gladstone,” he enthused, “because what we want to do is make sure that that resources-rich area in and around Gladstone is well serviced by the energy needs that that wonderful port city is going to require”.

One of the constraints on Morrison nuancing climate policy in any significant way will be the October election in Queensland, where the Liberals and Nationals are one party (the LNP).

The federal Nationals will be heavily focused there. Some Nationals sources believe that in the state election, the minor-party threat is less the Hanson forces than the Katter’s Australian Party. KAP has three seats already (compared to the Hansonites’ one) and could get more.

It was significant Bob Katter this week handed over leadership of KAP to his son Robbie, who leads it in Queensland, so enhancing Robbie’s status.

Some Nationals fear if KAP grew strong enough, it could eventually become the new National party in Queensland.

As the hardline Nationals flex their muscle on climate, Tuesday’s Coalition party meeting saw Liberal moderates, including Katie Allen, from the Melbourne seat of Higgins, and Trent Zimmerman, a faction leader in NSW, also willing to speak out.

Allen said privately (on WhatsApp) what the government was doing on climate action needed better cut-through to the electorate.

The Liberal moderates may become more assertive as time goes on, especially given new additions last May. In recent years the moderates have been drowned out by the right or missing in action (notwithstanding contributions by Russell Broadbent on refugees and the role of some on same sex marriage).

McCormack’s reshuffle of his frontbench has been cautious, as he seeks to protect his back. Those who voted for him were the winners. He had no truck with the suggestion to him by one Joyce supporter to give his attacker a spot. 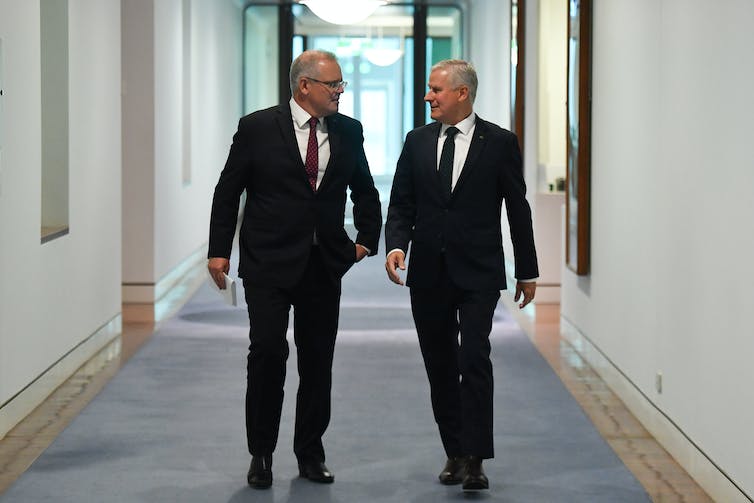 Lukas Coch/AAP The return to cabinet of Darren Chester is welcome. He’s a measured voice, progressive within the Nationals. Queensland’s Keith Pitt has jumped from backbench to cabinet, thanks to Canavan’s self-destruct. He takes Canavan’s old resources job, plus the poison chalice of water. Pitt’s a man of very forthright opinions. In 2018 he quit a junior frontbench post declaring, “I will always put reducing power prices before Paris”. McCormack on Thursday slapped down Pitt’s pro-nuclear stand even before he was sworn in. Despite several new women entering the party room at the election, only one woman, Michelle Landry, is on the front bench, and she remains an assistant minister, albeit with wider duties than before. In a messy, destructive week, the government had two brighter spots. The less important of these was the opposition’s lack lustre performance - surprising, given the ammunition it had. It concentrated on the PM’s missteps over the fires, which had received massive attention already. More crucial for the government - just days after McKenzie fell, Angus Taylor was shored up. Read more: Grattan on Friday: Angus Taylor's troubles go international, in brawl with Naomi Wolf After months of argument about the allegedly forged document Taylor used to attack Sydney’s Lord Mayor Clover Moore and her council over their carbon footprint, the Australian Federal Police has announced it is taking its probe no further. “The AFP assessment of this matter identified there is no evidence to indicate the Minister for Energy and Emissions Reduction was involved in falsifying information,” the AFP statement said. It added that “the low level of harm” and Taylor’s apology to Moore, along with “the significant level of resources required to investigate were also factored into the decision not to pursue this matter. "The AFP now considers this matter finalised.” The mystery of the document remains, perhaps never to be solved until Taylor’s memoirs. But its potential to be lethal for him has passed.