Have you ever clapped your hands to get someone’s attention? The resulting “crack!” sound is hard to ignore, rising above and penetrating through any background noise. 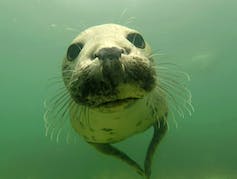 Now imagine trying to do it underwater – you would be unlikely to achieve quite the same impact. Amazingly, new footage released this week in the journal Marine Mammal Science shows breeding grey seals doing just that: they clap at each other to warn off competitors and attract potential mates. Grey seal clapping underwater. Filmed by Ben Burville as part of Project Grypus.Why is this unusual? Like their land-living relatives, marine mammals primarily communicate vocally - think of dolphin whistles or the famous song of humpback whales. Grey seals are no exception, and in fact can be surprisingly versatile. Besides the bizarre “rup” and “rupe” calls these seals normally make in the wild (see the video below), some captive animals have even been trained to perform the Star Wars theme tune! But vocals are only half the story. Many marine mammals also produce percussive sounds, such as by slapping the water with their flippers or tails. Normally this happens at the surface, and only involves one flipper at a time. What makes grey seals different is that - like humans - they literally clap their forelimbs together, and they do it entirely underwater. Read more: Sharp claws helped ancient seals conquer the oceans The behaviour that took 17 years to film Recording the claps was far from easy, and took no less than 17 years of scuba diving by “seal diver” and marine biologist Ben Burville. 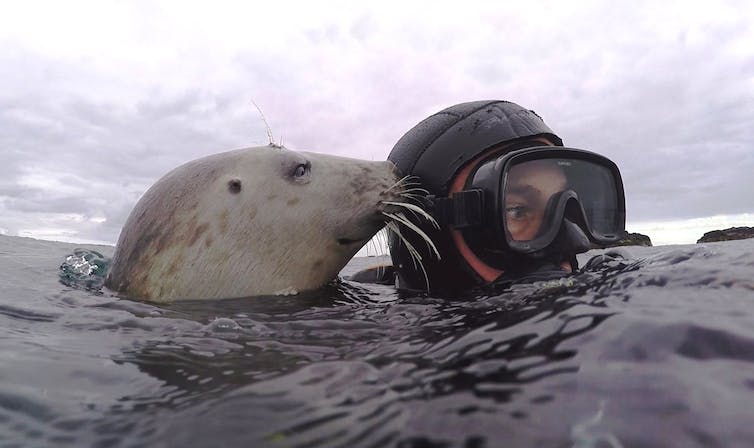 Seal diver Ben Burville with one of his dive buddies - a wild grey seal off the Farne Islands, UK. Photo provided by Ben Burville. Ben was no stranger to the clapping sound itself. For years, he had heard it when diving with grey seals during their breeding season. Similar noises had also been detected by researchers using underwater microphones, but had been mistaken for a vocal signal. It wasn’t until he actually saw a big male clapping together its paw-like flippers that Ben finally identified the true source of the sound. Yet the claps were quick and difficult to film; by the time he pointed his camera, things had usually moved on. Years passed until finally, in October 2017, Ben caught the behaviour on film while diving near the Farne Islands, UK. A male grey seal performed seven claps right in front of him while his camera was rolling.

Grey seals use their short paw-like forelimbs to make loud clapping sounds underwater. Filmed by Ben Burville. Illustrations by David Hocking. Why do grey seals clap? At first, the discovery might not seem that surprising. After all, seals are famous for performing this behaviour in zoos and aquaria. However, there is a crucial difference: whereas captive animals (usually fur seals or sea lions) have been trained to clap for our entertainment, grey seals do so in the wild and of their own accord. So why do they do it? Imagine being in a noisy room, with everyone around you chatting away. Getting attention can be difficult, unless you make a statement. That’s exactly what a clap is: a sharp, loud noise that rises above the background chatter. Usually it’s males that do the clapping - sometimes by themselves, and sometimes at each other. Depending on the context, the claps may help ward off competitors and/or attract potential mates. Similar functions underlie display behaviour in many other species. Think of a chest-beating male gorilla, for example. Like seal claps, those chest beats carry two messages: “I am strong, stay away”, and “I am strong, my genes are good.” Male gorillas beat their chest as a show of strength to competitors and potential mates.Do other marine mammals clap? The short answer seems to be no, or at least not as far as we know. Clapping seems to be a genuinely novel behaviour that evolved in seals only once. Perhaps larger species such as sea lions are prevented from doing it by increased water resistance. 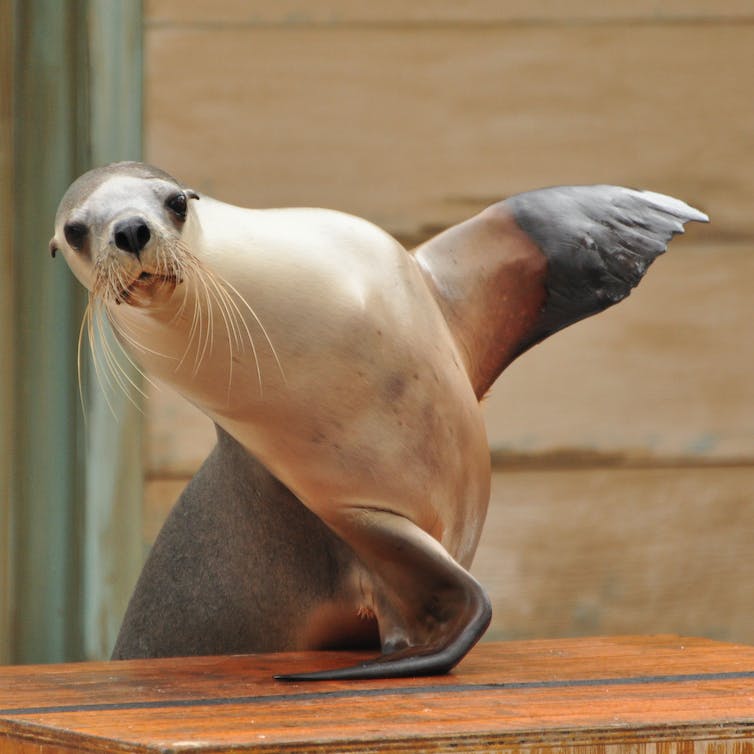 Australian sea lions have long flipper-like forelimbs that may create too much drag to clap effectively underwater. Photo by David Hocking Of course, it is also possible that some other species also clap, but haven’t done so in front of a camera. Read more: When mammals took to water they needed a few tricks to eat their underwater prey Even if clapping were unique to grey seals, it seems the sharp signal it generates is important for many marine mammals. Several dolphins, whales and seals produce similar sounds via tail or flipper slaps, or even gunshot-like vocalisations. The oceans are a noisy place, after all, and it can be important to stand out in a crowd. Wild harbour seal slapping the water to create a loud noise - possibly to scare fish out of hiding so that they can be caught.What should we learn from this? Clapping seals show us just how much we still don’t know about the remarkable mammals in our oceans. Clapping seems to be an important social behaviour, hence anything that disturbs it may impact breeding success and survival. Human noise pollution is known to interfere with other forms of marine mammal communication, including whale song. Loud industrial noises could conceivably disturb grey seals (and other species that rely on acoustic signals) in similar ways. But if we do not know a behaviour exists, we cannot easily act to protect it. Understanding the animals around us better can therefore help us to protect them and their way of life. 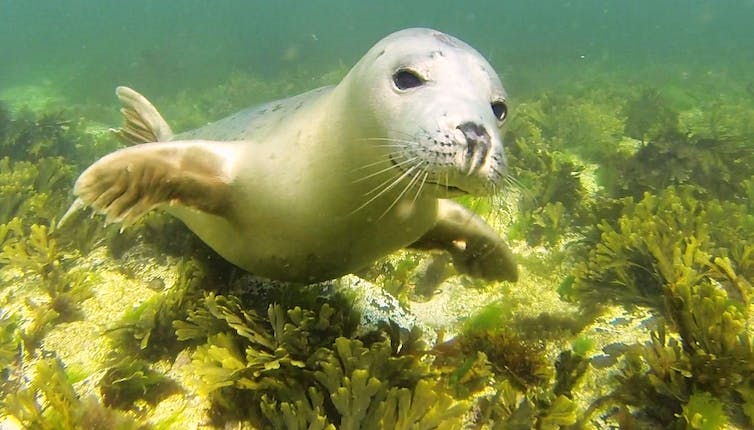