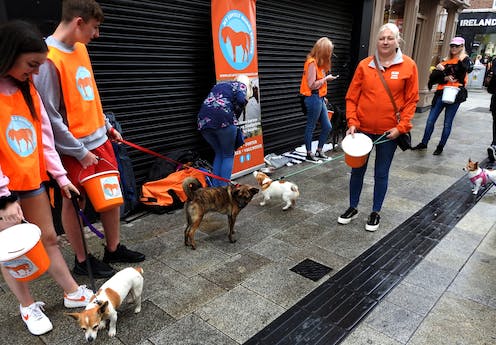 The Queensland government’s proposed electoral laws risk being struck down by the High Court if they remain in their current form. This is because they hamper the ability of charities to advocate for their causes and limit the diversity of voices in political debate.

Charities are prohibited by law from supporting or opposing candidates or parties in elections, but they can still advocate for policy changes on behalf of those they aid. In doing so, they play an important role in supporting the equal participation in civil society of people who would otherwise be marginalised and excluded from it. They can raise social issues that may be relevant in elections.

Read more: Changing the Australian Constitution was always meant to be difficult – here's why

Through their advocacy, charities are often critical of government policies, regardless of which party is in office. They become seen as nuisances, or even opponents, by political parties.

While governments prefer to keep their critics quiet, the High Court has stressed the importance of equal participation in political sovereignty and not allowing the rich to drown out the voices of others. So muzzling charities comes at a constitutional risk.

Over the years, various means have been employed to silence charities from engaging in political communication, especially around election time. These include placing limits on their charitable status, banning them from using government funding for advocacy, and placing restrictions on the tax-deductibility of donations to them.

Another less visible, but equally effective, method is to impose excessive administrative burdens upon them if they engage in the kind of advocacy that might influence voting in an election. This means the only responsible choice for charities is to stay silent so as not to waste their resources on administration or legal advice.

This occurred in New South Wales in 2012, when a law was passed so political donations could only be made by people on the electoral roll. The consequences for charities were they could not join together and donate funds to a peak body to run an issues campaign for them, because a charity is not a person on the electoral roll.

The law also required charities to certify that every donation used for electoral communication was from a person on the electoral roll. The administrative burden was impractical and unaffordable. The person wearing a koala suit on the street could not whip out a copy of the electoral roll and check the identity of a person every time they put some money in the bucket.

This law was struck down by the High Court when challenged in 2013. The court accepted that third parties such as unions, corporations and charities play a legitimate and significant role in the freedom of political communication required by the Constitution.

The Commonwealth proposed a similar approach in 2018. This time it was in the context of preventing foreign donations from influencing elections. Charities spending money on political advocacy over the disclosure threshold would have had to get statutory declarations from donors, witnessed by a Justice of the Peace (JP), declaring the donor was an “allowable donor”, not a foreign citizen.

So the person in a koala suit with a bucket would have needed to trail around with a JP and a pile of statutory declaration forms, while insulting donors by questioning their citizenship or visa status. This wasn’t really feasible.

Fortunately the Commonwealth government changed its approach after concerns were raised before a parliamentary committee. To its credit, the government narrowed the definition of political expenditure. This meant it was less likely to pick up advocacy by charities, and removed the requirement for third parties to register, unless they engaged in very high levels of electoral expenditure. It also significantly reduced the administrative burdens on charities and other third party campaigners before the bill was passed.

The proposed changes in Queensland

Queensland’s recent proposed electoral reforms have a worthy aim. The bill will reintroduce caps on both political donations and electoral expenditure for political parties, candidates and third party campaigners. This is a good step towards reducing the corrosive effect of money on elections.

But one significant flaw in the bill is its burdensome effect on small third party campaigners such as charities and other community groups.

The bill would require third parties to register with the Queensland Electoral Commission if they spend as little as A$1,000 on electoral expenditure during the 12 months prior to an election.

A registered third party must have its own agent, who is subject to serious penalties if any rules are broken. Third parties that are volunteer community groups will find it extremely difficult to get someone to take on such risks.

A registered third party must also set up a separate state campaign account into which it must pay any donation made to it for the purposes of incurring electoral expenditure. Such donations have to be accompanied by a “donor statement” setting out the purpose of the donation and the particulars of the donor and the recipient.

This is all very well when large donations are being made for electoral expenditure purposes. But it’s a serious burden for charities that rely on lots of small donations and spend a relatively small amount of money on advocacy that may be intended to influence voting.

The effect is to cause charities to silence themselves to avoid the cost and the bother of complying with all the rules.

Those few charities that can rely on a small number of large donations are also disadvantaged. A maximum of $4,000, received over four years, from any one donor can be spent on electoral expenditure. In contrast, corporations and other third parties that do not need to rely on donations can spend what they like on electoral campaigns, up to a cap of $1 million.

This exacerbates the inequity in Australian political debate, allowing the voices of the wealthy to drown out the voices of charities that advocate for the disadvantaged. This is precisely the problem that has led to previous electoral laws being struck down in New South Wales.

If the Queensland bill were enacted in its present form and challenged in the courts, there is a risk the High Court would regard it as an unconstitutional burden on freedom of political communication. If so, the offending provisions would be struck down as constitutionally invalid.

It would be preferable for the Queensland government to revise its proposed laws to limit their impact on issues advocacy by charities. Charities are already subject to exacting legislative requirements to ensure they’re accountable to their members and are limited in their political activity. There is no need to replicate or extend such constraints at the state level.