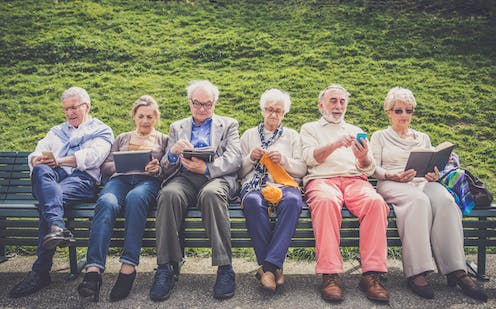 Seniors may not enjoy the stereotype of struggling with technology, but undeniably many older people do have difficulty mastering their devices.

My colleagues and I recently conducted a survey of 750 older Australians (mostly over 70). We found high levels of digital device ownership, but only “moderate” levels of confidence in using them.

Many seniors who struggled with digital devices felt they lacked support. In particular, they said their own families often displayed a “can’t be bothered explaining” attitude.

Unsurprisingly, this attitude is very unhelpful. There is plenty all of us can do to help the seniors in our lives get connected.

Our survey found seniors were most comfortable using computers and had the most difficulty with tablets. More concerningly, we discovered that seniors who go looking for advice often face serious obstacles.

Among those who asked for tech advice, 44% were most likely to approach their adult children first. A further 23% listed their children as their second choice. But they weren’t always helped with a smile.

Many respondents said their adult children didn’t have the patience or willingness to help. Follow-up interviews with older Australians revealed that explaining new apps and constantly evolving technologies to someone who isn’t a digital native can carry a lot of emotional tension.

Some survey participants didn’t want their older parents to have more technology, because they thought this would result in more work for them.

As one participant, Mary, related:

My daughter wouldn’t allow me to have a computer. She said I didn’t need it!

On the other hand, some older people simply didn’t want to ask for help because they didn’t wanted to demonstrate their independence and not seem technologically inept.

In some cases, people avoided asking for help so as to avoid conflict or maintain family relationships.

We discovered grandchildren were generally more eager to give advice, but only 7% of older people went to them first. Seniors saw grandchildren as more willing to help, and sometimes willing to trade technology advice for other kinds of help such as swimming lessons.

When asked about this, 72-year-old Jenny said:

My grandchild is far more tolerant than my grown-up adult children are.

But while their hearts are in the right place, grandkids tend to fix a specific problem with a device without actually teaching their grandparent how to do it themselves.

After their own children, the next most common place for seniors to turn was professionals. Fifteen per cent of older people said they would go to professionals first, and 21% said the pros would be their second option.

However, professionals in retail outlets were not well trusted, and were seen to have a sales agenda that pushed unwanted products.

Around 13% of seniors surveyed reported asking their spouse or partner first for advice, while 8% asked friends their own age. However, in both cases the advice was not always helpful and sometimes plain wrong.

What can you do?

There are a few simple ways you can help your older friends and relatives reach across the digital divide.

First, try to make an effort to invest some time in helping a senior use their device. While it’s constructive to teach them a specific task, it’s also about boosting their overall confidence and helping them live more independently.

Also, send them links to instructional videos on YouTube. Our study found that once older people are past a certain knowledge threshold, they can independently search for information on how to use technology.

Read more: What younger people can learn from older people about using technology

YouTube turned out to be one of seniors’ biggest allies for learning new digital skills. It allows them to search for content and watch at their own pace, as many times as needed.

YouTube is good because you can run a YouTube, and as you’re running it, you can stop it, do what you’ve got to do, and then come back and run it a bit more, and do the next part of it.

We found seniors also profited from collective computer classes, such as those held at the University of the Third Age, seniors’ computers clubs, and local libraries. These classes gave them a chance to learn the skills themselves in an open, social environment.

It removed the pressure from learning, while retaining their cherished autonomy.

While some seniors are very savvy with a tablet – after all, it was Boomers who led the computer revolution we now enjoy – the rapid pace of technological change combined with an ageing society presents a serious issue.

To face this issue, as a first step we should ask ourselves – as children, grandchildren, spouses and friends – what’s our role in helping those older than us keep up with technology?