Neanderthal hunting grounds in southern Siberia — the Charysh River valley, with Chagyrskaya Cave in the centre of the photo. Institute of Archaeology and Ethnography of the Siberian Branch of the Russian Academy of Sciences, Author provided

Neanderthal (Homo neanderthalensis) fossils were first discovered in western Europe in the mid...

Neanderthal (Homo neanderthalensis) fossils were first discovered in western Europe in the mid nineteenth century. That was just the first in a long line of surprises thrown up by our closest evolutionary cousins.

We reveal another in our new study of the Neanderthals who lived in Chagyrskaya Cave in southern Siberia around 54,000 years ago. Their distinctive stone tools are dead ringers for those found thousands of kilometres away in eastern and central Europe.

Chagyrskaya Cave in southern Siberia’s Altai Mountains and excavation of the archaeological deposits. Institute of Archaeology and Ethnography of the Siberian Branch of the Russian Academy of Sciences, Author provided

The intercontinental journey made by these intrepid Neanderthals is equivalent to walking from Sydney to Perth, or from New York to Los Angeles, and is a rare example of long-distance migration by Palaeolithic people.

For a long time Neanderthals were seen as intellectual lightweights. However, several recent finds have forced a rethink of their cognitive and creative abilities.

Neanderthals are now believed to have created 176,000 year-old enigmatic structures made from broken stalactites in a cave in France, and cave art in Spain that dates back more than 65,000 years.

Our knowledge of their geographical range and the nature of their encounters with other groups of humans has also expanded greatly in recent years.

We now know that Neanderthals ventured beyond Europe and western Asia, reaching at least as far east as the Altai Mountains. Here, they interbred with another group of archaic humans dubbed the Denisovans.

Traces of Neanderthal interactions with our own ancestors also persist in the DNA of all living people of Eurasian descent. However, we can still only speculate why the Neanderthals vanished around 40,000 years ago.

Other questions also remain unresolved. When did Neanderthals first arrive in the Altai? Were there later migration events? Where did these trailblazers begin their trek? And what routes did they take across Asia?

Chagyrskaya Cave is nestled in the foothills of the Altai Mountains. The cave deposits were first excavated in 2007 and have yielded almost 90,000 stone tools and numerous bone tools.

The excavations have also found 74 Neanderthal fossils – the richest trove of any Altai site – and a range of animal and plant remains, including the abundant bones of bison hunted and butchered by the Neanderthals.

We used optical dating to determine when the cave sediments, artefacts and fossils were deposited, and conducted a detailed study of more than 3,000 stone tools recovered from the deepest archaeological levels. Microscopy analysis revealed that these have remained intact and undisturbed since accumulating during a period of cold and dry climate about 54,000 years ago.

Using a variety of statistical techniques, we show that these artefacts bear a striking similarity to so-called Micoquian artefacts from central and eastern Europe. This type of Middle Palaeolithic assemblage is readily identified by the distinctive appearance of the bifaces – tools made by removing flakes from both sides – which were used to cut meat.

Micoquian biface used as a meat knife by Neanderthals at Chagyrskaya Cave (left, showing both sides); and butchering of horse carcass using an experimentally manufactured biface (right). Institute of Archaeology and Ethnography of the Siberian Branch of the Russian Academy of Sciences, Author provided

Micoquian-like tools have only been found at one other site in the Altai. All other archaeological assemblages in the Altai and central Asia lack these distinctive artefacts.

Neanderthals carrying Micoquian tools may never have reached Denisova Cave, as there is no fossil or sedimentary DNA evidence of Neanderthals there after 100,000 years ago.

The presence of Micoquian artefacts at Chagyrskaya Cave suggests at least two separate dispersals of Neanderthals into southern Siberia. Sites such as Denisova Cave were occupied by Neanderthals who entered the region before 100,000 years ago, while the Chagyrskaya Neanderthals arrived later.

The Chagyrskaya artefacts most closely resemble those found at sites located 3,000–4,000 km to the west, between the Crimea and northern Caucasus in eastern Europe.

Comparison of genetic data supports these geographical links, with the Chagyrskaya Neanderthal sharing closer affinities with several European Neanderthals than with a Neanderthal from Denisova Cave.

When the Chagyrskaya toolmakers (or their ancestors) left their Neanderthal homeland in eastern Europe for central Asia around 60,000 years ago, they could have headed north and east around the land-locked Caspian Sea, which was much reduced in size under the prevailing cold and arid conditions. 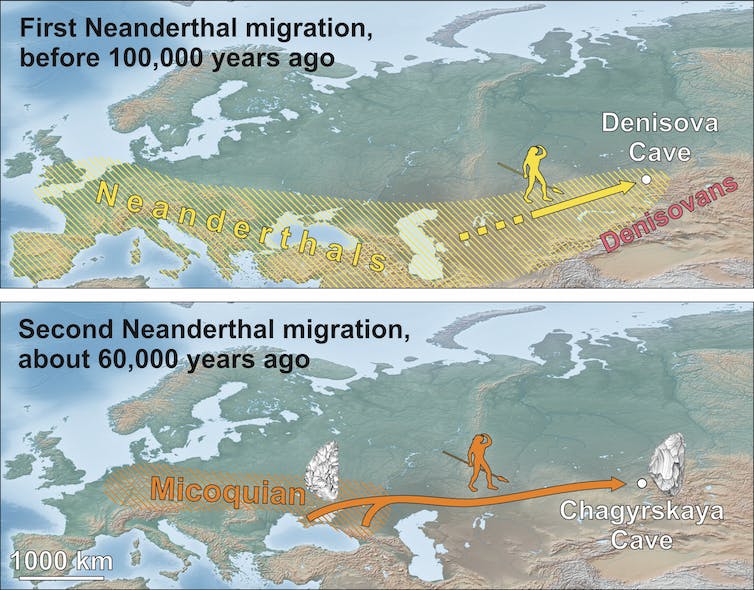 Their intercontinental odyssey over thousands of kilometres is a rarely observed case of long-distance dispersal in the Palaeolithic, and highlights the value of stone tools as culturally informative markers of ancient population movements.

Environmental reconstructions from the animal and plant remains at Chagyrskaya Cave suggest that the Neanderthal inhabitants survived in the cold, dry and treeless environment by hunting bison and horses on the steppe or tundra-steppe landscape.

Our discoveries reinforce the emerging view of Neanderthals as creative and intelligent people who were skilled survivors. If this was the case, it makes their extinction across Eurasia even more mysterious. Did modern humans deal the fatal blow? The enigma endures, for now.