We already know how deadly this summer’s fires have been for mammals, birds, and reptiles across Australia. But beyond this bushfire season, many of those same species – including our bats, which make up around a quarter of all Australian mammal species – are facing another devastating threat to their survival.

White‐nose syndrome has recently decimated bat populations across North America. While the fungal pathogen responsible for this disease, Pseudogymnoascus destructans, currently doesn’t occur in Australia, the fungus is virtually certain to jump continents in the next decade.

Our recent research, published in the journal Austral Ecology, attempted to quantify this risk – and the results are not encouraging. Up to eight bat species occupy caves in south-eastern Australia that provide conditions suitable for the fungus to grow. 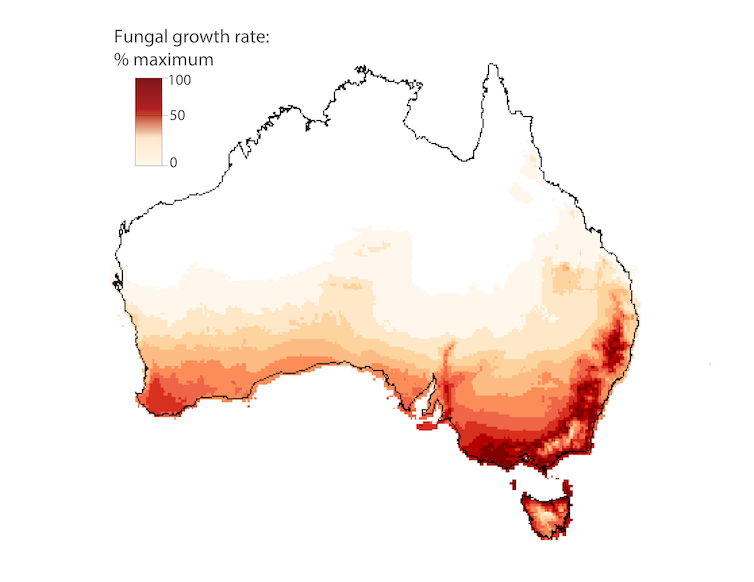 Even before this summer’s fires, seven of those types of bats were listed on state or federal legislation as threatened with extinction. This includes the critically endangered southern bent-winged bat (Miniopterus orianae bassanii), a species whose caves would all provide optimal conditions for growth of the fungus. 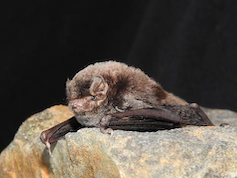 Millions of bats wiped out in North America

White-nose syndrome was first detected in the United States in 2006 at a popular tourist cave in the state of New York. Since then, the disease has spread across North America, killing millions of bats in its wake, with many local populations experiencing 90 to 100% mortality.

The novel pathogen hypothesis explains why P. destructans has such catastrophic impacts on North American bats: the immune system of these species is evolutionarily naive to this fungal attack. Accordingly, in Europe and Asia, where P. destructans is endemic and widespread, few bats exhibit white‐nose syndrome and mortalities are rare.

Australia’s unique wildlife is inherently at risk from invasive novel pathogens because of its long‐term biogeographical isolation. Thus Australian bats, like their distant North American relatives, probably lack an effective immune response to P. destructans and would be susceptible to developing white-nose syndrome. 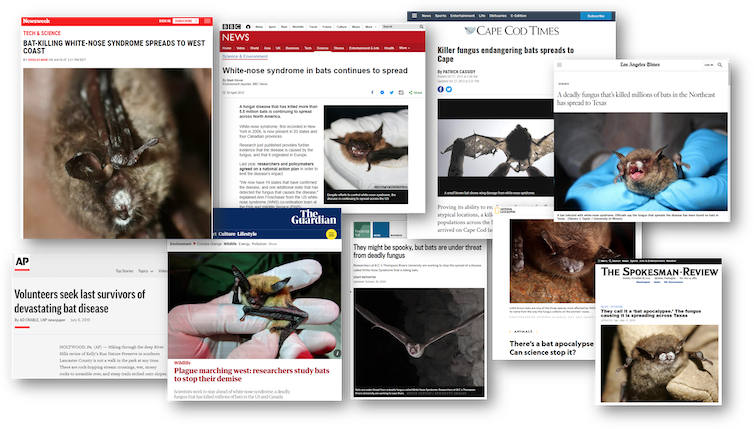 Since its detection in the United States in 2006, white-nose syndrome has received extensive media attention globally.

Hibernation is the key risk period

Most fungal pathogens grow best at cool temperatures, and a high body temperature in mammals and birds provides an effective barrier against fungal diseases. The fungus causing white-nose syndrome is also cold-loving, ceasing to grow at temperatures above 20°C. The only time it can infect and kill bats is when they hibernate.

Bats go cold (use torpor) during hibernation to prevent starvation over winter in temperate climates. Hibernating bats that are infected by P. destructans rewarm more frequently than normal. These unscheduled bursts of metabolic heat production prematurely burn up the body fat of overwintering bats. Hence, despite the damage caused by white-nose syndrome to the bat’s skin tissue, they apparently die due to starvation or dehydration. 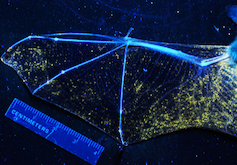 Hibernation is key to predicting the susceptibility of bat populations to mortality from white-nose syndrome: those with less energy to spare over winter are more at risk. Consequently, white-nose syndrome has fuelled a large research program on the winter ecology and hibernation physiology of North American bats.

Bats in south-eastern Australia do enter a period of winter hibernation, but that is about the extent of what we know. This knowledge gap makes it impossible to predict how they will respond if exposed to P. destructans. Even non-lethal impacts, however, will worsen the extinction-bound trajectory of several cave-roosting species, most notably the eastern and southern bent-winged bats.

What can Australia do?

Given the impending arrival of P. destructans in Australia, and our study’s findings of widespread thermal cave suitability in south-eastern Australia, we urge immediate action. This includes tightening biosecurity measures and gaining missing information on bat biology so we are better prepared for a possible white-nose syndrome epidemic.

The importance of this threat has not been missed by Wildlife Health Australia, which has produced guidelines for reporting and response to incursion. Advice is also available from the Commonwealth. Just recently, white-nose syndrome was listed in the national priority list for exotic environmental pests and diseases, ranking in the top five of native animal diseases and their pathogens.

Cave enthusiasts have also been proactive in alerting members to white-nose syndrome and the risk of accidentally introducing P. destructans, especially when returning from overseas caving adventures. And the Australasian Bat Society – a strong advocate for bat conservation – has alerted the public and government agencies to this potential new threat.

At present, there is little that would prevent P. destructans from making it its way to Australian caves, despite two years passing since experts assessed the risk of incursion as almost certain.

We need effective measures at all levels, from requiring incoming visitors to identify contact with cave environments, to decontamination procedures at caves popular with international tourists. 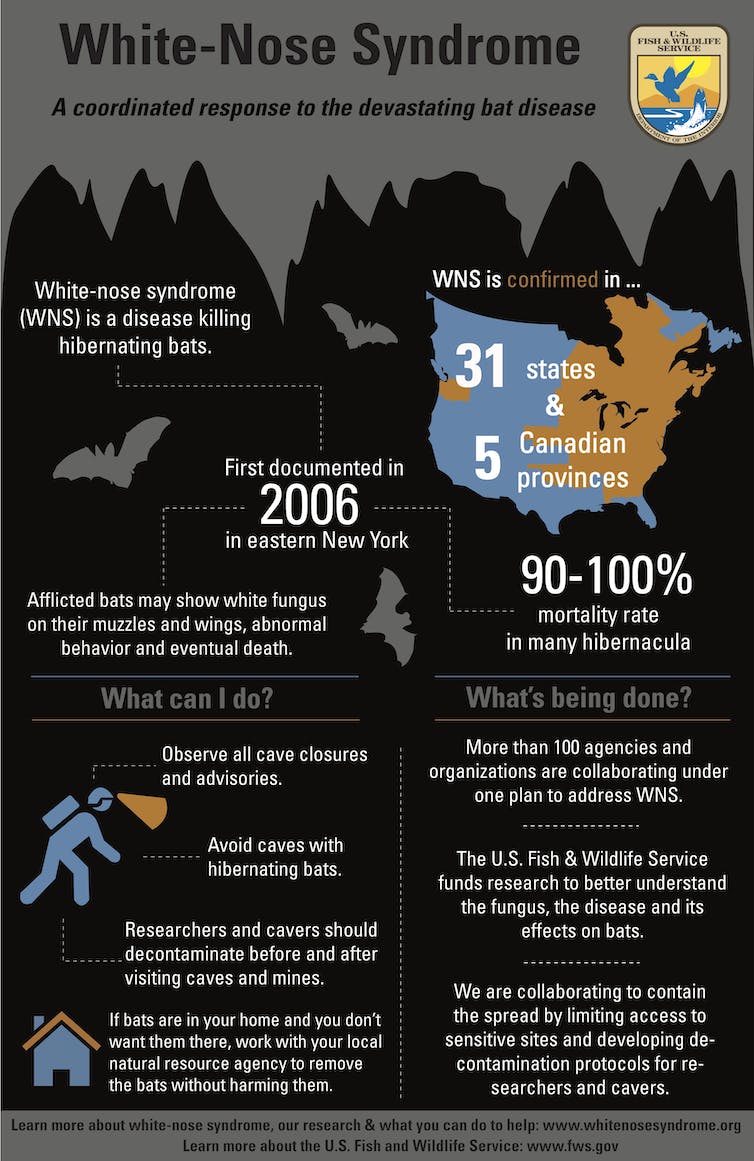 The US Fish and Wildlife Service’s White-nose Syndrome Response Team produced this infographic, including what you can do to help bats.

Predicting the impact of white-nose syndrome on Australian bats is currently not possible because we know so little about their winter biology. We urge the Australian government to fund specific research to gain this information.

The US Fish and Wildlife Service has injected more than US$46 million since 2008 into research and fieldwork to address the threat. Australian researchers can use this work to focus on the critical data needed to inform models that predict the vulnerability of local bat populations.

Why we need bats to survive

Bats are incredibly valuable in their own right. But the world needs healthy bat populations: a single insectivorous bat can eat up to half its body mass in insects each night, and together colonies of bats provide a service with an estimated value to the agricultural industry alone in the billions of dollars per year.

We hope this terrible disease will not threaten Australian bats. But the precautionary principle dictates we should plan and act now, assuming the worst-case scenario. Alarm bells are ringing.

Read more: The importance of Australia’s weird and wonderful bats 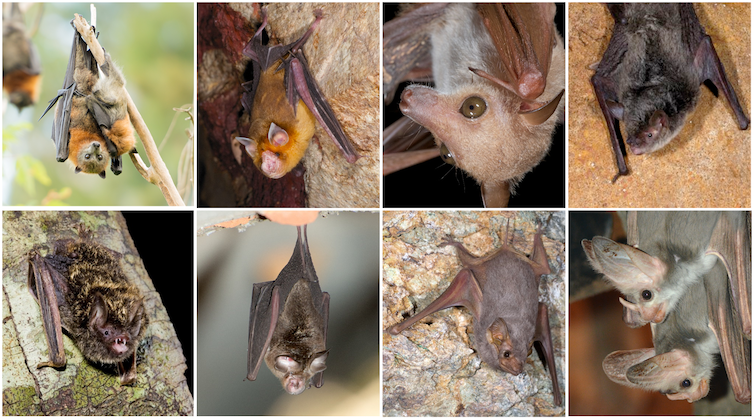