More than one billion mammals, birds, and reptiles across eastern Australia are estimated to have been affected by the current fire catastrophe.

Many animals and plants have been incinerated or suffocated by smoke and ash. Others may have escaped the blaze only to die of exhaustion or starvation, or be picked off by predators.

But even these huge losses of individual animals and plants do not reveal the full scale of impact that the recent fires have had on biodiversity. Plants, invertebrates, freshwater fish, and frogs have also been affected, and the impact of the fires is likely to be disproportionately greater for threatened species. Read more: A season in hell: bushfires push at least 20 threatened species closer to extinction To delve deeper into the conservation impact, we used publicly available satellite imagery to look at the burnt areas (up to January 7, 2020) and see how they overlapped with the approximate distributions of all the threatened animals and plants listed under the Environment Protection and Biodiversity Conservation Act. We restricted our analysis to the mediterranean and temperate zone of south-east and south-west Australia. The bad news We found that 99% of the area burned in the current fires contains potential habitat for at least one nationally listed threatened species. We conservatively estimate that six million hectares of threatened species habitat has been burned. 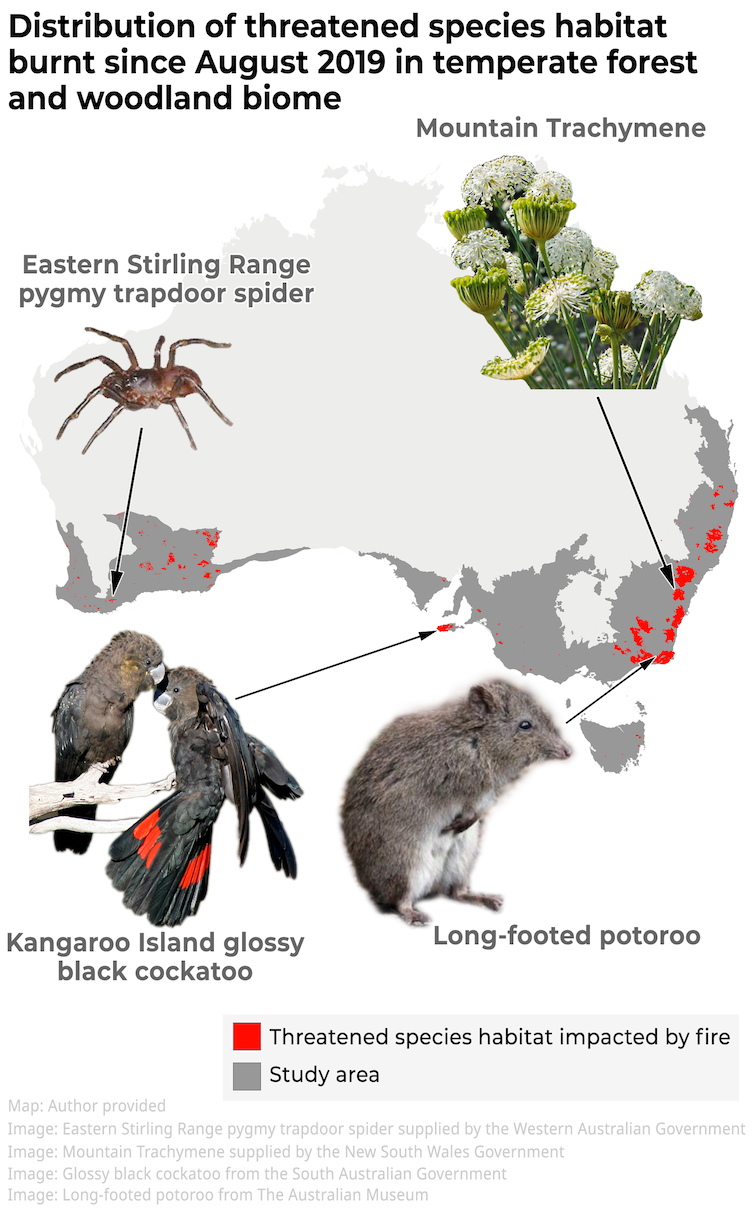 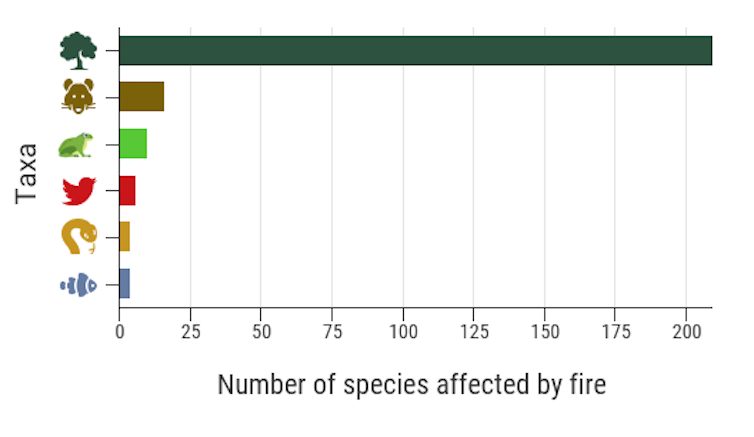 Author supplied Twenty-nine of the 30 species that have had more than 80% of their range burnt are plants. Several species have had their entire range consumed by the fires, such as the Mountain Trachymene, a fire-sensitive plant found in only four locations in the South Eastern Highlands of NSW. Other species that have been severely impacted include the Kangaroo Island dunnart and the Kangaroo Island glossy black cockatoo. These species’ entire populations numbered only in the hundreds prior to these bushfires that have burned more than 50% of their habitat. 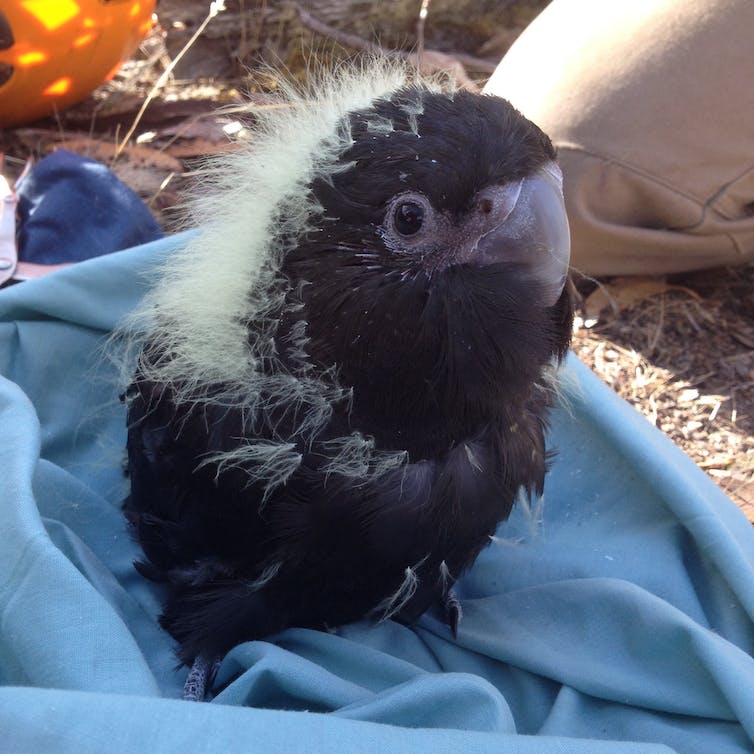 The Kangaroo Island glossy black cockatoo has had more than 50% its habitat impacted by fire. Mike Barth Glossy black cockatoos have a highly specialised diet. They eat the seeds of the drooping sheoak (Allocasuarina verticillata). These trees may take anywhere from 10 to 50 years to recover enough to produce sufficient food for the black cockatoos. The populations of many species will need careful management and protection to give their habitats enough time to recover and re-supply critical resources. The figures above do not account for cumulative impacts of previous fires. For example, the critically endangered western ground parrot had around 6,000 hectares of potential habitat burnt in these fires, which exacerbates the impact of earlier extensive fires in 2015 and early 2019. Threatened species vary in their ability to cope with fire. For fire-sensitive species, almost every individual dies or is displaced. The long-term consequences are likely to be dire, particularly if vegetation composition is irrevocably changed by severe fire or the area is subject to repeat fires. More than 50% of the habitat of several species known to be susceptible to fire has been burnt – these include the long-footed potoroo and Littlejohn’s tree frog. 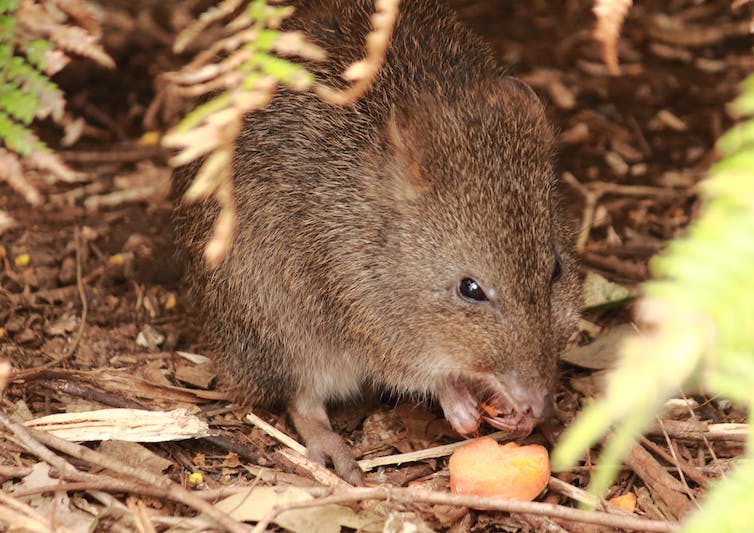 The endangered long-footed potoroo has had more than 50% of its potential habitat impacted by fire. George Bayliss Some species are likely to thrive after fire. Indeed, of the top 30 most impacted species on our list, almost 20% will likely flourish due to low competition in their burnt environments – these are all re-sprouting plants. Others will do well if they are not burnt again before they can set seed. Rising from the ashes For fire-sensitive threatened species, these fires could have substantially increased the probability of extinction by virtue of direct mortality in the fires or reducing the amount of suitable habitat. However, after the embers settle, with enough investment and conservation actions, guided by evidence-based science, it may be possible to help threatened species recover. 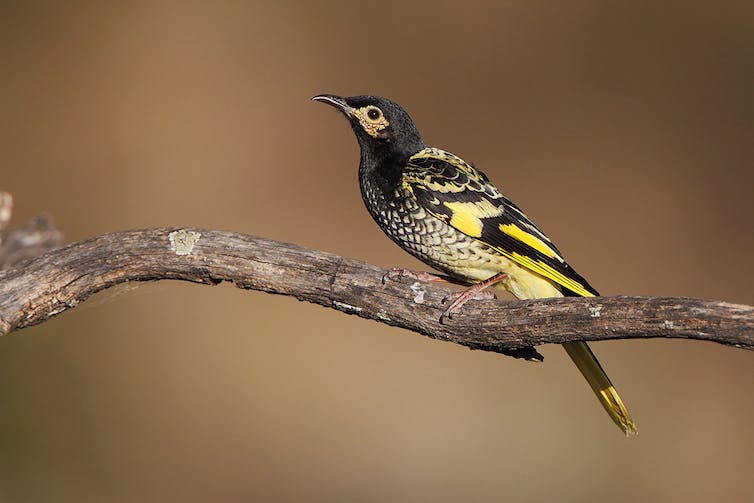 For species on the brink of extinction, insurance populations need to be established. Captive breeding and release can complement wild populations, as occurs for the regent honeyeater. Dean Ingwersen / BirdLife Australia Protection and conservation-focussed management of areas that have not burned will be the single most important action if threatened species are to have any chance of persistence and eventual recovery. Management of threatening processes (such as weeds, feral predators, introduced herbivores, and habitat loss through logging or thinning) must occur not just at key sites, but across the landscapes they sit in. Maintaining only small pockets of habitat in a landscape of destruction will lock many species on the pathway to extinction. In some cases, rigorous post-fire restoration will be necessary to allow species to re-colonise burnt areas. This may include intensive weed control and assisted regeneration of threatened flora and specific food sources for fauna, installing nest boxes and artificial cover, or even targeted supplementary feeding. Unconventional recovery actions will be needed because this unique situation calls for outside-the-box thinking. Read more: The science of drought is complex but the message on climate change is clear Playing the long game These fires were made larger and more severe by record hot, dry conditions. Global temperatures have so far risen by approximately 1°C from pre-industrial levels. Current projections indicate that we are on track for a 3°C increase. What will that look like? We are in a moment of collective grief for what has been lost. A species lost is not just a word on a page, but an entire world of unique traits, behaviours, connections to other living things, and beauty. These losses do not need to be in vain. We have an opportunity to transform our collective grief into collective action. Australians are now personally experiencing climate impacts in an unprecedented way. We must use this moment to galvanise our leaders to act on climate change, here in Australia and on the world stage. The futures of our beloved plants and animals, and our own, depend on it.