Bushfires this season have left an estimated 1 billion dead animals in their wake, their carcasses dotting the blackened landscape.

Adding to the toll, farmers are being forced to euthanise injured and starving livestock and there are also calls to cull feral animals in fire-affected areas, including by aerial shooting.

The carcasses have already been flagged as a potential biosecurity threat, and the Australian Defence Force is tasked with collecting and burying the dead in mass graves.

Read more: Australia's bushfires could drive more than 700 animal species to extinction. Check the numbers for yourself

There’s logic in this. Carcasses can harbour nasty diseases such as botulism that threaten human, livestock and wildlife health. They also provide food for invasive pests like feral cats and red foxes.

But carcasses can play a positive role as landscapes recover from fire, providing rich nutrients for other native animal, microbial and plant species. 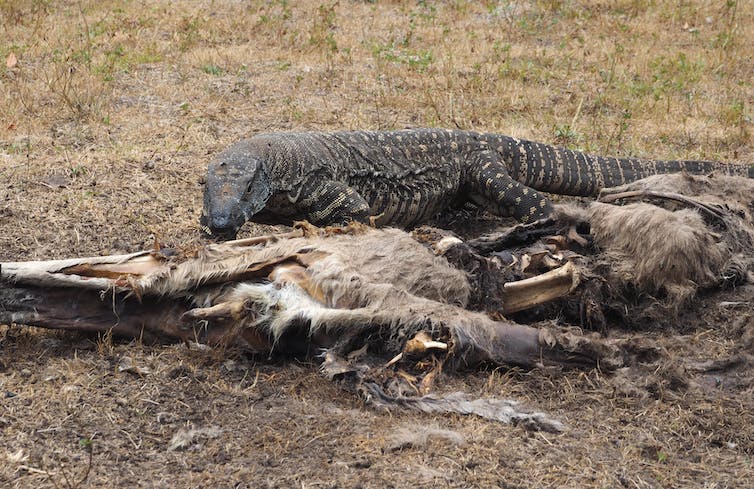 Carcasses provide important food sources to native animals, such as the lace goanna.

The Morrison Government has announced a A$50 million package to help wildlife and habitat recover from the fires, and yesterday met leading wildlife experts and environment groups to get advice on the recovery process.

We suggest this process should examine carcass disposal methods other than burial, such as composting – effectively “recycling” the dead. It should also involve monitoring the carcasses that remain to understand both their positive and negative roles in fire-ravaged areas.

The positives: carcasses feed the living

Carcasses feed a range of native animals, including goannas, wedge-tailed eagles and dingoes. Post-fire, they can provide an alternative source of food for struggling native predators and pollinators. And feeding hungry predators with carcasses could redirect them away from vulnerable prey.

Carcasses also feed insects such as flies, ants, beetles, and their larvae, and support important ecological processes such as pollination.

As they decompose, nutrients leach from carcasses into the surrounding environment and create “halos” of greenery in the landscape, where vegetation thrives around carcass sites. Their influence on soil and plant communities can last for years. 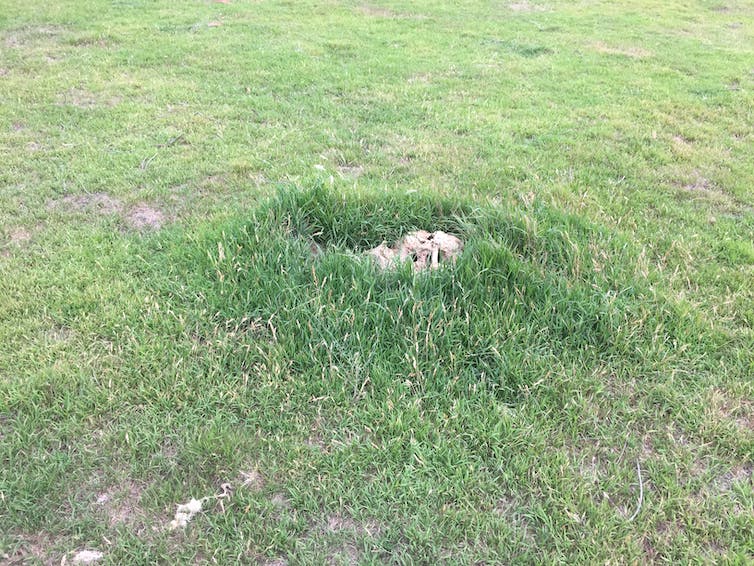 Vegetation growth ‘halo’ around a kangaroo carcass. When animals die their nutrients can influence the landscape for years.

Carcasses are home to bacteria that help break down animal tissues. But some carcasses also harbour harmful pathogens that bring disease.

For a disease outbreak to happen, the animal must generally have already been carrying dangerous infectious agents, like Anthrax or the Hendra virus, before they died. And many of these pathogens will not survive long on dead hosts.

Read more: Predators get the advantage when bushfires destroy vegetation

Leaving carcasses out in the open can also feed introduced predators such as feral cats and red foxes, putting small native animals at risk. Some weeds thrive in the nutrient-rich soils around carcasses too.

How long does a carcass stick around?

We know very little about the ecological role of carcasses in fire-affected areas, and it’s important that more research is carried out.

We know burnt animals can decompose faster than other carcasses and harbour different types of insect scavengers.

However the recent fires are likely to have wiped out entire scavenger communities, including larger scavengers like dingoes and eagles, that help to clean our landscapes of dead animals.

The effects of this are unknown, but could mean that carcasses stick around in the environment for prolonged periods, even months. 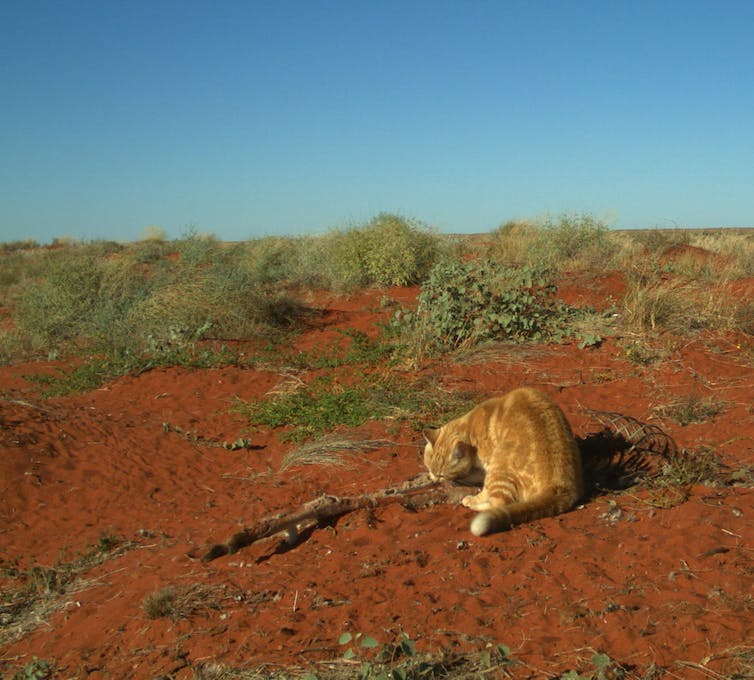 A feral cat scavenging on an animal carcass. Animal carcasses could increase the number of feral predators.

Finding the right solution to a grisly problem

As climate change accelerates the number of natural disasters and mass animal deaths, more thought and planning must be put into carcass management.

In Australia, carcasses are often dealt with by not dealing with them: they’re left to rot. This happened for almost 100 feral horses that died last year at an empty water hole during a heatwave.

Animals culled in national parks and on farmlands are also often left to decay, untouched, as are the many dead animals that commonly line our country roads. But in landscapes where feral species are common, or where livestock or people are likely to encounter carcasses, leaving them alone isn’t the best option.

Carcasses are more often buried following disease outbreaks or when livestock die. We saw this during the 2019 Queensland floods, where thousands of drowned cattle were buried in mass graves.

Burial is a relatively inexpensive, fast and effective method of dealing with the dead. But it must be done carefully to avoid polluting groundwater sources and causing nutrients like nitrogen to build up.

Burying carcasses can also be compared to sending rubbish to the tip. Breakdown will be slow, and no useful end product is created.

An alternative option is to “recycle” carcasses by composting them. Composting can accelerate the decomposition of animal tissues and is environmentally friendly, capturing nutrients.

Composting kills most pathogens, whereas burial just moves the problem underground. It also suppresses smelly odours and doesn’t attract scavengers. The usable organic material resulting from the composting can also be applied to nutrient-poor soil. 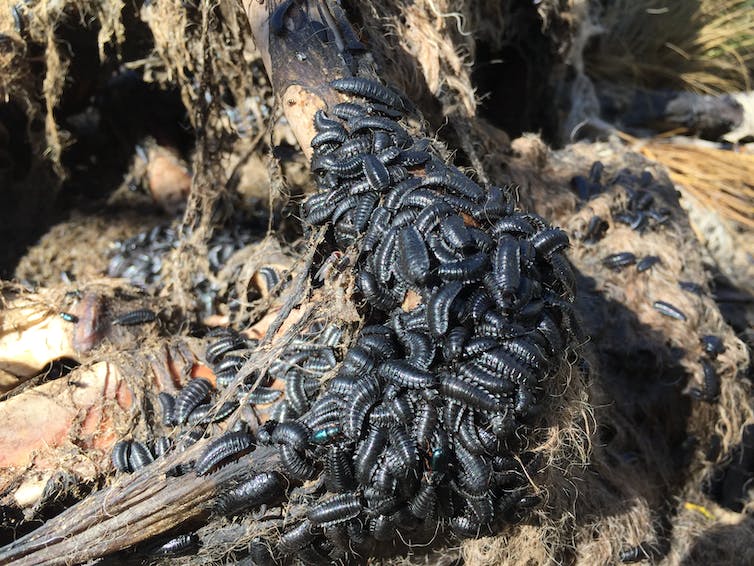 Getting used to the ‘yuck’ factor of carcasses.

Composting can be time-consuming and hard to get right. It requires careful monitoring of temperature and moisture content to ensure all disease-causing pathogens are killed, and odours are suppressed.

There’s also a “yuck” factor and the public would probably need convincing for the method to be widely adopted.

But whatever option we choose, it’s clear there’s more we can do with carcasses than simply burying them.