The devastation of the Australian bushfires has generated an outpouring of generosity amongst Australians.

We have been giving directly to charities such as the Red Cross, the Salvation Army and others working on the ground to support survivors. Many of us have contributed to appeals such as Celeste Barber’s, which, at the time of writing, has raised A$42 million for the NSW Rural Fire Service. 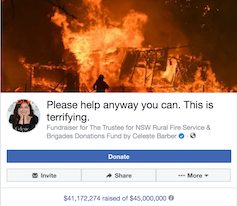 At the time of writing, celebrity Celeste Barber had raised $42 million. Facebook

Wealthy Australians, like the Packer, Gandel and Minogue families, have also made large commitments, as have many businesses.

The fact that so many of us have been reaching into our pockets during this difficult time is not surprising. Australia is the fourth most generous nation in the world, according to the most recent edition of the World Giving Index and emergency relief is a common cause to which we give.

But it’s worth thinking carefully about how to give, to ensure you’re not wasting your contribution or inadvertently making things worse. 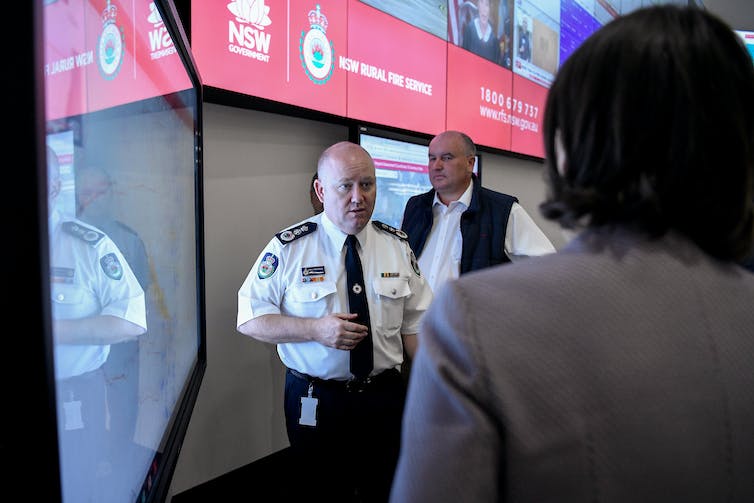 The head of the NSW Rural Fire Service, Shane Fitzsimmons, has pledged to spend the tens of millions of dollars donated to his organisation ‘where it was intended’. The Rural Fire Services is mostly funded by the NSW Government. AAP/BIANCA DE MARCHI

Watch out for scammers

One thing to be mindful of during times like these, is that unfortunately some people may seek to prey on the generosity of others. The Australian Competition and Consumer Commission has issued a warning about fundraising scams associated with the bushfires.

If you aren’t sure about an organisation that you’ve been approached by, you can always check whether they’re a registered charity using the Australian Charities and Not-for-profits Commission’s online register.

It lists all charities registered in Australia, and details their operations, finance and governance.

Money usually trumps everything else

Generally, it’s best to give money. The organisations you give it to can then decide how to use it best.

We may be tempted to give goods like blankets or clothes, but organisations often get overwhelmed by donations of goods.

The idea of donating while also clearing out unused items at home may seem tempting but many organisations don’t have the resources to sort through donations. Often, the goods donated just aren’t fit for use.

Research by the federal and South Australian governments examined this problem, saying of the 2009 Victorian bushfires:

The Victorian Bushfires resulted in the donation of in excess of 40,000 pallets of goods from across Australia that took up more than 50,000 square metres of storage space. The costs for managing these donations i.e. three central warehouses, five regional distribution points, approximately 35 paid staff, material handling equipment and transport costs to distribute the material aid, has amounted to over 8 million dollars.

In addition, volunteer numbers reached 1,500 during the first three months provided through over 40 store fronts. Resources in the fire affected areas immediately after the event were severely stretched as a result of material aid arriving without warning and without adequate resources to sort, store, handle and distribute.

The report highlighted how this is a consistent problem during disasters, leading to the development of the National Guidelines for Managing Donated Goods. These guidelines reinforce the point that donating money is the preferred way to help out during a disaster.

If specific requests are made for certain goods, however, then you can respond by donating accordingly. The charity Givit acts as a broker that facilitates the donations of goods that meet the needs of charities and those they are seeking to help.

Always make sure that what you donate is of reasonable quality. It’s important not to use donation appeals an excuse to clean out items that probably should go in the rubbish or recycling bin.

Donations after the bushfires are also important

We’re facing a long and hot summer, with the prospect of ongoing bushfires. At some stage, they will subside and with them the appeals for donations will also end.

But it’s important to remember that even once the immediate crisis has passed, rebuilding after a disaster takes a long time and requires considerable resources.

Governments play an important part but there is also a role for philanthropy both large and small. For example, the Foundation for Rural and Regional Renewal has a Disaster Resilience and Recovery Fund which makes grants to local not-for-profit groups for community-led projects that address the most pressing needs that emerge 12-18 months after a disaster. 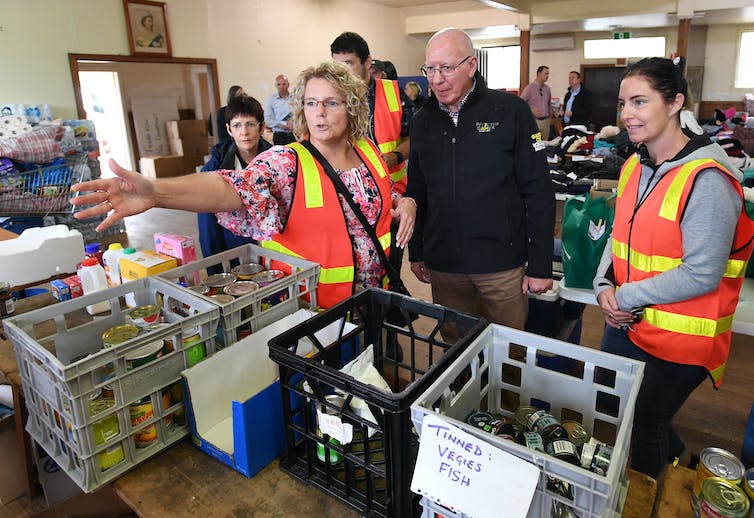 A relief centre in Bairnsdale, East Gippsland, Victoria. Emergency relief is a popular cause to which Australians donate but it’s important to think long term, too. AAP/JAMES ROSS

Supporting the immediate response and rebuilding efforts is vital, but it’s also important to consider how as a nation we collectively address the factors which are increasing bushfire risk.

Climate change is increasing the risk that we will see more frequent and intense bushfires.

Charities provide vital support to those in need during times of crisis. But they also have an important advocacy role putting pressure on governments and businesses to change policies and practices.

Read more: Explainer: what are the limits to charities advancing political causes?

There are many environmental charities doing exactly this, to push Australia toward a more comprehensive response to climate change.

So it’s also worth thinking about how your donation can help support the policy change needed to address climate change and to mitigate the risks associated with it – including more bushfires.