Australia is in the midst of inconceivably bad bushfires. The death toll is rising, thousands of buildings have been destroyed and whole communities displaced. This scale is like nothing before, and our national response must be like nothing that has come before.

Prime Minister Scott Morrison on Sunday somewhat acknowledged the need for unprecedented action. He took the extraordinary step of calling up 3,000 Australian Defence Force reservists and mobilising navy ships and military bases to aid the emergency response. This has never before happened in Australia at this scale.

Read more: Disaster recovery from Australia's fires will be a marathon, not a sprint

But it’s not enough. As this horrific summer of disaster continues to unfold in coming weeks, we clearly need to overhaul our emergency management plan with a workforce that’s large, nationally mobile, fully funded, and paid – rather than using under-resourced volunteers.

The United Nations Office for Disaster Risk Reduction says weather and climate related disasters have more than doubled over the last 40 years.

Although expensive, the cost of not acting on disaster risk, planning and preparation will be greatly outstripped by the cost of future climate and weather catastrophes.

The states and territories are primarily responsible for disaster preparedness and response. Typically, the federal government has no direct responsibility, but lends a hand when asked through a variety of programs, policies and initiatives.

This may have worked in the past. But with ever larger and more complex disasters, these arrangements are no longer fit for purpose.

Our national emergency management workforce is largely made up of volunteers, who are stretched to the bone, exhausted and some say, under-resourced.

We’ve also seen how consultation and collaboration between the Commonwealth and states are not working smoothly.

NSW Rural Fire Service Commissioner Shane Fitzsimmons only learned that Defence reservists would be deployed when it was reported in the media. And it wasn’t immediately clear how new reservists would be integrated into existing response activities.

The decade-long ideological battle between the left and right of Australian politics has paralysed climate policy development. This cannot continue.

Well-funded disaster preparedness and response inevitably builds resilience to climate change and extreme weather events like bushfires. This is something both sides of politics agree on – in fact, it was noted in the federal government’s own recent report profiling our vulnerability to disasters and climate change. 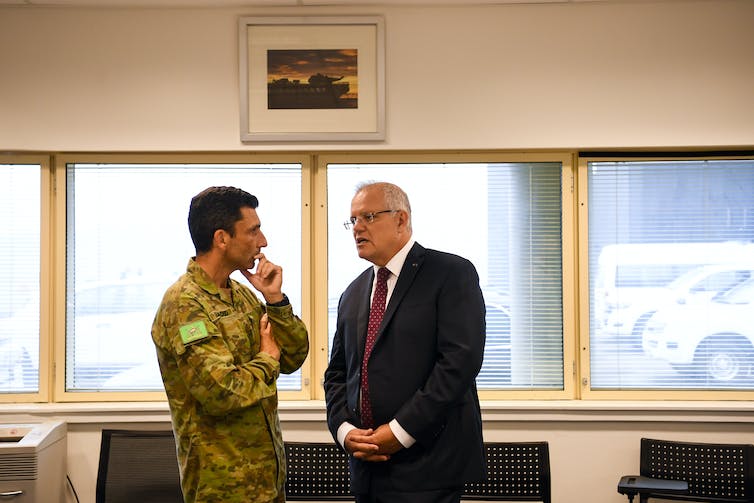 Aside from needing bipartisanship, an overhaul of Australia’s disaster management will require money. While we’re lucky to have a dedicated, paid and exceptional set of state and territory disaster and emergency management agencies such as the NSW Rural Fire Service, most heavy lifting is done by agency volunteers.

But with fire seasons starting earlier and lasting longer, we can no longer rely for months at a time on volunteers who must also work, pay their bills and feed their families.

We need a larger, paid, trained, professional emergency management workforce. I reject claims that such a workforce would stand idle most of the year. Severe weather seasons are starting earlier and lasting longer, so these professionals will be busy.

The workforce could be divided in to areas of expertise to tackle specific disaster types, and focus on different aspects of the disaster cycle such as prevention and preparation. These continue year-round.

Alternatively, volunteers could be compensated through direct payments for lost income, tax offsets for volunteers and their employers, or rent or mortgage assistance.

Read more: The bushfires are horrendous, but expect cyclones, floods and heatwaves too

These might include contributing to land-use zoning plans, building design and standards for construction in at-risk areas, or building partnerships with the private sector.

All this will cost money. Australia must accept that taxpayers will pay for future disaster preparedness, response and recovery. We need a bucket of cash for when disasters strike. Scott Morrison yesterday announced A$2 billion for recovery, but disaster funds should be ongoing.

This would be no different to the national Medical Future Research Fund – a A$20 billion fund to focus on solving nationally important medical issues funded through savings from the health budget.

There are several ways the money could be gathered. Commonwealth, state and territory governments could rethink their insistence on achieving budget surpluses, and instead spend money on a disaster fund. A “disaster levy” could be applied to household rates bills, a tax on carbon introduced, or planned tax cuts for middle and high income earners abandoned.

The public could also contribute to the fund directly. The ABC’s recent Australia Talks survey found on average, Australians would be willing to chip in A$200 each per year to pay for adaptation to climate change. If every Australian contributed, there’s another A$5 billion per year for the fund.

Read more: 'I can still picture the faces': Black Saturday firefighters want you to listen to them, not call them 'heroes'

Future disaster management will require Australia to step up. It means making hard choices about what we want the future to be like, how we’ll pay for that, and what level of risk we are prepared to tolerate. It also means demanding that our leaders deliver meaningful climate change adaptation, including disaster planning.