As I write these lines, bushfires rage through the ancient forests of New South Wales and our cities are choked with smoke. The severity of these fires is fuelled by drought.

For this reason, the new exhibition Water at Brisbane’s Gallery of Modern Art is a timely and necessary contribution to an important question in art: how to best give visual representation to climate change - something that until very recently has been an abstraction for most people?

It is impossible to separate Water from the politics of climate change. The relationship, however, between art, politics and our cultural institutions can be uneasy bedfellows. This exhibition asks important questions. What is the role of the institution? To care for our shared cultural heritage? To educate? To agitate for change?

Water does all of these things. As debates rage as to Australia’s readiness and commitment to transition to a low carbon economy, perhaps this is where the exhibition is most prescient: it sidesteps the politics and instead presents a nuanced and gentle provocation. 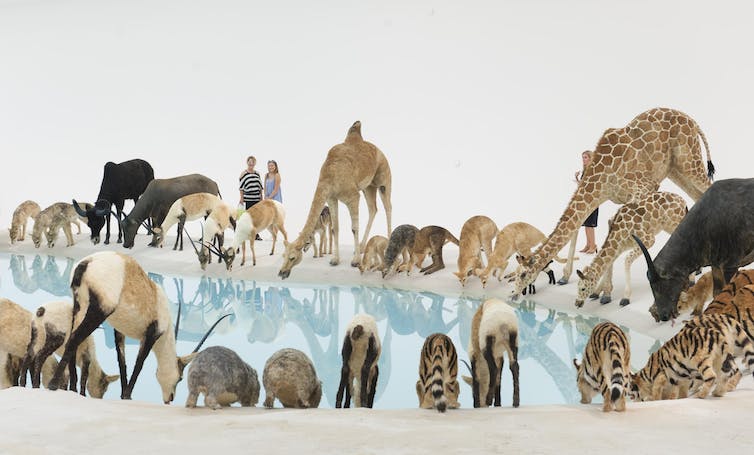 With almost 100 works by international and Australian artists, Water spans the entire ground floor of GOMA. Organised into five themes, “A rising tide”, “Deep”, “Pulse”, “Cycles” and “Held”, the exhibition is fluid and dynamic, much like water itself.

Entering, visitors are greeted by Quandamooka artist Megan Cope’s RE FORMATION (2019), a recreation of a midden consisting of cast-concrete oyster shells and copper slag, a byproduct of the mining industry.

Before colonisation, the coastal shellfish reefs provided a major food source for local Indigenous people and performed a critical role in the health of Minjerribah or Stradbroke Island’s fragile reef ecosystem. 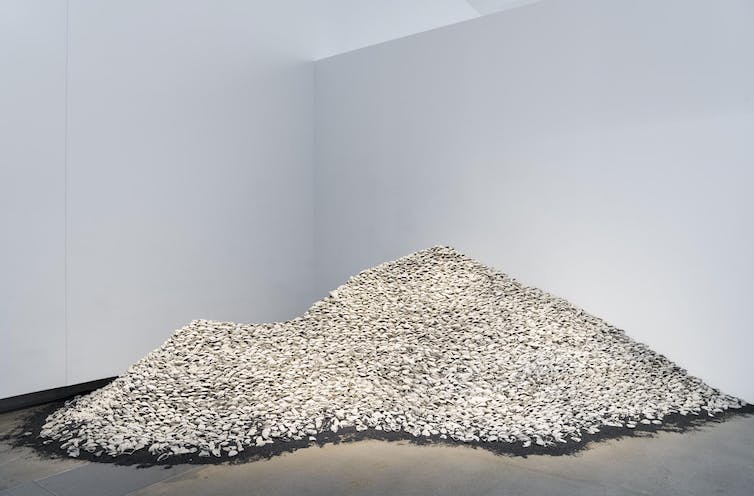 The flexibility of GOMA’s architecture is exploited to full effect with Danish-Icelandic artist Olafur Eliasson’s Riverbed (2014). The gallery space has been radically transformed to become a monochromatic, craggy landscape that gently slopes upwards. Winding its way down through the space is a bubbling creek.

The experience is thoroughly performative as visitors are encouraged to physically negotiate the landscape, to pick a line through the scree. In this way, they are transformed from passive spectators to active walkers.

Eliasson’s intentions are firmly political. He believes that greater awareness can be achieved through participation. By creating shared spaces, new modes of knowing can be developed, a way of reframing and transforming our future.

This question of transformation recurs through the exhibition. Rather than anxiety-inducing nihilism, Water is playful, optimistic and forward-looking.

William Forsythe’s The Fact of Matter (2009) occupies GOMA’s central atrium, inviting visitors to take up the challenge of navigating through the grid-like structure. The work is a metaphor for how we are collectively capable of responding and adapting to the challenges that lie ahead. 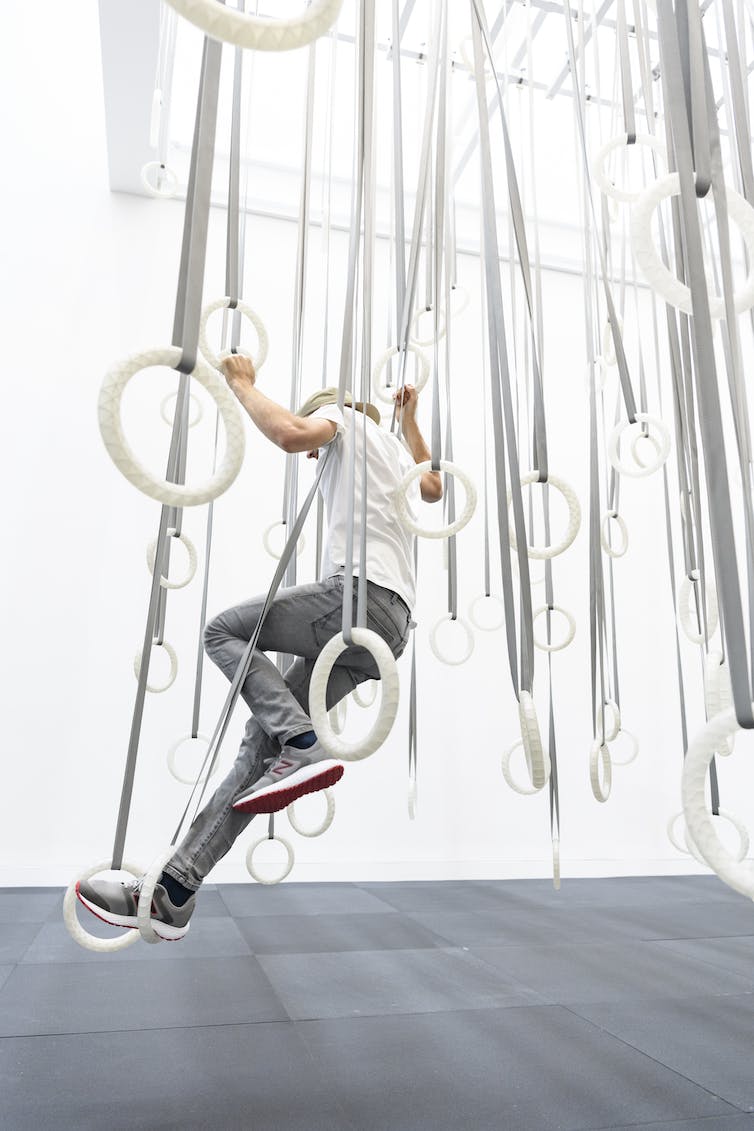 The exhibition encourages us to think differently about water and to reconsider its strangeness. 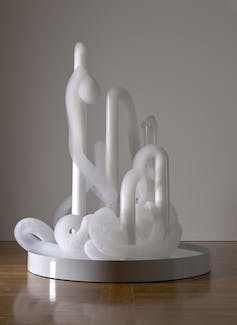 David Medalla’s Cloud Canyons No. 25 (1963/2015) reminds us how mutable water can be, as it somehow straddles the boundary between solid and liquid. This work is quietly in constant motion as it hands itself over to chance and gravity, breaking the rules as to how liquids are supposed to behave.

Other works such as the video Holding On (2015) by Samoan-born Angela Tiatia have grown in urgency as the peoples of the South Pacific are already feeling the impacts of rising sea levels.

Tiatia’s performance was filmed on the main atoll of the tiny, low-lying island nation of Tuvulu. Tiatia lies motionless on a cement plinth, as the waves from the rising tide slowly and menacingly roll over her. 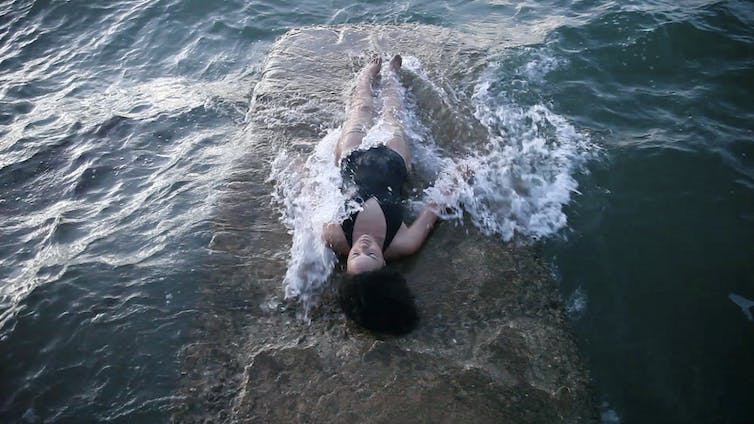 Other strategies exploit the emotive and humorous possibilities of speculative fiction. Michael Candy’s video work Little Sunfish (2019) takes its departure point from the 2011 Tohoku earthquake and the ongoing leaking of radioactive material from the Fukushima Nuclear Power Plant. 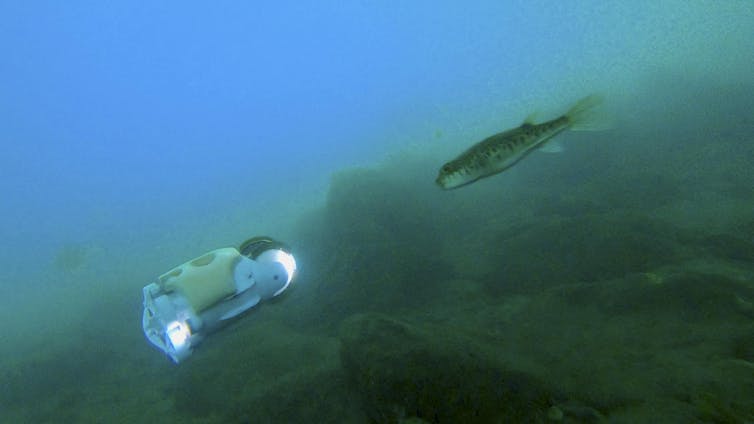 A small robot was designed to investigate the damage and named “Little Sunfish”. As it becomes increasingly anthropomorphised, the robot, in Candy’s hands, is playful and quirky, albeit leaving a trail of radioactive waste in its wake.

In one extraordinary sequence, Little Sunfish befriends a curious cuttlefish and the distinctions between animal and robot begin to disintegrate.

This exhibition is a subtly crafted plea for water. Water can give and water can take. Without it, however, we are nothing.