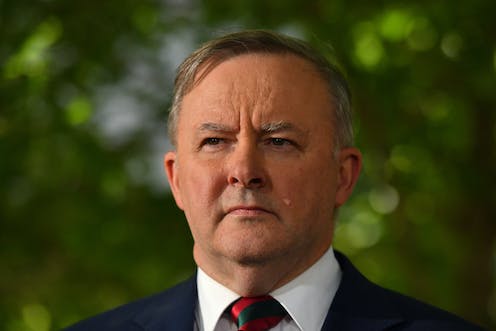 Anthony Albanese has also criticised the government for attacking freedom of the press and the right to protest.AAP/Mick Tsikas

Albanese recounts his own recent experience to highlight Facebook’s intransigence, saying when he complained about an image altered from his page “they shrugged”, saying “it wasn’t a breach of community guidelines”.

The speech, Albanese’s third “vision statement”, was released ahead of its Saturday delivery.

Condemning online platforms for being unwilling to filter out false information, he rejects the arguments they use.

"Facebook usually won’t do anything at all. That happened to me just last week, when self-described men’s rights activist Leith Erikson doctored a social media image from my Facebook page.

"What was originally a graphic supporting Australians’ right to protest became a graphic pushing Mr Erikson’s loopy campaign against the Family Court”.

But Facebook was dismissive when the matter was raised.

“This is a far-right candidate, creating a fake graphic fraudulently purporting to be from a progressive party, and Facebook sees no issue. Well, I do.

"And it begs the question: if this doesn’t breach community standards, then what does?

"What then happens when platforms become so complacent with misinformation that they become unable to filter it out?”

In his address Albanese declares war on the culture wars, calls for more constructive national conversations about the big issues such as climate change, and urges a toning down of the anger and outrage in public debate.

“This increased volume of anger and misinformation is robbing our political debates of civility and making the public’s poor opinion of our political system much, much worse.

"It’s something we can’t afford. Surveys are finding that fewer and fewer people are satisfied with the way our democracy works and that some are losing faith in democracy altogether.

"The University of Canberra has found that satisfaction with our democracy has more than halved in the last decade, down from 86% to 41%.”

Albanese criticises the government for attacking freedom of the press and the right to protest, calling for changes to protect press freedom to be enshrined “in a bipartisan way”.

He also says there should be a requirement for a parliamentary debate when Australia is committing to participate in a war, although he does not argue parliamentary approval should be required.

“I understand there are those who passionately believe that a parliamentary vote should precede the deployment of our troops in conflict overseas. I also understand there is a long tradition of the executive making these decisions alone.

"Our parliamentarians should, at the very least, be given the chance to express their view following a cabinet decision to go to war”.

He points to the two days of parliamentary debate the Hawke government allowed after its cabinet decided to join the first Gulf War.

“At their best these debates in parliament are an exercise in transparency and accountability. And this is a practice that should continue.

"Many democratic nations have parliamentary debate and transparency around their deployments. Including in the United Kingdom, where there is now a higher parliamentary threshold for decisions to go to war.

"And after all, our greatest ally, the United States, has a war powers act.

"We can’t ask people to put their lives on the line if we as legislators are too afraid to put our arguments on the line”.

Canvassing reforms to parliament, he suggests an independent speaker and a parliamentary integrity commissioner “to align the conduct of our parliamentarians with community expectations.”

On indigenous recognition, Albanese reasserts Labor’s view that the indigenous voice to parliament should be enshrined in the constitution, a position rejected by Scott Morrison.

“The government has ruled out constitutional enshrinement from the beginning – and deliberately misrepresented the concept to turn Australians against each other. That’s incredibly disappointing.

"But the best way to proceed, as in most circumstances, is to

keep talking, keep working, keep progressing. That’s what we intend to do until a voice that can heal and unify is finally achieved,” he says.

Next week Albanese will tour regional Queensland where he will visit mining and aluminium smelting enterprises, underlining the contrast between him and his predecessor Bill Shorten. In his speech he stresses that advocates of change need to understand the viewpoints of those who will feel insecure by that change. He says the anti-Adani convoy into the coal mining town of Clermont “was not helpful”.