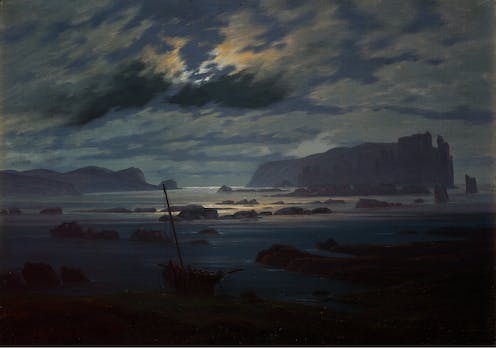 The moody landscapes of Caspar David Friedrich were inspired by Kant's ideas of the sublime.Wikimedia Commons

It was claimed Immanuel Kant’s routine was so predictable his neighbours could set their clocks by his daily walk.

Born in 1724 in the Prussian town of Königsberg (now Kaliningrad, Russia), Kant had a strict education and...

It was claimed Immanuel Kant’s routine was so predictable his neighbours could set their clocks by his daily walk.

Born in 1724 in the Prussian town of Königsberg (now Kaliningrad, Russia), Kant had a strict education and traditional Protestant upbringing. At 16, he enrolled at university to study philosophy. 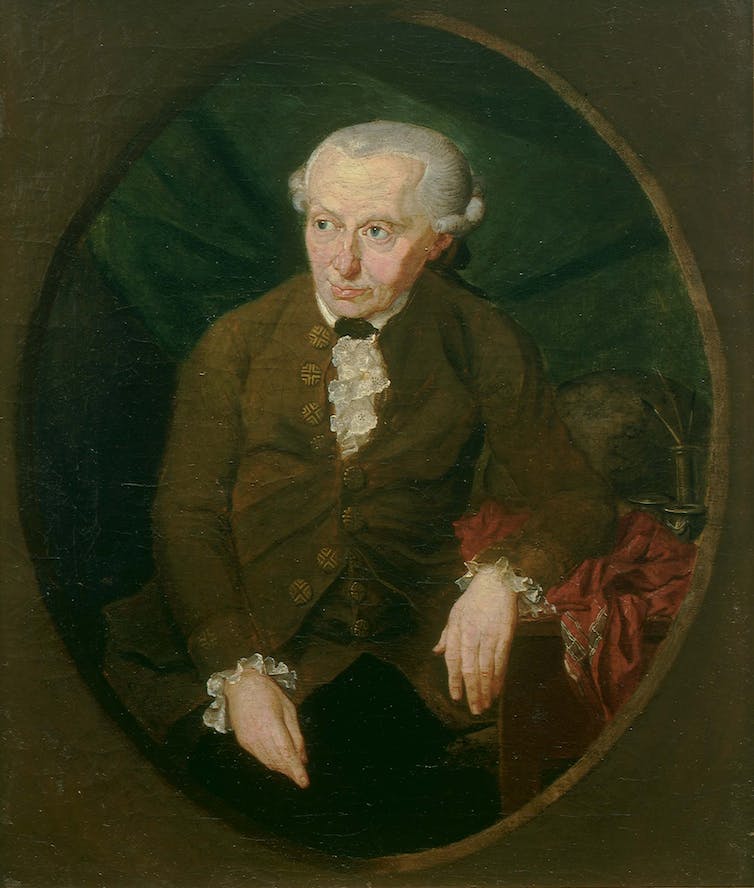 A painting of Kant by Gottlieb Doebler. Wikimedia Commons

After a time working as a tutor and lecturer, in 1770 Kant was appointed Professor of Logic and Metaphysics at the University of Königsberg. He never married, and seems never to have left his home town again after 1754.

But from this small Prussian town, his ideas spread to influence science, religion, politics and art to this day.

During Kant’s lifetime, people believed God had created us to understand the world perfectly. But the rise of modern science challenged this view.

In Critique of Pure Reason (1781), Kant argued the way the world seems is not an accurate reflection of how it really is.

He said our minds create a picture of the world based on what we perceive through our senses. “Knowledge” is not simply a representation of external reality: it is a construction.

This was a new and controversial idea. It implied that, since we cannot experience God through the senses, we cannot know that God exists – we can only have faith in his existence.

In a still largely Christian Europe, Kant was censored for these views. In 1793, the Prussian King Friedrich Wilhelm II threatened Kant with punishment if he published further on religion.

Despite censorship, questioning of God remained central to Kant’s work.

In Critique of Practical Reason (1788), Kant asked how we know what we should do. Through faith in God, he said, we have access to a moral law that tells us how to act. 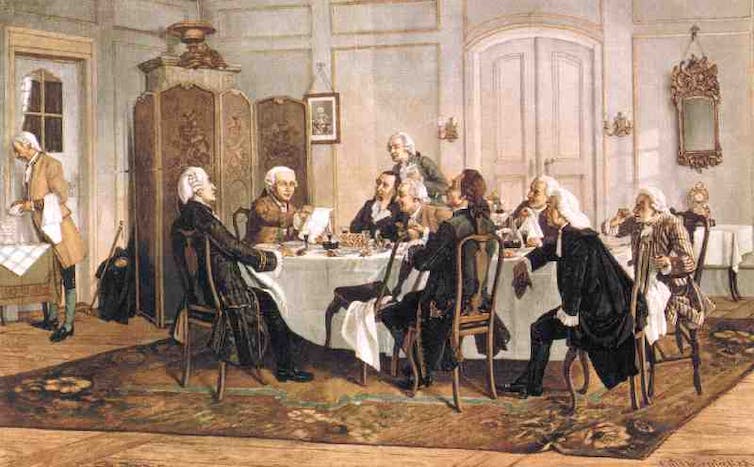 Kant and Friends at Table, by Emil Doerstling, captures the spirit of debate among Kant and his peers. Wikimedia Commons

At the centre of Kant’s ethical theory was the “categorical imperative”: we must always act in such a way that we believe would be just under a universal law.

Perhaps it is easiest to understand this as a version of the “golden rule”: do unto others as you would have them do unto you.

Kant wanted to understand the natural world, but he was also curious about how it makes us feel. In Critique of Judgement (1790), Kant wondered why people found gardens and pastoral settings beautiful, while mountains and the night sky invoked a frightened awe he called “the sublime”. 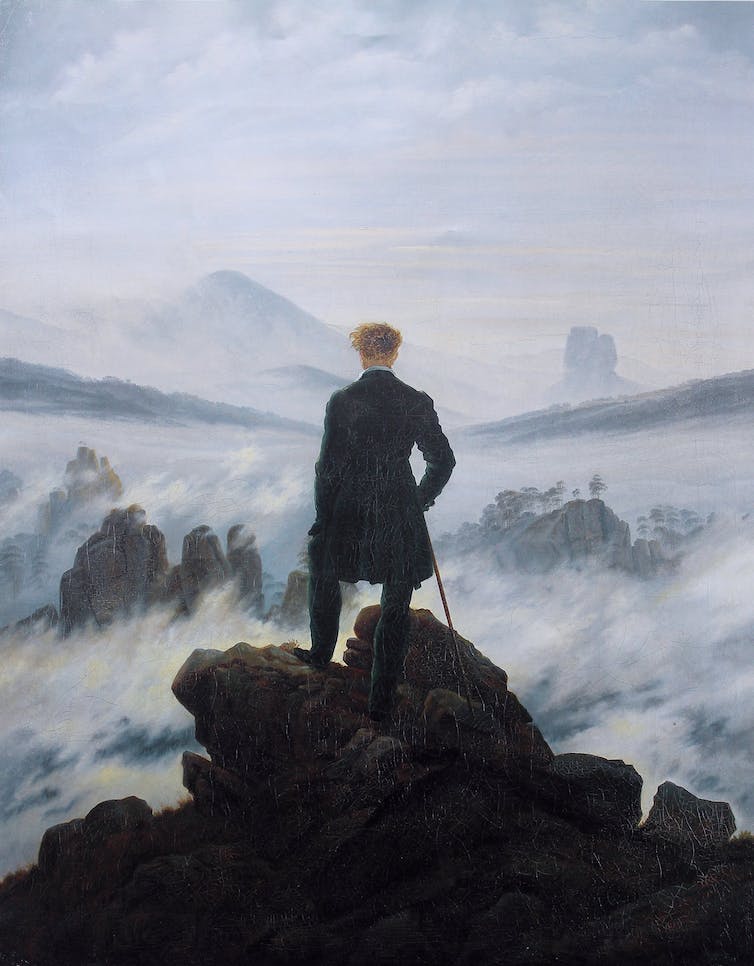 Kant believed we experience terror in the face of nature when it reminds us of our own small and fleeting place on earth. Kant’s theory of the sublime inspired a generation of artists in awe of the mysterious powers of nature.

Many of Kant’s ideas are now outdated.

Kant believed that certain differences between people are innate. In On the Different Human Races (1775), he argued there is only one human species but people of different “races” have different inborn characteristics and abilities.

These ideas helped to establish a pseudo-scientific basis for racism, which was used to justify colonial oppression and genocide.

By considering European societies as the ideal model of human development, Kant argued that not all races were capable of achieving the same level of “civilization” as European ones. This aspect of Kant’s thinking reveals how racism has historically been deeply entangled with the concept of civilization.

The age of Enlightenment

Kant was a public intellectual who wrote for a broad audience. As more people became educated and literate, a public sphere emerged in which people engaged in reasoned debate: the age of Enlightenment. 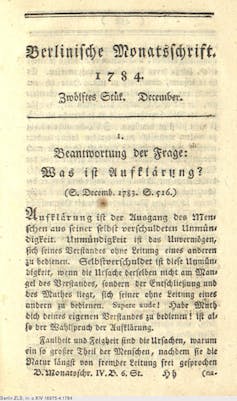 Kant’s What is Enlightenment? Wikimedia Commons

The term “Enlightenment” was first used in 18th century France, but Kant gave us the classic definition. In An Answer to the Question: What is Enlightenment? (1784), Kant wrote that Enlightenment was about people thinking freely for themselves - rather than relying on authorities.

Although Kant believed in free speech, he was not a democrat. In the Enlightenment essay, he praised the institution of monarchy, and was quick to condemn the violence of revolutions.

Kant believed that political freedom would increase through gradual historical progress rather than through revolution. In Perpetual Peace: A Philosophical Sketch (1795), he imagined a future secured by an international federation of republics.

We are far from the future of “perpetual peace” Kant imagined, but his ideas are still relevant for thinking through modern challenges.

His theory of knowledge still broadly underpins modern science. When scientists create models, they understand that these are representations – not the real thing.

Kant’s theory of the sublime can help us to understand why climate change provokes such strong feelings in us: it makes us reflect on our own transience.

His ideas about Enlightenment influence debates about education and free speech, and his concept of international federalism can be seen in the United Nations.

Many scholars and activists still appeal to Kant to understand the origins of some of our most faulty and deeply entrenched ideas about race.

Finally, in a time of tightening borders, Kant’s concepts of “world citizenship” and “universal hospitality” can provoke us to think critically about peace, migration, and international relations.