Maria Exposto, a Sydney grandmother who fell victim to a romance scam and became an unwitting drug mule, couldn’t have known what was before her when she left Australia to sign documents for her fiancé so he could retire and marry her.

At 50-years-old, Exposto had fallen for a widowed special forces soldier doing his bit for his country.

They have never met, which was easily explained – he was deployed in Afghanistan. She described being “blindly in love” with a man who wooed her online, serenading her with love songs and long, deep conversations.

Exposto recently walked free after facing a death sentence in Malaysia for attempting to smuggle a kilogram of ice five years ago. Since she was caught, she has maintained she was a victim of a romance scam.

Read more: From catfish to romance fraud, how to avoid getting caught in any online scam

Sadly, Exposto’s story is not unique. Like Exposto, victims of romance scams tend to be between 45 to 54-years-old, impulsive, respond to elaborate stories and are well-educated.

Romance scammers prey on people to build a relationship and defraud their victims. They are clever, well organised and have a number of tried techniques that make them highly successful.

The extreme emotional ties formed can make victims easy to manipulate and leave them vulnerable to knowingly or unknowingly engaging in criminal activity.

More than 10 million Australians are exposed to at least one personal fraud scam each year.

And with more than 3.5 million Australians using Tinder alone, the opportunities for romance scammers is growing rapidly. In fact, online dating fraud rose by 150% in a year from 2011, with criminals recognising the opportunities to exploit those looking for a partner.

Scammers are in for the long haul

In Exposto’s case, the “relationship” had been ongoing for more than a year. This is not surprising, as romance scammers are in for the long haul and see the process as a long term investment to establish intimacy and trust. They often use teams of people to “hook” and “woo” the victim.

Scammers typically fake profiles with stolen photographs, often mimicking army officers, and frequently create a story of tragic or desperate circumstances. Armed force identities are common, as it easily explains their inability to meet in person. 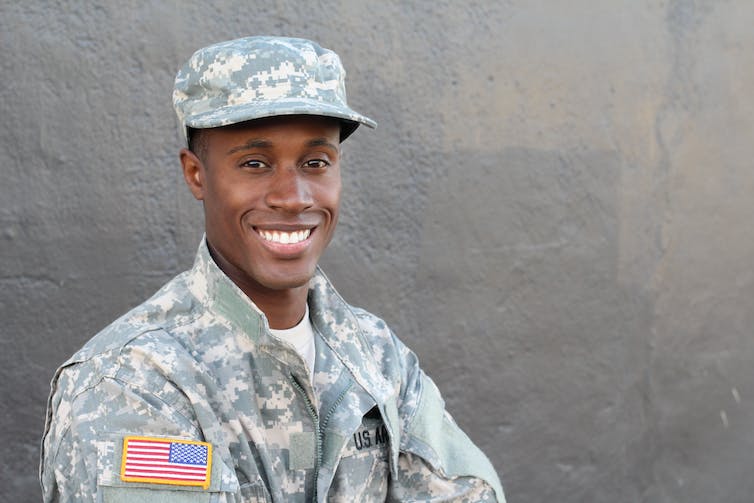 Could the handsome military officer’s picture actually come from a stock image website? It’s a good idea to reverse image search the photo of your online partner. Shutterstock

It’s this willingness of the scammer to engage in a prolonged, sustained interaction that creates the belief the relationship is “real” and leading to something more permanent.

Eventually, the scammer has ensnared a person who has heavily invested in the relationship, has a strong emotional attachment and has been groomed to believe they “know and understand” their partner.

After the bond is established, scammers frequently request money to pay fictitious medical bills, help partners out of dangerous situations or pay for tickets.

In some cases, victims can become involved in illegal activities including money laundering and bank fraud, and are at risk of being charged. These types of victims are often referred to as “money mules”.

Read more: How to get away with fraud: the successful techniques of scamming

And “mule recruitment” is when the scammer attempts to get a person to receive stolen funds and then transfer those funds to criminals overseas.

Many victims of fraud related crimes can also suffer their own financial loss, on top of facing the sudden loss of, what was to them, an important and significant intimate relationship – a “double hit”.

Victims have described the loss of the relationship as more devastating than their financial loss.

Their experience is more psychologically damaging than other types of fraud, and is often compounded by a total lack of understanding from family and friends.

Some victims remain in denial and are unable to accept the scam or separate the fake identity with a criminal. Some realise they’ve exposed themselves or performed sexual acts online, and feel humiliated and violated. They report feeling depressed, and even suicidal.

Read more: More than just money: getting caught in a romance scam could cost you your life

And victims have said they lost trust in others, severed social ties, and suffered a lower sense of self-worth and confidence.

This social withdrawal and isolation can make victims vulnerable to a second wave of the scam, believing their online partners excuses or explanations that they really are “real”.

But victims don’t often receive social support, reporting that family, friends and colleagues thought they were stupid, or were angry with them because of the financial loss, such as losing inheritance.

Many victims keep their experience a secret or don’t disclose the entire story for fear of these types of reactions.

How can you avoid being duped?

There are ways you can avoid being scammed by a one-sided romance.

Read and take heed of the instructions on dating websites. Most have clear guidelines of how to avoid online fraud, such as being suspicious about early declarations of love, requesting or receiving money.

It’s also a good idea to use their photos to do some sleuthing online, and see what information pops up when you do a reverse image search on Google. Look for any inconsistencies, see if what they’ve told you about themselves adds up.

Read more: Why we need to do more for the victims of online fraud and scams

You can also run their email address through RomanceScams.org which lists names of known scammers.

And if you become aware a friend or family member has been victimised, remember it’s a time to provide support and understanding to break the isolation, allowing the victim to grieve over the lost relationship, rebuild their self-esteem, and try again.