The student of Greek mythology is often struck by the fact that some gods and goddesses have extensive roles in the mythical narratives, and others have very limited parts to play. The goddess Demeter is an interesting case of this. As an Olympian goddess and fertility figure, she is very important in ancient Greek religion and life, but she has a rather small role in its literature and mythology.

She is mentioned a little bit in Homeric epic, especially the Iliad, but has no actual part to play either in the Iliad or the Odyssey. Nor does she feature at all as a character in extant Greek drama.

There is, however, a rather beautiful poem called the “Homeric Hymn to Demeter” in which Demeter and her daughter Persephone are the central focus of attention. It probably dates to the first half of the 6th century BC. It is 495 lines long and composed in hexameters, the same poetic metre as the Iliad and Odyssey. Despite its connections to epic poetry, however, and the title “Homeric”, the hymn is of uncertain authorship.

The focus of the poem is one of the most renowned narratives from Greek mythology - the rape of Persephone by Hades, the god of the Underworld, and the response of Demeter to her loss. It is a remarkable narrative, built fundamentally on the power of a mother’s love for her only child. 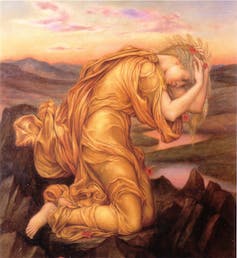 The ancient Greek word for “mother” [meter] is actually embedded in Demeter’s name. The Hymn describes the primordial maternal power brought to bear upon the male sky-god Zeus, who had secretly (ie without Demeter’s knowledge) given over his daughter Persephone to a marriage with his brother Hades.

Demeter is one of the “older” generation of Olympian gods. Her siblings are Zeus, Poseidon and Hades on the male side, and Hera and Hestia on the female side. Zeus, the sky god, has sexual relations with two of his sisters - Hera, who is a kind of long-suffering queen of heaven; and Demeter, who is more earth-focused. In a famous passage in Iliad 14, Zeus recounts to Hera herself some of his sexual exploits, and he names Demeter in his long list of amours.

Persephone is not mentioned in the passage as the product of this particular sexual encounter, but that is definitely the idea. Demeter and Persephone are often thought of together as “The Two Goddesses”. This name helps to emphasise the power of their bond, and the gravity of Zeus’s action in violently separating them.

The Hymn tells the story of Persephone and other young girls gathering flowers in a meadow. As she bends down to pick a beautiful flower, the earth opens up and Hades emerges on his horse-drawn chariot. She gives out a scream, but he carries her off into the depths of the earth.

A blight on the land

Her mother hears her cry, and begins a search for her throughout the whole world. Whilst ever Persephone is missing Demeter creates a blight on the land in which nothing germinates and nothing grows. She would have destroyed humanity altogether if Zeus hadn’t taken notice, and acted accordingly.

A human genocide is clearly not in the gods’ interest. It would deprive them of the honours that they receive from mortals. Their existence without honours from humans would be intolerable, and Zeus, as ruler of the world, can’t allow it to happen. But Demeter will not let go of her fury at the loss of her daughter. She won’t go to Olympus, the home of the gods, and she won’t let the fruit grow on earth until she sees Persephone again.

Zeus is forced to relent and sends the messenger Hermes to the Underworld to get the girl back. But, just as she is going, Hades prevails on her to eat the seed of a pomegranate to prevent her from staying with her mother above the earth all her days. Persephone is therefore forced to spend one-third of each year under the earth with Hades, and two-thirds with her mother and the community of gods on Mount Olympus.

Persephone’s transition from the feminised world of a flowery meadow to the unrelenting male world of Hades could scarcely be more fundamental.

The male gods who perpetrate the deed, Zeus and Hades, have no redeeming features whatever in the Hymn, and they are really undone by the sheer force of Demeter’s love for her daughter. The main narrative of the Hymn has some similarities to Achilles’ response to the loss of Patroclus in the Iliad, but Demeter’s wrath is universal with a kind of cosmic maternal power to it.

A new cycle of life and death

Persephone’s eating of the pomegranate seed means that a compromise is set up, in which the world changes forever. Whereas she might have expected an immortal existence with her mother on Olympus, Persephone becomes the central figure in a new cycle of life and death.

She is both queen of the Underworld, as wife of Hades, and associated with the new life that rises with the spring. Death and life are no longer mutually exclusive, but co-exist in both the upper and lower worlds. There is life in death, and death in life. 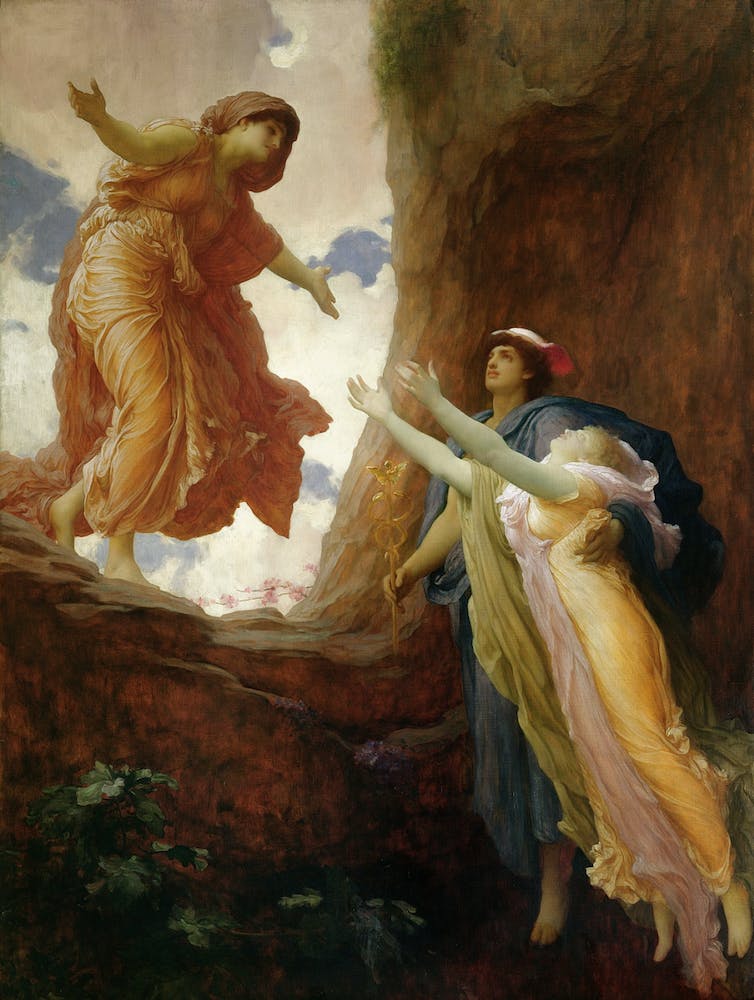 The Demeter Hymn contains the foundation myth of the Eleusinian Mysteries - renowned religious rites which took place at Eleusis, near to Athens. Initiation into the Mysteries held out the prospect of making death less threatening.

The establishment of Persephone as a feminine presence in the Underworld, as described in the Hymn, corresponds to the notion that death is not as terrifying as it could have been had Hades alone been present as ruler in the world of the dead.

Like many Greek myths the story of Persephone’s descent into the realm of Hades, and her emergence from it, has resonances in contemporary arts, most especially the notion of death and rebirth.

One parallel worth noting is the Phantom of the Opera in the version by Andrew Lloyd-Webber (et al.) in which Erik leads Christine down into the cellars of the opera house on to a boat and across a subterranean lake. 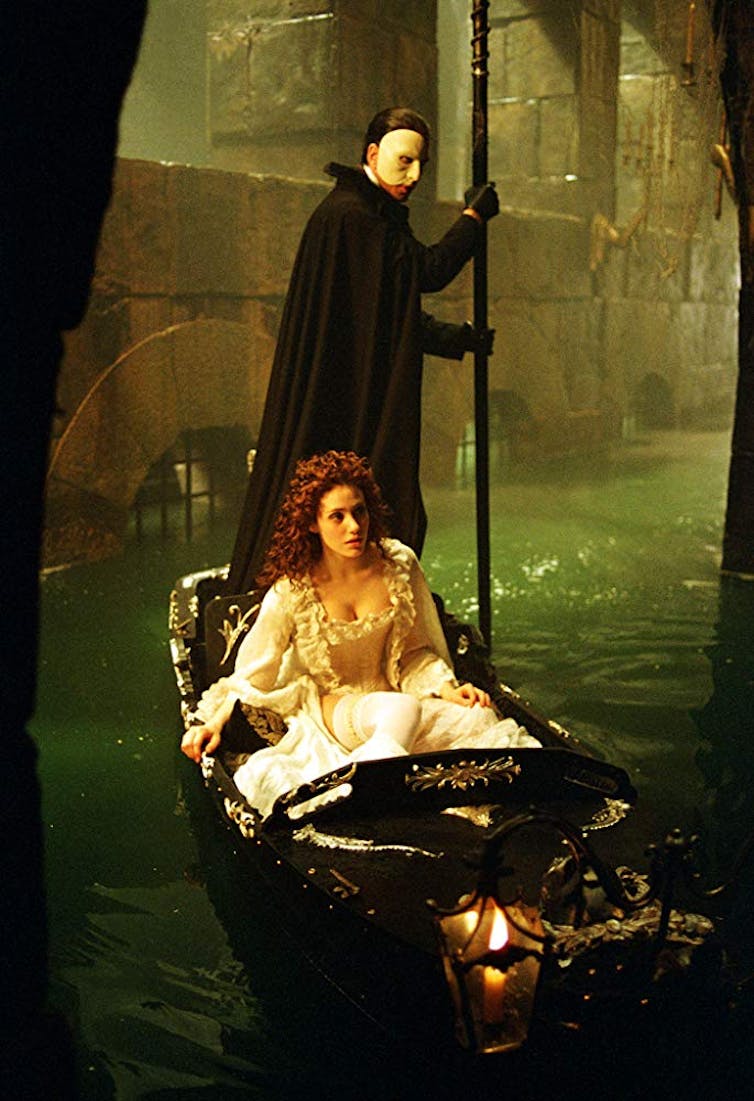 Erik then sings to Christine of the attractions of his isolated world of darkness and night:

Slowly, gently night unfurls its splendorGrasp it, sense it, tremulous and tenderTurn your face away from the garish light of dayTurn your thoughts away from cold, unfeeling lightAnd listen to the music of the night

The plea of Hades to Persephone is quite different in the Hymn, but the desperate loneliness of the two males in their dark realms is something that they have in common.

It is worth noting, finally, that phrases like being “carried off by Hades” or “marrying Hades” were used as metaphors more broadly to describe the deaths of young girls. This again shows how significant the myth of Demeter and Persephone was in the lives of women and girls in Greek antiquity.