The political influence of the far-right, along with a more salient national security agenda, has spurred a growing anti-Muslim sentiment and deep social division in Australia.

In fact, a new report from the Islamophobia Register looked at hundreds of Islamophobic incidents in 2016 and 2017. It found that while the number of incidents is steady, the attacks are becoming bolder and more physical, with the overwhelming majority directed at women.

In the face of this growing division, our new research offers hope to our multicultural society.

We looked at the experiences between Muslims and non-Muslims in Australia from the perspective of 28 young Muslim Australians. We wanted to understand how contact between these two groups shape young Muslims’ experiences of discrimination and their perceptions of integrating in Australian society.

Sadly, but unsurprisingly, all our participants said they had experienced discrimination at various times. One respondent said:

The fact that I don’t look Australian, the fact that I look brown, and no matter where I go, the first thing I’ll be asked is where I’m from because of my name and because of the way I look […] I heard things like ‘oh, you have a terrorist-sounding last name’ said to me. I’ve had comments about my skin colour.

Social psychology research on the effects of contact between cultural groups shows interaction isn’t always positive. And when there’s a negative experience, prejudice and conflict between these groups can rise.

Read more: How to tackle Islamophobia – the best strategies from around Europe

These participants, who said they see themselves as representatives of all Australian Muslims, not only want to be accepted as Muslims, but also say their identity can add value to Australian society.

Our research participants said they’re well aware not all Anglo-Australians hold negative attitudes towards them. But they also understand that certain groups of the population – mostly older in age and based in rural areas with little contact with Muslims – are more likely to have these prejudices.

It’s exactly this group many of our respondents want to engage with. They argue the negative views about Islam and Muslims are largely due to biased media coverage, or when people have never met a Muslim in person.

Some of these respondents even talked about how they seek opportunities to talk to Anglo-Australians about Islam to help break down the barriers between cultures. 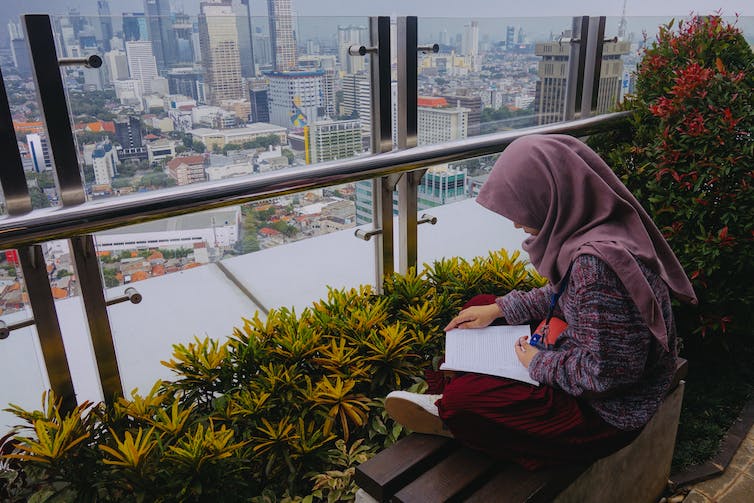 The overwhelming majority of Islamophobic attacks are directed at women. Unsplash

They’re confident in their ability to change their perceptions after having had positive experiences in the past when encounters started negative, but evolved into something positive.

Often, our respondents didn’t take biased comments they received personally, stating they “do not take negative comments to heart”, “just ignore”, “walk away” and sometimes “laugh at it”. One participant described what he did in response to a woman criticising his political activism:

I approached the lady very nicely and very gently to describe that I consider myself an Australian citizen, and it is my duty to stand up for my community. We had a very short conversation.

At the end of the conversation […] she seemed very happy, she apologised for saying what she said […] at the end it had a positive result.

This was a key finding in our research: although the majority of our respondents anticipate prejudice against them from some Anglo-Australians, they believe in the power of contact, dialogue and exchange to transform negative attitudes and prejudices.

Even when such willingness was not expressed explicitly, this “intergroup contact” was still seen to be a good thing.

Diversity has the potential to generate deeper and more sustainable social glue that binds all Australians together through a shared commitment to inclusion, respect and intercultural understanding.

The key condition for this outcome is not suspicion, exclusion and mutual rejection. Rather, as our research shows, the key condition is empathy, mutual acceptance and meaningful contact involving everyone.

Our relatively multicultural policy can improve on mainstreaming the diversity agenda so all Australians – not only migrants from non-English speaking backgrounds – become stakeholders in the social cohesion challenge. This starts with creating the conditions for intercultural contact and exchange at the local level.

In fact, many local councils and cities across Australia are now introducing strategies for building social cohesion on the basis of improved contact, dialogue and exchange between all citizens, and not exclusively involving non-English speaking background migrants.

Read more: Morrison wants Muslim leaders to do more to prevent terrorism, but what more can they do?

Similarly, some Australian schools have led the way in incorporating intercultural understanding in curriculums to help their students develop the knowledge, attitudes and behaviours to respect others from different communities.

Australia must go beyond accepting diversity, a well-established demographic fact, to enshrining the foundations for a genuinely inclusive and harmonious society.