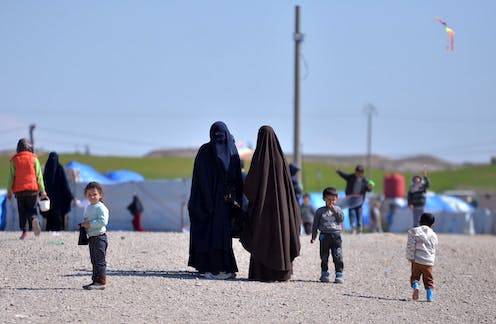 Detention camps in Syria hold about 100,000 Syrian and foreign family members of IS suspects. Murtaja Lateef/EPA

The small number of Australians being held in prison camps in northern Syria has been an ongoing, albeit low-level, challenge for the Australian government. There are believed to be eight Australian fighters for the Islamic State in...

The small number of Australians being held in prison camps in northern Syria has been an ongoing, albeit low-level, challenge for the Australian government. There are believed to be eight Australian fighters for the Islamic State in captivity, along with around 60 Australian women and children.

Despite its reluctance, the Australian government may eventually feel obliged to bring many or all these people home.

So far, the Australian public seems to have accepted the government’s line that it’s too dangerous to extract them from Syria. As Prime Minister Scott Morrison succinctly put it:

I’m not going to put any Australians in harm’s way.

The government believes there are valid security concerns in bringing these people back to Australia. Home Affairs Minister Peter Dutton has claimed some of the women are “hardcore” and “have the potential and capacity to come back here and cause a mass casualty event”.

Identifying these people, gathering evidence about their crimes and managing domestic fears would be a big challenge.

However, the government’s position on extracting them from Syria has become less tenable after the Turkish invasion of northern Syria in October. This followed US President Donald Trump’s announced withdrawal of the American military buffer in the region.

The invasion added uncertainty to an already fraught situation. The Kurdish-dominated Syrian Democratic Forces, who were central to the defeat of the Islamic State, were compelled to reinforce their forces on the border with Turkey.

Many of their forces have been engaged in controlling prison camps in northern Syria, where about 12,000 men and boys suspected of Islamic State ties, including 2,000 to 4,000 foreigners from almost 50 countries, are held. Some camps also hold about 100,000 Syrian and foreign family members of IS suspects.

The invasion focused attention on the state of the camps, which are overcrowded, unsanitary and experiencing considerable unrest. There have been some escapes from the camps, and many fear they are close to collapse.

The situation increases the possibility that young people in the camps will be radicalised.

Last week, the US government, which has repatriated some of its nationals, offered to help allies, including Australia, rescue their citizens from northern Syria. On the same day, Turkey called on Australia to repatriate its IS fighters and their families in Turkish custody.

Groups like Save the Children and Human Rights Watch have also called for the repatriation of women and children in the prison camps.

In Canberra, shadow home affairs minister Kristina Keneally has also argued Australia has a moral obligation to repatriate the women and children who were taken to Syria against their will. 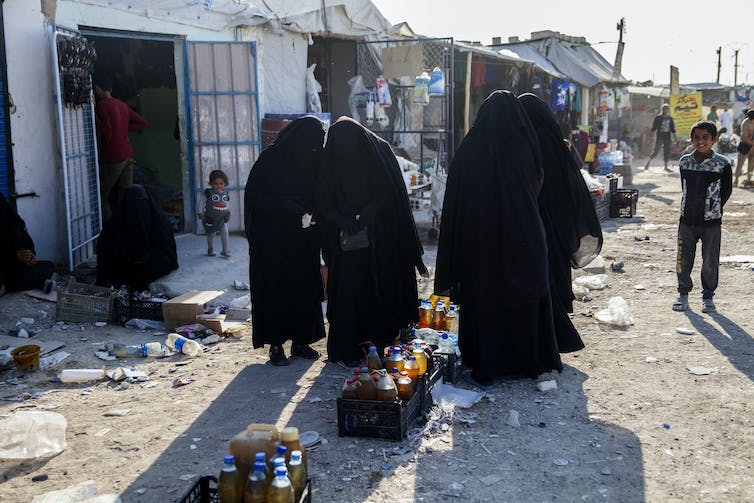 Al-Hawl camp in northern Syria where eight Australian IS fighters and some 60 women and children are believed to be held. Tessa Fox/AAP

Barriers to bringing detainees back

While Australia has not joined the Dutch in outright rejecting the US offer, the Morrison government has shown no enthusiasm for the idea.

Its position has been further undermined by the actions of other nations with citizens in the camps. Kosovo, Uzbekistan, Tajikistan and Kazakhstan, for example, have already repatriated hundreds of prisoners.

And Britain is considering options for repatriating its citizens. A government document reported on last month said,

While difficult, the practical challenges in arranging and implementing an extraction (of IS suspects) are likely to have solutions.

Australia, by contrast, has continued to focus on the difficulties of extracting its citizens from the area, rather than tackling the legal challenges associated with bringing them home. Our legislative framework is still not sufficiently robust to deal with returnees.

The government has had many years to figure this out. In 2014, the UN passed a resolution obliging all countries to adopt measures to deal with the issue of foreign fighters.

There are ways to try those suspected of crimes committed in another country. The principle of universal jurisdiction, for example, would allow Australia to interrogate and prosecute those currently held in Syria.

Lower-level suspects who are desperate to escape from Syria could also be required to accept certain conditions, such as restrictions on movement and contacts and participation in re-education programmes. The Australian women in the camp have already indicated they are open to this.

But instead of looking at these options, Australia has endeavoured to keep out returning fighters and their families. Laws have been passed to strip some of their citizenship, running counter to several international conventions, including the Universal Declaration of Human Rights.

And the temporary exclusion orders bill passed in July gives Dutton the power to bar Australian citizens from returning home for up to two years if they are suspected of supporting a terror organisation.

There are few other options

Some governments have suggested that IS captives in Syria should be transferred to Iraq, where trials of suspected IS members have already been held. The problem with this idea is that Iraq’s justice system is deeply flawed and has imposed the death penalty after some highly dubious trials.

For example, France sent some suspects there only for them to be summarily sentenced to be hanged.

Equally unacceptable would be to allow the Australian prisoners to fall into the hands of the Syrian regime.

In coming months, as conditions in the camps deteriorate and Syrian government forces expand their control of the area, we can expect mounting pressure on governments like Australia’s to repatriate their citizens.

In the long run, these are Australian citizens who should be entitled to the benefits that come from that, including due process of law. It is hard to see how the government can continue to deny their rights.