The media have been itching for a report that blamed Labor’s defeat on a dud leader. But the Review of Labor’s 2019 Federal Election Campaign, chaired by former Rudd and Gillard government minister Craig Emerson and former South Australian premier Jay Weatherill, is proportionate in the blame it sends Bill Shorten’s way. Shorten’s unpopularity contributed to Labor’s defeat, but there were wider problems that cannot be put down to leadership alone.

The review is a nuanced account of why Labor lost. Its brief explanation for that loss – a combination “of a weak strategy that could not adapt to the change in Liberal leadership, a cluttered policy agenda that looked risky and an unpopular leader” – belies the sophistication of the report as whole.

The document does better than most post-election analysis that has so far come from within the party. Some of this has been so tendentious and self-serving that its value in either explaining what went wrong or in pointing a way forward has been close to nil.

The review suggests that central to the party’s failure was that it did not reassess its approach adequately when Scott Morrison replaced Malcolm Turnbull. Rhetoric that might have made sense when the Liberal Party was being led by “Mr Harbourside Mansion”, as well as proposing business tax cuts, made rather less sense once the “daggy suburban dad” in the baseball cap was in charge.

Labor made too little of the chaos in the Coalition. Instead, the ALP made itself the issue at the election, a kind of government-in-waiting with a target on its back.

University-educated voters in the southern states, when they tuned in to Morrison, might have heard a sound something like the air escaping from a whoopee cushion. And such voters swung to the Labor Party in the election.

But voters in the suburbs and the regions, especially in Queensland, liked what they saw. So did professing Christians, who liked it even more when they saw photos of the devout believer at prayer, right arm pointing to heaven. 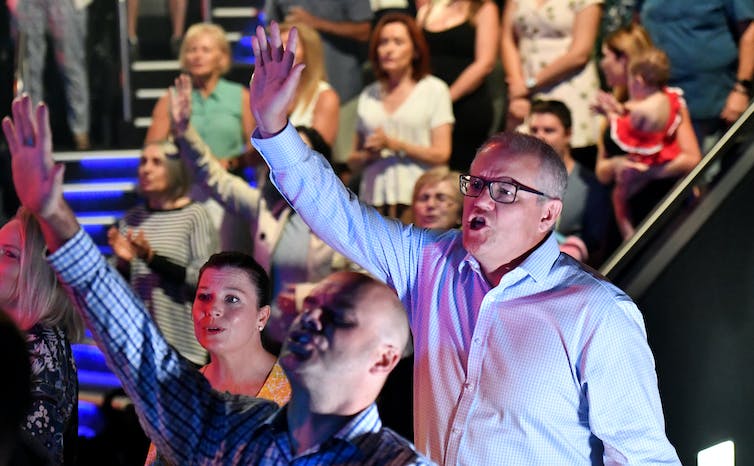 Christian voters swung behind the devout Scott Morrison in the 2019 election. Mick Tsikas/AAP

On the other hand, many voters saw a danger to their already insecure lives in Labor’s multitude of expensive promises – and the taxation changes proposed to pay for them. They believed Morrison when he warned them of the risks of voting Labor.

Then there was coal. The authors of the report do seem to struggle with Adani. Like just about everyone else, they know it’s a financial and environmental mess. But in terms of electoral politics, Adani is radioactive.

Labor suffered in Queensland and the Hunter Valley as a result of its ambiguity, but the authors are silent on what the party could have done differently. If it had been less ambiguous about Adani, it would have needed to take a stand. But what should that stand have been?

The report is insistent that Labor should not alienate progressive and well-educated voters for whom climate change matters a lot and Adani is toxic. But how can it avoid their alienation while also pleasing economically insecure voters in Queensland? Is this simply a matter of finessing one’s language, or do the problems run deeper?

This is perhaps the report’s weakness. It is good at setting out the kinds of dilemmas Labor faces, which the party failed to grapple with at the 2019 election. It bemoans the party’s tendency to become the vehicle for various interests with diverse grievances, at the expense of serving the needs of economically insecure working-class voters. The habit of trying to serve too many masters multiplies policies and increases the complexity of campaign messaging, while undermining the party’s ability to craft a coherent story based on the party’s “core values”.

Yet the report has little to say on what such a narrative would look like or what those core values actually are. We are told the latter include:

improving the job opportunities, security and conditions of working Australians, fairness, non-discrimination on the basis of race, religion and gender, and care for the environment.

But there is nothing much here that would prompt an undecided voter to look to Labor rather than the Coalition, especially if they like the look of the Coalition’s leader better than Labor’s – as most did in 2019.

And then, when the review tries to set out what a “persuasive growth story” might look like, we are treated to the usual history lesson on the Hawke and Keating governments, whose “whole economic strategy” was about promoting “growth, and through it, jobs” (otherwise known as “jobs and growth”). For the Labor Party, it seems, it’s always 1983. We just need to find the winged keel to get us home.

Rather as the Hawke and Keating governments did, the review pushes any idea of redistribution, or of reducing inequality, to the very margins of Labor philosophy and policy. Indeed, the hosing down of such aspirations – modest as they were at the 2019 election – may well help to explain one of the strangest silences in the report: its failure to deal with the role of the Murdoch press.

The Murdoch media didn’t merely favour the government over the opposition. It campaigned vigorously for the return of the Coalition. And it is a vast empire, with a monopoly through much of regional Queensland, for instance. It is hard not to see in the review’s silence on this matter a clearing of the way for a future kissing of the ring of the familiar kind.

Still, there is much that is valuable in the review. There is its frank criticism of the deficiencies in the Labor Party’s strategising and the incoherence of its campaign organisation. There is the news that the party’s own internal data pointed to the possibility of the catastrophe that ultimately occurred – polling outside the party prompted a misreading of the readily available evidence.

The review is also particularly good on the damaging effects of Clive Palmer’s massive advertising splurge. And it makes a fair attempt to relate the Labor Party’s problems to wider international trends, such as the decline of trust, the insecurity of working life for many, the crisis of social democracy, and the search for convenient scapegoats – all of which have undermined the position of parties of reform.

Best of all, the review spares us a lot of rubbish about moving the party to the centre, or the right. It does make much of the need for Labor to reinvigorate its appeal to those groups who seem to have been most alienated at the 2019 election.

It recognises – correctly in my view – that Labor’s position on Adani performed unfortunate symbolic work, suggesting to people especially in parts of Queensland “that Labor did not value them or the work they do”.

But when your primary vote in Queensland is tracking at about 25% and you hold fewer than a quarter of the lower-house seats in that state and Western Australia combined, you probably don’t need a review to tell you something has to change.