The International Olympic Committee last week decided to shift next year’s Olympic marathon from Tokyo to Sapporo to protect athletes from the heat.

Tokyo’s average temperatures during the month of August exceed 30℃, with some days reaching 35℃. Sapporo, about 800 kilometres to the north of Tokyo, is expected to be 5-6℃ cooler than Tokyo at this time.

Some of Tokyo’s officials have argued for a night-time race in Japan’s capital instead, but without success.

While the move has stirred debate, shifting the events to a cooler climate will reduce the athletes’ risk of health complications that can result from endurance exercise in extreme heat.

Read more: Health Check: how to exercise safely in the heat

In September, several athletes collapsed while competing in the marathon at the World Athletics Championships in Doha, Qatar.

Despite running the marathon at midnight, the extreme temperatures – about 32℃ – meant 28 out of 68 women did not complete the race. Similar effects were seen in the men’s event.

Sustained exertion in extreme heat can lead to heat exhaustion and heat stroke. When our body is under heat stress, it moves blood to the skin to cool us down.

With prolonged exposure, this can mean a lack of blood reaching the exercising muscles, brain and other organs.

Body temperature and time of day

Read more: The ancient clock that rules our lives – and determines our health

However, endurance events in the heat present a unique challenge: extremely high body temperatures can jeopardise the athletes’ health and performance.

The 2020 Olympic marathon events were scheduled for 6am starts to avoid Tokyo’s highest temperatures. There were also plans to provide shade and coat the roads with heat-shielding material to reduce road surface temperatures.

In response to the decision to switch to Sapporo, Tokyo officials proposed changing the start time to 5am, or even 3am.

Are ‘midnight marathons’ the answer?

At night the body is in “heat loss mode”. Thanks to our body clocks, body temperature starts to drop in the late evening. It typically reaches its lowest point around 5am.

Despite this, night marathons still present challenges for athletes. As the body clock starts to reduce body temperature in the late evening to prepare for sleep, this slows down our metabolism and leads to lower energy levels. Many of us know the difficulty of getting up in the middle of the night to watch a sporting event – imagine having to compete at 3am.

And even though ambient temperatures are lower at night than during the day, overnight temperature lows in Tokyo can still be close to 30℃ in August. 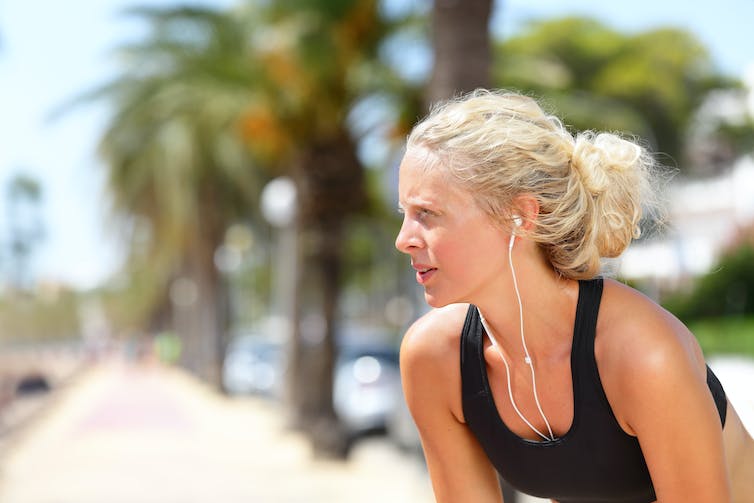 Sweating is our body’s way of regulating its temperature. But this process doesn’t work as efficiently in humid weather. From shutterstock.com

Another major factor, relevant in day time as well as night time conditions, is humidity. The process of sweat evaporating from the skin is what cools the body down. In humid environments, we can’t sweat as effectively because there’s so much water in the air – so the body can’t regulate its temperature as well.

In Tokyo, summer humidity can be well over 70%. These levels, similar to those seen during the recent marathons in Doha, mean athletes shed heat less effectively. So the combination of high humidity and high temperatures can be particularly dangerous.

Athletes have to rely on other forms of heat loss, such as radiation (via infrared rays) and what’s called convection (movement of air across the skin). But even these can be less effective as air temperature approaches skin temperature.

Alongside these physiological challenges, running in darkness is associated with greater perceived effort and over-estimation of distance travelled.

Read more: Extreme heat in sport: why using a fixed temperature cut-off isn't as simple as it seems

The race in Sapporo has been scheduled during daylight hours, which aligns better with the body clock.

Similar levels of humidity in Sapporo may still pose challenges, but avoiding extreme heat will reduce the danger of athletes overheating and suffering health complications.

The downside is the timing of this decision: with the Olympics less than nine months away, athletes and coaches have already been preparing for Tokyo and its conditions.

Read more: How do Olympic athletes learn to handle the heat?