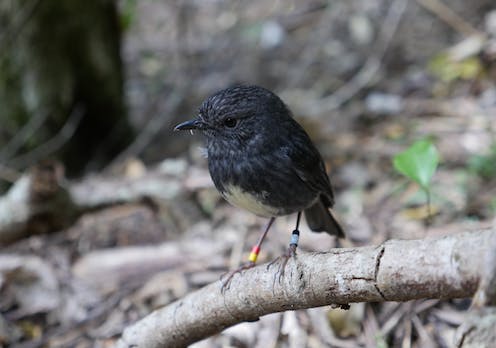 The New Zealand robin is a small and ordinary-looking songbird, but it can take down enormous invertebrate prey and hide morsels for later consumption. Supplied, CC BY-ND

When we think about animals storing food, the image that usually comes to mind is a squirrel busily hiding nuts for the winter.

We don’t usually think of a small songbird...

When we think about animals storing food, the image that usually comes to mind is a squirrel busily hiding nuts for the winter.

We don’t usually think of a small songbird taking down an enormous invertebrate, tearing it into pieces and hiding these titbits in the branches of trees to snack on later in the day. But this is also a form of caching behaviour, where food is handled and stored for later consumption.

For caching animals, the ability to recall where food is hidden is crucial for survival. My research into the spatial memory performance of a caching songbird, the New Zealand robin (Petroica longipes), shows male birds with superior memory abilities also have better breeding success. 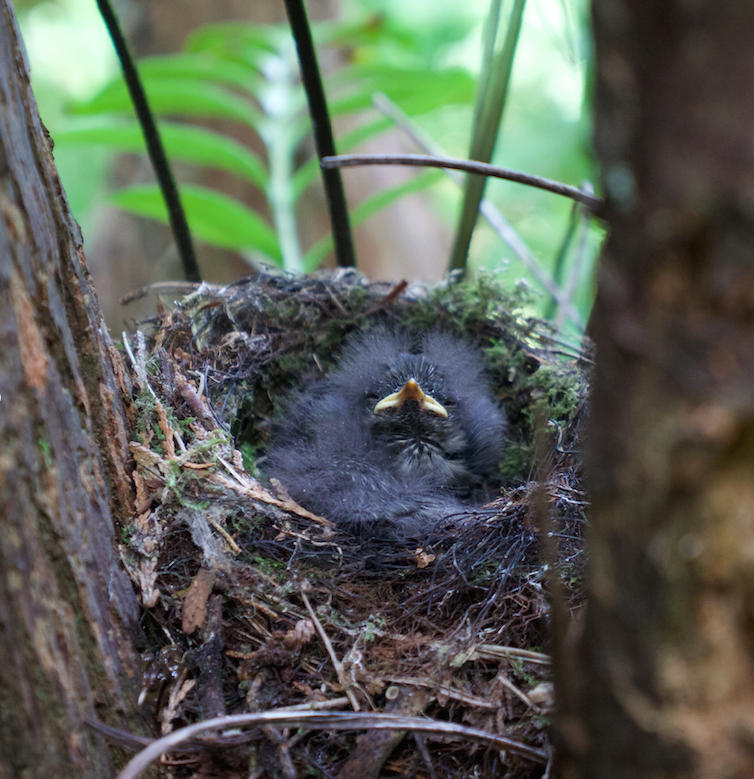 There’s no argument that New Zealand is home to a host of unusual birds, including the nocturnal, flightless parrot kākāpō (Strigops habroptila), or the hihi (Notiomystis cincta), the only bird in the world known to mate face to face.

By outward appearances, the small, grey toutouwai (Māori name for P. longipes) is not particularly remarkable. But its noteworthy behaviour includes feasting on some of the world’s largest invertebrates. There is only so much of a 30cm earthworm a 30g bird can eat, and rather than waste the leftovers, toutouwai will cache any surplus prey they don’t want to eat immediately. 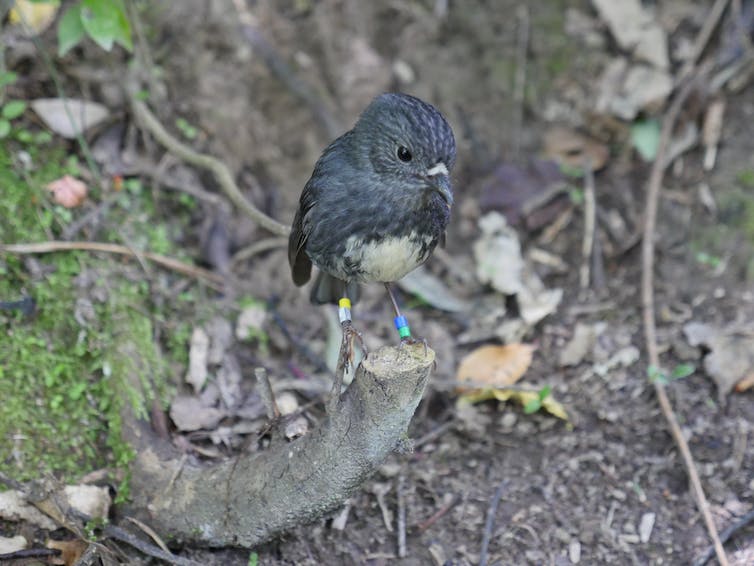 Toutouwai are the only known caching species in New Zealand.

For selection to act on a trait, there must be individual variation that is passed onto offspring and that influences survival and reproduction. While researchers had looked at how spatial memory influences winter survival in caching mountain chickadees, no one had examined whether memory performance influences reproductive success in any caching species. Our research tackles this issue.

Read more: A sperm race to help save one of New Zealand’s threatened birds, the sugar-lapping hihi

Measuring memory in the wild

We measured the spatial memory performance of 63 wild toutouwai during winter. We gave the birds a circular puzzle that had a mealworm treat hidden inside one of eight compartments. For each bird, we put the puzzle at the same location in their territory several times in a single day, with the food always hidden in the same spot.

Over time, toutouwai learned the location of the hidden treat and began opening fewer compartments to find the mealworm. We then followed these same birds through the next breeding season and looked at whether their spatial memory performance (measured as the number of compartments they had to open to find the mealworm) was linked to their ability to feed chicks, and whether it influenced the survival of their offspring.

By contrast, we did not find the same patterns for females. This is the first evidence that spatial memory is linked to reproductive fitness in a food caching species.

If there is such a great benefit for males in having an accurate recall of locations, why aren’t all males the best they can possibly be in terms of spatial memory performance? In other words, why didn’t all the male toutouwai we tested ace our memory task?

Intriguingly, our results suggest a role for conflict between the sexes in maintaining variation in cognitive ability. We found no effect of memory performance on female reproductive success, suggesting that the cognitive abilities that influence reproductive behaviour may well differ for females.

Such a difference between the sexes would ultimately constrain the effect of selection on male spatial memory, preventing strong directional selection from giving rise to uniformly exceptional memory in our toutouwai population.

Our work produced some tantalising evidence for both the causes and consequences of variation in cognitive ability, but it also raises several more questions. For example, while we’ve shown that memory performance matters for males, we still need to examine how it influences caching behaviour.

Another mystery that remains is why spatial memory ability may have less of an influence on female toutouwai fitness. One possibility is that longer-term spatial memory for specific locations (rather than the short-term memory we measured) may matter more for female reproduction, because females do all of the nest building and incubation.

So far, we’ve only provided one piece of the puzzle. To get the full picture of how cognition evolves, we have many more avenues left to explore.