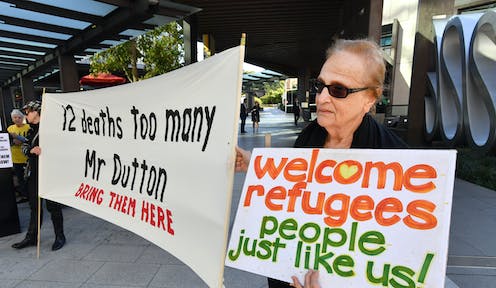 Tasmanian Senator Jacqui Lambie has some sobering reading to do over the coming weeks: an 88-page Senate report into the government-sponsored bill to repeal the medevac law that allow refugees and asylum seekers in Papua New Guinea and Nauru to seek medical care in Australia. The publication of the report last Friday paves the way for a Senate vote on the bill in mid-November.

As predicted, the Senate committee that issued the report split along party lines, with the Coalition majority calling for the medevac provisions to be repealed and the ALP, Greens and Centre Alliance senators releasing dissenting reports.

What is less predictable is how the report will influence Lambie’s deciding vote. She has indicated she will approach the bill as a conscience vote, saying

The medevac law allows a person to be transferred to Australia for medical treatment or assessment if two Australian-registered doctors recommend such care is necessary and unavailable in PNG or Nauru. There are limited exceptions for the minister of home affairs to reject a transfer on security and character grounds.

Since the law came into effect in March, over 130 people have been transferred for care.

The Coalition government maintains the pre-medevac medical transfer policy for refugees was adequate. This allowed transfers only in life-threatening cases in which the required specialist medical care could not be provided on PNG, Nauru or a third country like Taiwan.

However, evidence given to the Senate committee showed a drastic drop in medical transfers to Australia from 2015 to mid-2018, despite clear medical need.

Statistics given to the committee by the National Justice Project, a not-for-profit legal service that acts on behalf of refugees, documented how some patients had to wait more than four years for medical transfers to Australia.

Court injunctions and prospective litigation from mid-2018 onwards did compel the government to bring around 350 people to Australia for urgent medical treatment or as an accompanying family member. But such court interventions can be costly, slow and resource-intensive for those in need of immediate medical attention.

Read more: Peter Dutton is whipping up fear on the medevac law, but it defies logic and compassion

And that need is still extremely high for those refugees remaining in offshore detention. An independent health assessment in June found a staggering 97% of those in detention and processing facilities have been diagnosed with physical health conditions. A further 91% were experiencing mental health problems, including severe depression and PTSD.

All but two of the 95 public submissions received by the committee were strongly in favour of retaining the medevac law.

Tellingly, those two submissions were from the Department of Home Affairs and the International Health and Medical Service, a government-contracted health provider on Nauru.

What is missing from the Senate report is any mention of the intolerable situation that refugees and asylum seekers face even after they have been transferred to Australia.

Although people can access critical medical treatment here, most remain in community detention, facing economic insecurity and legal uncertainty about their future. Research shows such legal limbo can lead to feelings of despair and dehumanisation.

The day before the report’s release, 32-year-old Afghan doctor Sayed Mirwais Rohani died in Brisbane, the victim of an apparent suicide. Rohani had come to Australia for medical treatment two years ago, after spending four years in immigration detention on Manus Island.

After his death, his former roommate posted on Facebook:

Rohani’s death was at least the 13th among refugees held in offshore detention on Manus or Nauru.

‘Trying to kill themselves because they’ve lost hope’

No doubt the government will use the Senate report to convince Lambie to support its bill when the vote happens next month.

So far, Lambie has remained relatively reticent, even if she did rebuff Dutton’s claim that the “vast majority of veterans” want her to vote to repeal medevac.

Instead, Lambie indicated she would look to “national security” considerations in weighing up the report’s findings, including the dissenting reports. She has in the past called for children not to be in immigration detention and voted against the Coalition government’s bill to introduce temporary refugee visas in 2014.

Even if the medevac provisions stay in place, the status quo of Australia’s offshore detention regime remains unsustainable and inhumane.

As former MP Kerryn Phelps, a key architect of the medevac law during her brief time in parliament, stated in her evidence to the Senate committee, refugees and asylum seekers are

not trying to make a point; they’re trying to kill themselves because they’ve lost hope.