It’s deeply ironic that Indonesia’s third president, BJ Habibie, died on September 11 – less than a week before the national legislature passed a law that gutted the highly-regarded Anti-Corruption Commission (KPK), effectively killing it.

On one level, the irony is because Habibie was forced to abandon his attempt to retain the presidency in 1999 precisely because of the type of corruption scandal the KPK has been so successful in uncovering and prosecuting.

Habibie had a flawed record that included his past as a member of Soeharto’s inner clique, his often eccentric behaviour, and his grandiose technology projects as Soeharto’s Minister for Research and Technology.

On another level, the irony is because, for all his flaws, Habibie became a key champion of the dramatic reform process that transformed Indonesia between 1999 and 2002 and eventually led to the establishment of the KPK.

Habibie was once a crony of President Soeharto, whose repressive regime lasted three decades to 1998 before Habibie succeeded him. Yet in his 517 days in office, the shortest of any Indonesian president, Habibie presided over some of the most important legal and political changes in his country’s history.

He oversaw the unravelling of his mentor’s corrupt authoritarian system, launching Indonesia on the path towards liberal democracy and a more open and contestable economic and political system.

It is yet another irony that Habibie’s failed candidacy in 1999 proved how much the system had changed under his rule.

Habibie sworn in as president.

The accidental father of democracy

It is often said Habibie had little choice in all this. He began as an unpopular vice-president who found himself in the top office only because Soeharto was forced to step down.

Habibie’s grasp on power was tenuous from the start. Ambitious and jealous rivals surrounded him, including in the military, and Indonesia was erupting into violence amid what was then called “Kristal” – total economic and political crisis (krisis total).

On this account, Habibie’s sudden embrace of democratisation was simply the only way he could cling to power.

His sternest critics even accuse him of doing so chiefly to allow Soeharto’s New Order elite the chance to reconfigure and guarantee their survival, as most of them did.

There is truth in this, but it’s not the whole truth. Habibie was certainly in a very difficult position when he was sworn in on May 21, 1998. However, he made a decision that some of his rivals – then General Prabowo Subianto, for example - would not have: to embrace the liberal democratic aspirations of the Reformasi movement.

And he did so at considerable political risk, with Prabowo even said to have turned up at the palace with trucks full of soldiers to voice his objections to Habibie’s rule.

I was able to meet Habibie several times during his presidency, and he convinced me that his conversion to Reformasi was genuine. Even then, he insisted democratisation would come to be seen as his legacy – something that seemed very unlikely when he left office in 1999. 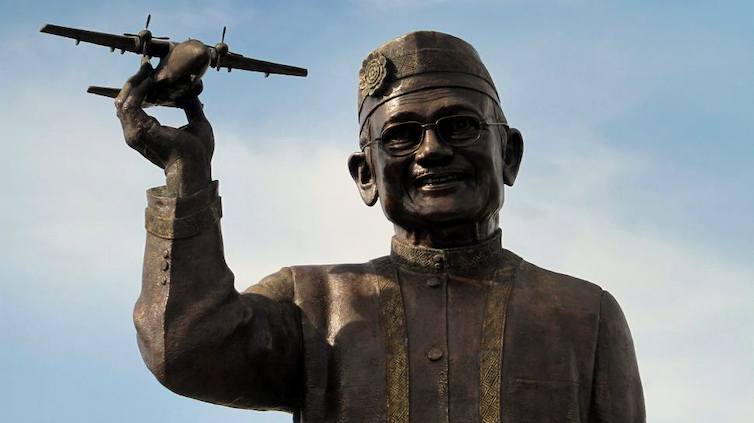 History was on his side, he said. And after years of self-imposed exile in Germany to let tempers cool, he guaranteed his legacy by publishing his well-received memoir, Decisive Moments. This portrayed him as the determined father of democratisation, an image now widely accepted in Indonesia.

Habibie became closely identified with the Reformasi movement, which was determined to end the elaborate corruption “franchise” Soeharto had developed. This tied the political, business and military elite together in a complex web of patronage, much of which is, sadly, still intact.

Soeharto’s corruption franchise allowed Indonesia’s commercial world to be dominated by a tiny group of interconnected families. But pulling this apart could never even be attempted unless Indonesia established something it never had before – an independent, powerful, committed and untouchable anti-graft institution.

To the surprise of many, the KPK, established in 2002, became precisely this. So it’s not hard to understand why the political and commercial elite have always utterly loathed – and feared – it.

Many, like Habibie, are cronies who had survived Soeharto’s fall. Others are newcomers, but just as keen to reap the spoils of power, including by recovering the vast amounts they have to pay to win election or appointment.

All have good reason to hate the KPK.

In more than a thousand prosecutions, it has lost just one. It has used wiretaps and raids to bring down corrupt police, prosecutors, judges, tycoons, bankers, generals, provincial governors, members of every political party, ministers, and even a speaker of the national legislature. It has been hugely successful and is hugely popular with the public as a result.

Politicians have thrown everything they have at the KPK for more than a decade, but it has repeatedly used its popular support to force presidents – including New Order survivor Susilo Bambang Yudhoyono – to back it against the elite.

On that day, the legislature passed a new law that makes wiretaps, searches and seizures impossible without permission of new supervisory board appointed by the president.

Few hold out much hope the current president, Joko Widodo (Jokowi), will appoint a board sympathetic to the KPK’s anti-corruption agenda. In fact, he recently approved the new head of the KPK, a senior police figure who faces allegations of corruption. The board is expected to block investigations and leak like the proverbial sieve. 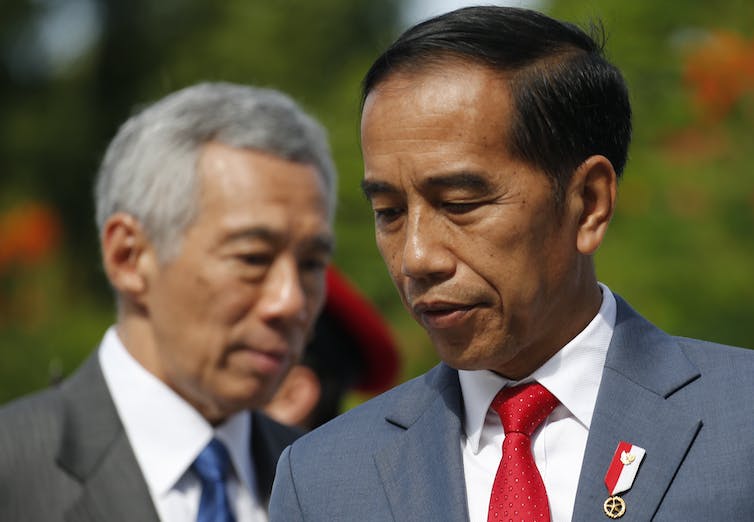 For weeks, Jokowi has been under intense pressure from civil society and street protesters to issue an emergency decree to revoke the new KPK law, but so far he has declined. This is largely because he’s under even stronger pressure from political parties to keep the law in place.

What’s more, he’s being pressured from the powerful police force, a bitter enemy of the KPK, which he has allowed to gradually place proxies across a host of other key state agencies, from cabinet to the powerful intelligence agency to the national logistics agency, among others.

And here lies yet another irony. Jokowi is the first president since Soeharto not to have been a political player under the New Order. He was first elected because he was seen as a cleanskin outsider, not comprised by elite politics.

Yet it is he who has allowed the KPK – a key institution of democratic governance, created by the post-New Order reforms – to be crushed.

That says a lot about where Indonesia stands today, two decades after Habibie’s short but catalytic presidency.

The gutting of the KPK is not an isolated incident. Liberal democracy in Indonesia is now under siege by the elite. The politicians – dominated by major parties tied to wealthy oligarchs and media barons (or both) – have also been pushing hard to introduce a highly regressive new Criminal Code.

This would wind back the press freedoms won under Habibie by making it a criminal offence to criticise the president or the courts.

It would also criminalise all extra-marital sex, a provision that has horrified Australian tourists, but is actually far more threatening to LGBT+ Indonesians who are facing a new wave of persecution across Indonesia.

And it would expand existing blasphemy laws that over the past 10 years have been used with unprecedented frequency to harass minority religions and unorthodox Muslims.

Also on the list is a new cyber security bill that would transform an existing body – headed by a former army general – into a super-agency with extraordinary powers. It could censor the internet, delete material, block sites and slow it or stop it all together, things Soeharto could only have dreamed of.

Most worrying of all, the political elite are now openly discussing the possibility of constitutional amendments that would reintroduce aspects of Soeharto’s repressive system.

Some have even publicly suggested this could eventually lead to the end of direct public election of the president, putting his selection back in the hands of legislators.

If these laws are passed, Indonesia’s post-Soeharto transition towards liberal democracy will not have much outlived Habibie, who presided over its birth.

How could all this have happened? The courageous young men and women who led the Reform movement from 1998 to 2002 and beyond are now in their forties and fifties. Most have now moved on from the NGOs and lobby groups that defined the liberal democratic agenda. Their children, netizens with little memory of the evils of the New Order, are now the voice of the people.

In fact, the median age for Indonesians is as low as 31, and as many as 40% are under 24. They like the KPK but perhaps they don’t really understand how important it has been as the litmus test of Indonesian governance. 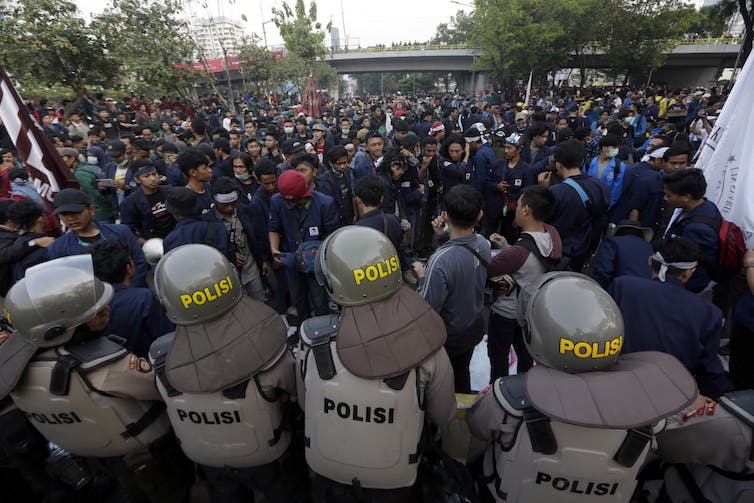 Protesters haven’t built the enormous numbers or the anger that intimidated the elite in the late 1990s. EPA/Mast Irham

They have protested in the streets, and three have tragically died, but they haven’t built the enormous numbers – or the anger – that intimidated the elite in the late 1990s.

So, while they have managed to have the proposed Criminal Code put on hold for now, they haven’t been able to force Jokowi to reverse the KPK law, as he could easily do if he wanted.

The cyber security law, and a number of other regressive laws, are still on the agenda, as is the disturbing talk of constitutional amendment.

Read more: 'Continue the fight!': a '98 activist reflects on the 2019 student movement in Indonesia

The more you think about it, the more stark the differences are between Habibie and the current president.

Habibie never served a full term, but on October 20, Jokowi will be sworn in for his second five-year term.

Against the odds, Habibie cemented himself a place in history as the leader who presided over Indonesia’s transition towards liberal democracy.

The question now is whether history will remember Jokowi for presiding over Indonesia’s slide back towards authoritarianism.