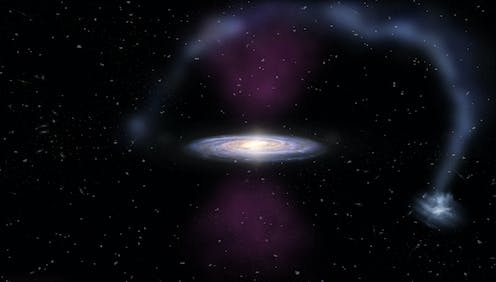 Conical jets of radiation burst from the black hole at the centre of the Milky WayJoss Bland-Hawthorn, Author provided

The supermassive black hole at the heart of our Galaxy spat out an enormous flare of radiation 3.5 million years ago that would have been clearly visible from Earth.

In new research that will soon be published in the Astrophysical...

The supermassive black hole at the heart of our Galaxy spat out an enormous flare of radiation 3.5 million years ago that would have been clearly visible from Earth.

In new research that will soon be published in the Astrophysical Journal my colleagues and I found that the flare left traces in a trail of gas called the Magellanic Stream that lies some 200,000 light years away and encircles the Milky Way.

The discovery changes our view of our galaxy’s central black hole, which has appeared dormant throughout recorded human history. Astronomers are coming to realise that it has been hugely active, even explosive, in the relatively recent past in galactic terms (measured in millions of years).

Radiation flashes out from the hot spinning gas around the supermassive black hole at the centre of the Milky Way, leaving traces in the Magellanic Stream. Credit: James Josephides / Swinburne University.

This activity has been flickering on and off for billions of years. We don’t understand why this activity is intermittent, but it has something to do with how material gets dumped onto the black hole. It might be like water droplets on a hot plate that sputter and explode chaotically, depending on their size.

Our situation on Earth resembles living near a largely dormant volcano like Mount Vesuvius that is known to have been explosively active in the past, with disastrous consequences for Pompeii.

Despite this, there’s no need to be alarmed: as far as we can tell, we are safe here in orbit about a cool dwarf star far from the centre of the Milky Way. 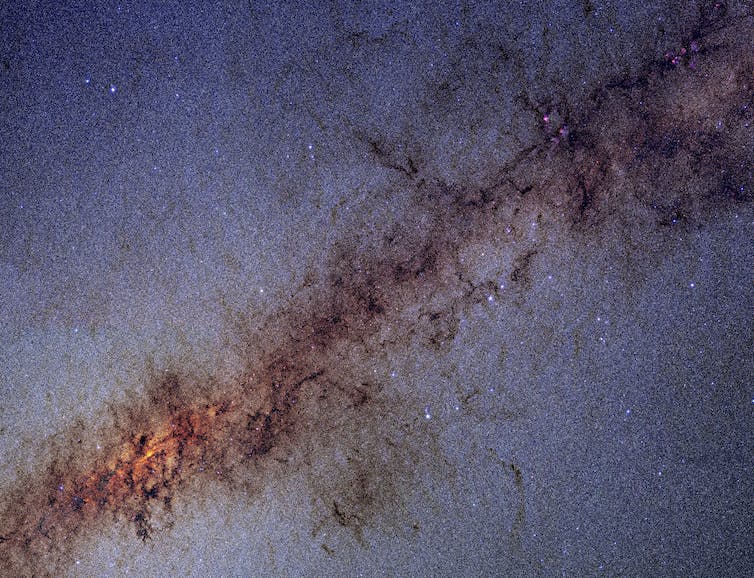 The bright area in the lower left is the centre of the galaxy. Only the densest clouds of dust can be seen in this infrared image. Atlas / 2MASS / University of Massachusetts / California Institute of Technology

Why is there a black hole at the centre of the galaxy?

If you look along the Milky Way in the direction of the constellation Sagittarius, you will see the dense agglomeration of stars around the centre of the galaxy. The galactic centre is marked by a very dense, very massive cluster of stars orbiting the supermassive black hole.

Earlier this year, the ESO Gravity team found a star close to the black hole travelling at up to 10,000 km per second, a few percent of the speed of light. This let them weigh the black hole to a precision of 1%, arriving at a number of about 4 million times the Sun’s mass.

Read more: Einstein’s theory of gravity tested by a star speeding past a supermassive black hole

Essentially all large galaxies have central massive black holes. We don’t know exactly why this is so, but we know it’s important and that the growth phases of these monsters are likely to have affected the galaxy as a whole.

Understanding the effect of interactions between black holes and host galaxies is one of the hottest topics in modern astrophysics.

Some black holes are more active than others

But if we look out across the Universe, we see only a few percent of galaxies appear to have “active” black holes. By active, we mean that gas and stars spiralling into the black hole form an extremely hot ring of gas.

This ring, called an accretion disc, gets so hot that it drives jets, winds and radiating beams of light out across the galaxy. The effects of these explosions are particularly impressive in more massive galaxies.

Read more: Sizes matters for black hole formation, but there's something missing in the middle ground

For decades, Australian radio telescopes have mapped out jet flows that are far larger than the visible galaxy in the middle.

The radio jets in the galaxy Centaurus A extend more than 10 degrees across the sky – that’s the size of 20 full moons next to each other. This is remarkable given Centaurus A is 10 million light years away. 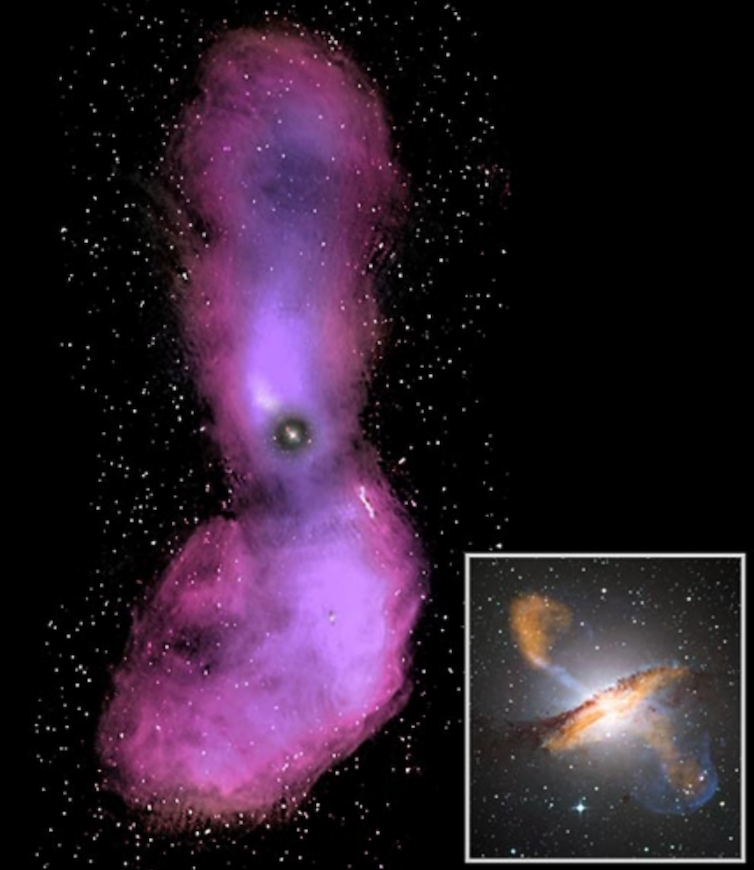 Some three million years ago, our direct ancestor Australopithecus afarensis walked the Earth. They may well have looked up towards Sagittarius and seen cones of light shooting sideways from the Milky Way, brighter than any star in the night sky.

The lightshow would have appeared as static beams on a human timescale, only flickering on timescales of thousands of years. Today, the only visible remnant of that immensely powerful event is the cooling gas along the distant Magellanic Stream.

So how would life on Earth have fared if the explosive jet was directed straight at us? This is a valid question, because we believe that the spin axis of the accretion disc flops around wildly in lightweight supermassive black holes.

The beams of radiation from the black hole’s accretion disk flop around in different directions over thousands of years. Credit: Phil Hopkins / Caltech.

If the beam was pointing at the Solar System, the jet would have to plough through the Milky Way disc, and it would take about ten million years to reach us.

So it’s possible that a more ancient explosion could have produced a powerful jet that is yet to reach us.

But we need not worry – at its peak, the intensity of the jet when it reaches us is unlikely to exceed the most energetic solar flares. These are known to knock out satellites, and pose a threat to space-walking astronauts, but our own atmosphere largely protects us on Earth.