Western Australia boasts seemingly endless fields of pink, white and yellow everlasting daisies. But while there might seem to be an infinite number, one species in particular is actually endangered. The showy everlasting (or Schoenia filifolia subsp. subulifolia) once grew in the Mid West of WA. Now it is found in just a few spots around the tiny inland town of Mingenew.

But a WA primary school is helping my colleagues and me save the beautiful showy everlasting. With new seed banks, a genetic project and a whole lot of digging, we’re hopeful we can keep this gorgeous native daisy around for the next generation.

A grower and a shower

The first European to collect the showy everlasting was eminent botanist James Drummond, most likely in the mid-1800s. Initially the species was placed in the Helichrysum family (a group of plants also known as everlastings), but in 1992 botanist Paul Wilson formally described the species based on a specimen collected from Geraldton.

The genus name Schoenia is in honour of the 19th-century eye specialist and botanical illustrator Johannes Schoen, and the species name filifolia refers to its long, slender leaves. 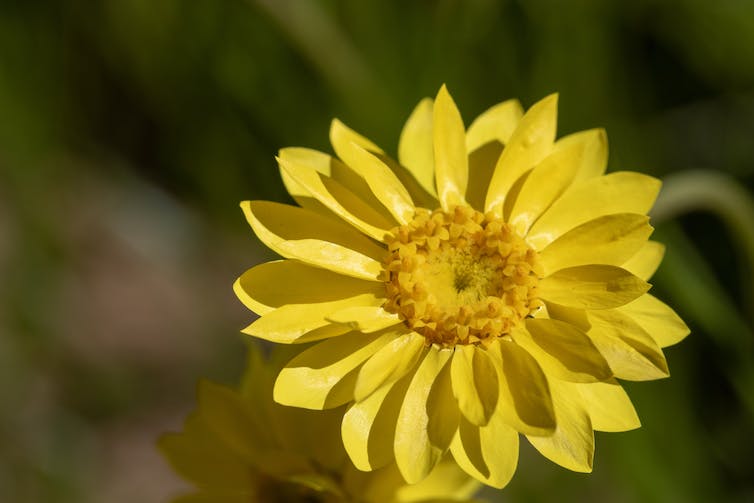 Everlastings get their name from the fact that that the flowers hold their colour long after they have been picked and dried. The species is known as the showy everlasting because its large, brightly coloured flowers put on a spectacular show when in bloom.

Read more: Waratah is an icon of the Aussie bush (and very nearly our national emblem)

Collections of the showy everlasting housed in the Western Australian Herbarium indicate the species was once more widespread. It’s likely land clearing for farms and infrastructure led to the disappearance of the species from much of its known range.

It was listed as endangered in 2003. At that time the species was found in just three locations. At each of these sites, threats such as chemical drift from nearby agricultural land, grazing by animals, competition from weeds, and increasing soil salinity were all jeopardising the survival of the species.

Unfortunately, by the late 2000s two of these three populations had succumbed to these threats and were lost. However, continued search efforts since then have uncovered two new populations. The showy everlasting is hanging on, but a concerted conservation effort is needed to ensure its survival in the wild.

To ensure the long-term survival of the showy everlasting, we need to establish new populations – a process called translocation.

As an insurance policy, in 2007 seeds were collected and frozen in the Threatened Flora Seed Vault at the Western Australia Seed Centre. In 2015 my colleagues and I used some of these seeds in small-scale translocation trials, successfully getting new plants to grow, flower and seed in three small populations.

Despite this success, we knew the populations would need to be much, much larger and we would need many more populations to ensure persistence of the species. And for that we needed more information about the showy everlasting’s biology, and larger amounts of seed.

Currently a genetic study is underway to look at the difference between the showy everlasting in different locations and its sister species. As part of my PhD study with Murdoch University, I am running a glasshouse experiment to see whether different populations of the showy everlasting can cross and produce viable seed, and whether there are benefits or risks to such crosses.

The initial translocation trials have proved we can successfully establish new populations, but we’re currently limited by the amount of available seed. This is because our trials showed the most efficient way to establish the showy everlasting is by planting seeds directly into the ground. However, this process uses a lot of seeds – more than we have stored in the Seed Vault. Rather than denude the wild populations, we needed a new source.

Fortunately, at this time Andrew Crawford, manager of the Threatened Flora Seed Vault at the Western Australian Seed Centre, was approached by the principal of the Woodlupine Primary School, Trevor Phoebe. He was looking for a meaningful way to involve his students with plant conservation. This led to the establishment of a seed production area at the school which aims to grow and harvest seed of the showy everlasting. The students at the school are involved with planting, monitoring and taking care of the plants, and will help collect the seed when they ripen.

It is still early days for this project, however early signs are promising. Seedlings have established well and have begun flowering. Seed collection is planned for later in the year.

The seed harvested will be used in the future to boost plant numbers in the existing populations, and to establish new sites, hopefully securing this beautiful species in the wild so that everyone can enjoy the showy everlasting for decades to come.