If you have a question you’d like an expert to answer, send it to curiouskids@theconversation.edu.au. Why are some twins identical and some not? - Chloe, age 12, Australia We have spent many years explaining how genes work to people who would like to have children, so we’re happy to answer this excellent question. There are two types of twins: fraternal and identical. Fraternal twins may be born on the same day but are not genetically the same. They look different, have different genes and may be of the same sex or the opposite sex. Identical twins, on the other hand, look the same, share the same birthday and share the same genes. They are the same sex, meaning they will both be girls or they will both be boys. To understand why, we need to look at what happens at the time a pregnancy starts. We call the start of a pregnancy the time of conception. Read more: Curious Kids: Why do people grow to certain sizes? What happens when a woman becomes pregnant? Most women produce one egg each month. Each time a man and woman have sex, the man produces thousands of sperm. If the man and woman have sex and do not use contraception (for example a condom, IUD or the Pill), there is a chance that a sperm will fertilise the egg and the woman will become pregnant. Most of the time, a single egg is fertilised, and goes on to develop into a single baby. If the egg is not fertilised, the woman will soon have her period, which is the way a woman’s body prepares itself for a new egg to be fertilised the next month. We call a fertilised egg a “zygote”. This is a good word to remember, as we use it to help us understand the different ways identical twins develop during pregnancy (and knowing a word like zygote might impress your science teacher one day). 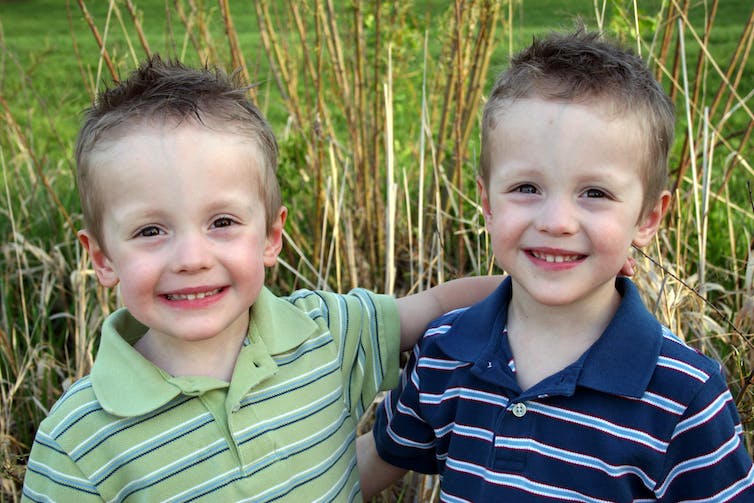 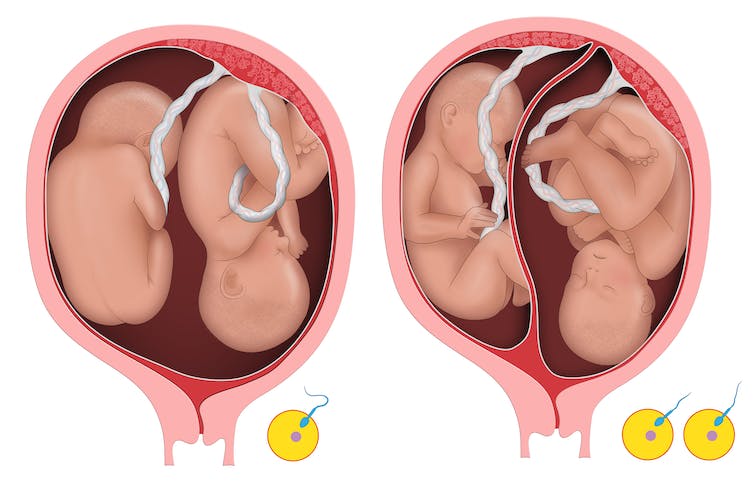 Identical twins come from a single zygote that splits in two. Non-identical twins happen when a woman produces two eggs (in the same month) and both eggs are fertilised by two different sperm. Shutterstock Interestingly, there are more non-identical twins in Australia now than there have been before. The number of twin pregnancies has grown over the past 30 years. This might be partly because women in countries like Australia are having children when they are older and the chance of a twin pregnancy increases as women get older (as they are more likely to produce more than one egg in the same month). The chance of a twin pregnancy is also higher if a couple uses assisted reproductive technology to help them to become pregnant. Read more: Curious Kids: how do babies learn to talk? Hello, curious kids! Have you got a question you’d like an expert to answer? Ask an adult to send your question to curiouskids@theconversation.edu.au