Comedy often succeeds where tragedy fails. Fangirls, the pop musical which premiered on Thursday night in Brisbane, is not the first drama to explore our fascination with the wild, uncontrollable power of young female passion and girls’ infatuation with their boy-loves. Yet its catchy tunes, witty dialogue, and hilarious, occasionally absurdist, comic scenes set it apart.

Over 2,500 years ago, Euripides’ play The Bacchae featured a chorus of maenads, followers of Dionysus and the world’s first fangirls, who ecstatically tore cattle apart with their bare hands. Any unfortunate male who crossed their path was similarly rendered limb from limb. Fear of uninhibited female obsession runs deep.

Stephen King’s Misery, starring the psychotic uber-fan Annie Wilkes (Kathy Bates), struck a chord in our collective psyche. The delusional female fan has long been a character to be feared and shunned. At best a figure of derision, at worst a figure in need of strong medical and psychiatric intervention.

It is against this background that Fangirls seems so refreshing. This musical doesn’t stigmatise the world of the fangirl and her pop-star fixations, it revels in it. It emerges from a genuine desire to understand and celebrate its subject. Driven by such compassion, the laughs – and there are many – are never cheap.

The musical teaches us that the boundless creativity of young girls needs to run free, not be stifled by convention or ideas of proper behaviour. Armed with unbreakable determination and a few instructional YouTube clips these girls can achieve anything. The bouncy, upbeat music and dynamic video-walls that dominate the stage capture well the frenzied energy unleashed by the fangirl. Whatever it is, idol worship is not idle worship. 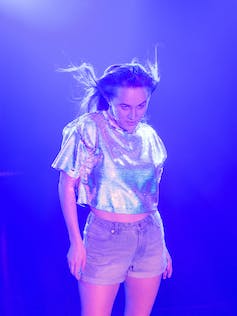 The story and music were written by the abundantly talented Yve Blake who plays the lead role of young 14-year-old Edna. The plot of the musical concerns Edna and her fixation on Harry (Aydan), the lead singer of the world’s biggest boy-band True Direction. With smouldering eyes and perfect hair, Harry’s effect on his teenage fanbase is visceral.

In an early musical number, Harry’s fans writhe around in half-agony, half-ecstasy clutching their pillowcases as they remember the first time that they witnessed him take the stage. As a former star of the hit talent show The Voice, Aydan is perfectly suited to the role.

Edna’s devotion to Harry and her unshakeable conviction that only she truly understands him is a source of tension between Edna, her school friends and her mother (Sharon Millerchip). Edna escapes from her increasingly fraught home life through the internet and the chatrooms full of True Direction fans.

Together with her online BFF Saltypringl, brilliantly played by James Majoos, Edna writes fan fiction in which she and Saltypringl imagine scenarios where they each team up with Harry to fight against their common enemies. The opponents become increasingly outrageous, but the trajectory of the stories remain the same. With the opposition out of the way, Edna and Saltypringl can each enjoy time alone with Harry as they giddily tousle those begging-to-be-played-with locks. Gradually the line between fiction and reality becomes blurred with literally riotous results.

A musical first crush with all the feels, Fangirls is bright and joyous.

In the hands of another dramatist, Edna could be a figure to be pitied. In Fangirls, you constantly cheer her on, no matter how ridiculous her plans. Her friends may treat her badly, but you forgive them as well. They possess such vitality and spunk that most crimes can be forgiven.

Edna’s frenemy Jules (Chika Ikogwe) is so fabulous in her narcissism that you forget all of the terrible things she says and does. In all her naked unrestrained power she is a joy to behold.

This musical neatly exposes the gender double standard that lies at the heart of our treatment of fangirls. We mock them for their exuberance, but if a boy showed similar passion for a footballer or cricketer, we wouldn’t hesitate to applaud such devotion.

It equally reveals the cynicism of the commercial music industry that seeks to atomise its fanbase. The songs of boy bands claim to speaking to you alone. Anyone else who thinks otherwise is delusional. It is an irresponsible strategy that promotes intense rivalries, online trolling, and fights between fans. Boy bands cause division as much as they unite.

The scenes of teenage life are painfully well observed and many parents will wince in recognition of how Edna speaks to her mother. Yet it is the warmth of the drama that shines through. This musical is a celebration of love in all its forms. It is a reminder that it is love that makes us better people, repairs shattered friendships, and teaches us to appreciate life. It is love, not some pop star – no matter how perfect the hair – that makes us whole.

Fangirls runs until 5 October at Brisbane’s Bille Brown Theatre and will open at Sydney’s Belvoir Theatre from October 12.