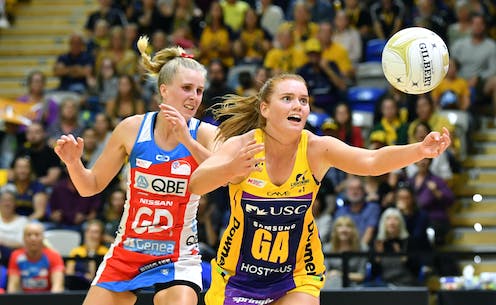 Australians love sport. Whether it be record crowds at the recent Boomers v USA basketball game, or the record numbers who sign up as loyal members of our professional teams, sport plays a major role in the Australian community.

However, it is not just what happens on the court or field that matters. A new survey from Swinburne University has found that Australians think sports organisations do more for the greater good than government, religious organisations, or business.

Read more: Trust in politicians and government is at an all-time low. The next government must work to fix that

This nationally representative survey of 1,000 people was a collaboration between Swinburne’s Sports Innovation Research Group and the Australian Leadership Index (ALI), a publicly available benchmark of leadership for the greater good across Australia.

The findings show that 31.7% of people believe that sports organisations demonstrate leadership for the greater good to a “fairly large” or “extremely large” extent.

This is somewhat higher than local (30.2%) and state government (27%) and significantly higher than national businesses (24.6%) and the federal government (23.5%). Only charities and public sector institutions are perceived more favourably by the general community.

Why are sporting bodies such good community leaders?

From a community perspective, leadership for the public good occurs when leaders demonstrate high ethical standards, prioritise transparency and accountability even when it could have a negative impact on their administrations, and are responsive to the needs of the people they serve and the community.

Integrity and ethics are increasingly important considerations for sporting bodies - many of them now have dedicated units to deal with these matters.

Our survey found respondents’ perceptions of sporting bodies’ contribution to the greater good was driven primarily by how ethical they considered them to be.

The second most important factor was accountability — the extent to which institutions are seen to accept responsibility for their negative impacts.

Taken together, this suggests the responses of sport organisations to negative issues will have a critical impact on perceptions of their social leadership.

Such issues are common and often play out in public, high profile settings. Cricket Australia’s response to ball tampering and AFL’s responses to drugs, performance enhancing or otherwise, exemplify these issues.

Finally, the apparent focus of a sport on creating positive social outcomes, such as preventing discrimination and creating equal opportunities, was the third most important driver.

From national sport bodies to individual teams and athletes, sporting bodies increasingly engage in discretionary programs and initiatives – most commonly targeting health, education, gender equality, and social cohesion – to contribute to their communities.

Which sports organisations lead the way?

The initial stage of our research tested perceptions of a number of professional sports – those that operate with large administrative structures and generate significant revenue.

Of the sports we examined, netball was the ranked highest in terms of overall leadership for the greater good (34.2%). Netball Australia led the field in terms of perceived transparency, accountability and ethical standards.

The AFL (31.4%) was next best, scoring well in terms of its focus on creating positive social outcomes and its responsiveness to the people it serves.

Of the professional sports we examined, Rugby League (25.9%) and Rugby Union (24.5%) were seen as showing the least leadership for the greater good. Both scored low on accountability, ethical standards and focus on social value.

In the case of the latter, comments from the survey indicated there was significant controversy regarding the treatment of Israel Folau. Some respondents approved of the strong stand taken by Rugby Australia towards Folau. However, others regarded his treatment as excessive and motivated by commercial concerns rather than ethics.

In Australia, sport is organised across three levels: national, state and local. Of these, community clubs are the lifeblood of Australian sport.

Notably, community sports clubs are largely sustained by volunteers. At the community club level, volunteers include coaches, officials and administrators.

Although there are many reasons why people volunteer, one reason stems from volunteers’ public service motivation.

Consistent with this, our results show that 38.3% of Australians think community sport clubs demonstrate leadership for the greater good to a “fairly large” or “extremely large” extent. This is significantly better than the results obtained for State and National sport associations and Professional Sport Leagues.

Our results raise concerns related to recent predictions that local clubs will be replaced by larger sport organisations with corporate leadership and governance structures because of growing market pressures. A possible unintended consequence of this may be a corresponding decline in public trust in the leadership and governance of sport overall.

The benefits of leadership for social good

The majority of sport organisations in Australia are public bodies, reliant on public funding and support. The exception are larger corporate sport bodies, including professional leagues and sports, that have become self sufficient via commercial sport revenue streams.

These sports organisations share a desire to serve their communities. Our research affirms this notion, showing that sport organisations, especially community clubs, perform well in communities and compare favourably to other public and private bodies.

In the context of persistently low trust in institutions, in general, and government and business institutions, in particular, sport organisations appear to offer a glimmer of hope, and a powerful example, of leadership for the public good.