In October 1969, Sydney became the focus for dedicated followers of international avant garde art. It is hard to imagine how unusual it was at that time for Australia to be the focus of anything much.

The Opera House was still being built, apparently forever. Our involvement in the Vietnam war, even though it was causing a great deal of angst, was essentially a side show in global politics. We were a long way from the rest of the world and air travel was still prohibitively expensive.

But here were Christo and Jeanne-Claude directing a motley group of students, artists and other volunteers, to make the world’s largest ever work of art – wrapping the entire coast along Little Bay.

The Art Gallery of New South Wales’ latest exhibition, Making Art Public: 50 years of Kaldor Public Art Projects, revisits some of the most iconic large-scale art presented in Australia then and since - through artworks, archival materials and reconstructions. The projects were all funded by contemporary arts patron and collector John Kaldor’s public art organisation.

In the 1960s, creative partnerships were commonly discussed as being a purely male creation, so it was not until 1994 that Jeanne-Claude was fully acknowledged as Christo’s equal. 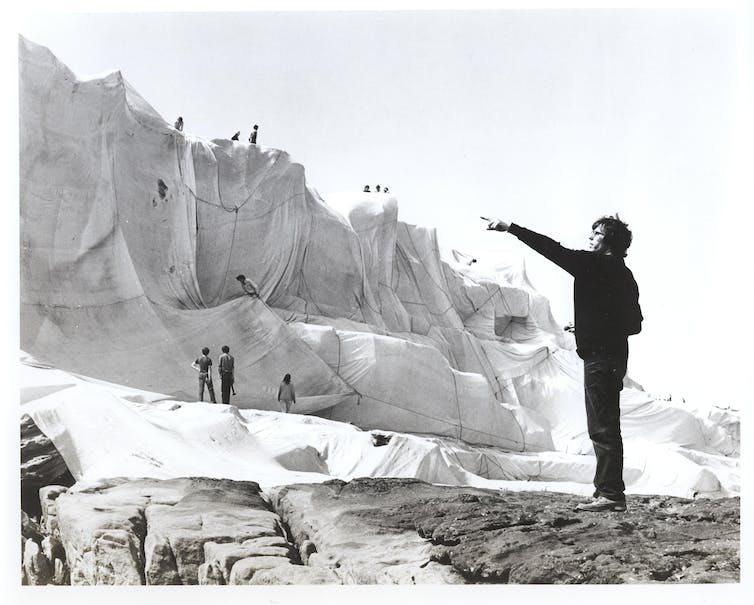 The previous year, they had wrapped the Kunsthalle at Berne in Switzerland, and had hoped to wrap a length of coast in California. There were logistical problems, all of which were solved by the persuasive Australian art collector and textiles manufacturer, John Kaldor. The Wrapped Coast used a lot of fabric.

Christo and Jeanne-Claude are now seen as major art stars of their generation. After completing Little Bay, they created headlines around the world with each event as they wrapped a Roman Wall at Via Veneto, Pont Neuf in Paris and hung a curtain across a valley in Colorado. In 1995 they realised their long-held ambition to wrap Berlin’s Reichstag. But Little Bay remains the first magnificent installation on a grand scale. Photographs record the sheer beauty of the way fabric and rope redefined the shape of the land. 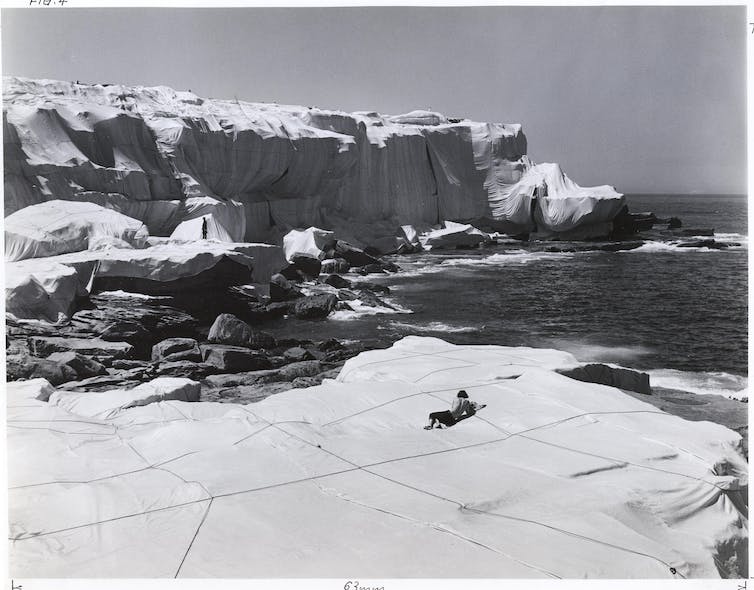 Daniel Thomas, then curator at the Art Gallery of NSW, was a passionate advocate for Christo and supported Kaldor’s offer of a wrapped gum tree as gift to the collection. It was rejected by the Trustees. In 2011, the tree entered the collection as a part of the Kaldor family’s gift of their collection to the Gallery. Now, 50 years after Little Bay, Kaldor Public Art Projects have joined with the gallery to create a survey celebrating the half century of promoting art in public.

Christo was only the beginning. In 1971, Kaldor brought Harald Szeemann, curator for Germany’s Kassel Documenta, to Australia. Szeemann looked at studios of artists, well-known, little known and unknown. The resulting exhibition I want to leave a nice well-done child here, did not result in Szeemann choosing any Australians for international stardom, but it did encourage a new generation of Australian artists to think of themselves as being part of a global community.

Some projects showed that modern art and pleasure can go well together. In 1973, Gilbert and George performed The Singing Sculpture, while the food artist, Miralda, created Coloured bread. 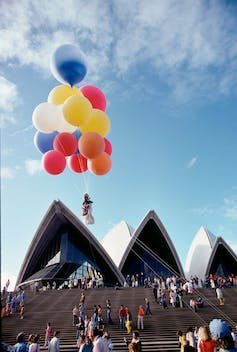 Most sensational of all was Charlotte Moorman and Nam June Paik’s 1976 exhibition and performances with TV Cello, that included Moorman naked and playing an ice cello and smothered in 13 kilograms of chocolate fudge.

Another popular event was Jeff Koons’Puppy, created in flowers outside the Museum of Contemporary Art.

Not all of the projects were so easily accessible to large crowds. The land artist, Richard Long, made A straight hundred mile walk in Australia near Broken Hill.

By way of contrast Thomas Demand’s The dailies was an intimate installation in the old Commercial Travellers’ Association headquarters, which are concealed inside Sydney’s MLC building.

The Kaldor artists have often experimented with different venues. Martin Boyce’s We are shipwrecked and landlocked was installed in the Old Melbourne Gaol, while Bill Viola’s Fire Woman and Tristan’s Ascension (The Sound of a Mountain Under a Waterfall) were installations at St Saviour’s Church in Redfern. 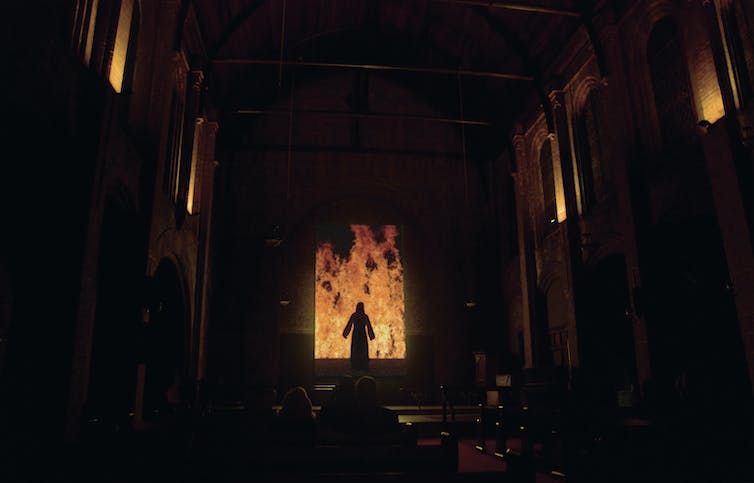 The Kaldor Public Art Projects have always relied on willing volunteer workers, many of them art students. The importance of these volunteers to the Kaldor program is explored in Alicia Frankovich’s The Work, exhibited at the Art Gallery of NSW. As a part of Project 30, Marina Abramović: In Residence the artist mentored 12 young Australian performance artists. 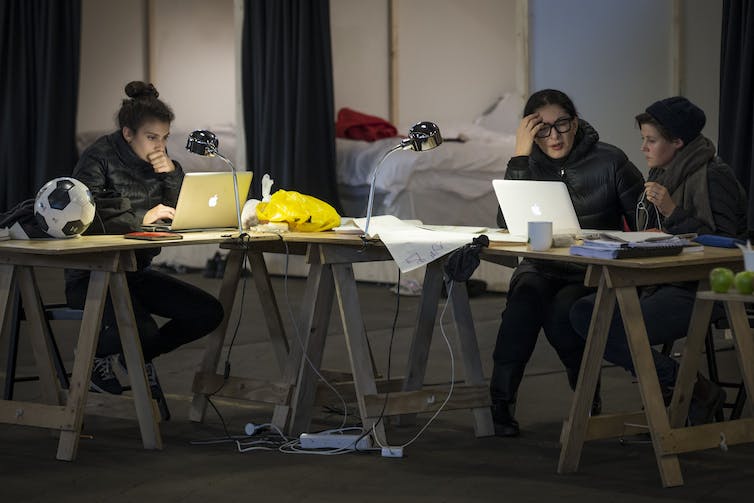 The objective always was more than just showing art to a bemused public. As a part of the current exhibition, the artist Imants Tillers, who became an artist after working on the Wrapped Coast, has created A New World Rises, an homage to the impact of the Kaldor Art Projects on his professional career. 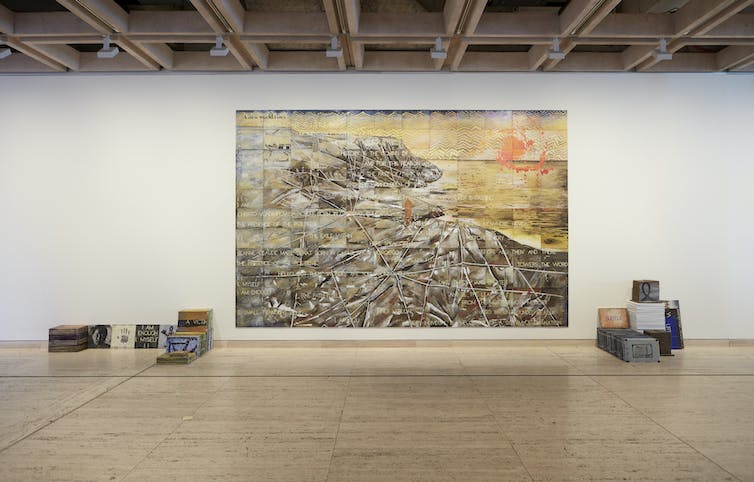 In another part of the gallery Ian Milliss, another volunteer from 1969, has created Natural Parallels 2, consisting of ropes running between four flights of stairs. Milliss had been a modernist painter before Little Bay showed him how art could be a form of political engagement.

Modern communications have made the world a more intimate space than it was in 1969. Australian artists are now self confident in approaching their history and their identity.

In 2016 Jonathan Jones confronted some of the ghosts of our past with barrangal dyara (skin and bones), the first Kaldor commission of an Australian artist.

Despite its size, (it effectively took over the top part of Sydney’s Royal Botanic Garden), barrangal dyara trod lightly on the earth. All that is left of it are the photographic records and the gypsum shields, now moved far away. 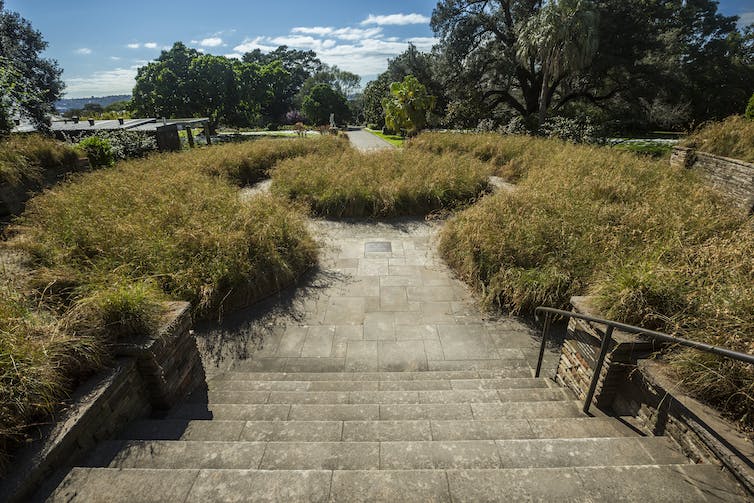 Agatha Gothe-Snape, who was born 11 years after the wrapping of Little Bay, has created Lion’s Honey, an ongoing performance tribute to the art that has helped stimulate her own practice.

The Art Gallery of NSW has recreated as much as it can of events past – using objects that have been left behind, videos and photographs.

It is an exhibition to trigger memories of experiencing, for the first time, the heady sense of being at the heart of amazing art.

Making Art Public is at the Art Gallery of NSW from Sept 7-February 16.