When TJ Perenara took the field for the All Blacks against Australia, in the critical final match of the Bledisloe Cup series last month, he wore a band around his wrist with the word Ihumātao. Perenara is one of a growing number of people drawn to support the protest against a housing development of the Ōtuataua Stonefields on the Manukau Harbour, near Auckland’s international airport.

The protest was applauded rather than condemned. His coach accepted it, in contrast to the way that similar sporting protests have been treated recently in the United States.

Led by young and media-savvy women under the banner SOUL (Save our Unique Landscape), Ihumātao has attracted wide public support. It has created a coalition of Māori and heritage activists seeking to preserve one of the last largely unchanged landscapes that records the very earliest human occupation of New Zealand.

So far, Prime Minister Jacinda Ardern has declined calls to visit the site. Her caution is well founded, because the conflict has the potential to undermine the long-term settlement of historical grievances.

From protest to treaty settlements

Ihumātau brings together those demanding greater recognition of the site’s sad history. The people from this land were invaded, their homes looted and destroyed and some of their lands confiscated in the 1860s, on a pretext of rebellion. They suffered indignity upon indignity as the pressure of an urbanising Auckland increased.

The events at Ihumātao are reviving forms of protest common in the 1970s, including highly contentious, but ultimately successful occupations of nearby Bastion Point and the Raglan Golf Course. Now, these protests are greatly enhanced by new media.

This demonstration of the power of direct action stands in contrast to the slow investigations of the Waitangi Tribunal and the settlements under the Treaty of Waitangi that have followed.

In capturing the imaginations of younger generations, like Perenara, unborn when the Waitangi Tribunal began hearing its historical claims, Ihumātao has the potential to destabilise the investigation and settlement of historical grievances. It could also challenge the painfully constructed post-settlement organisations which represent iwi (Māori tribes) with both central and local government. 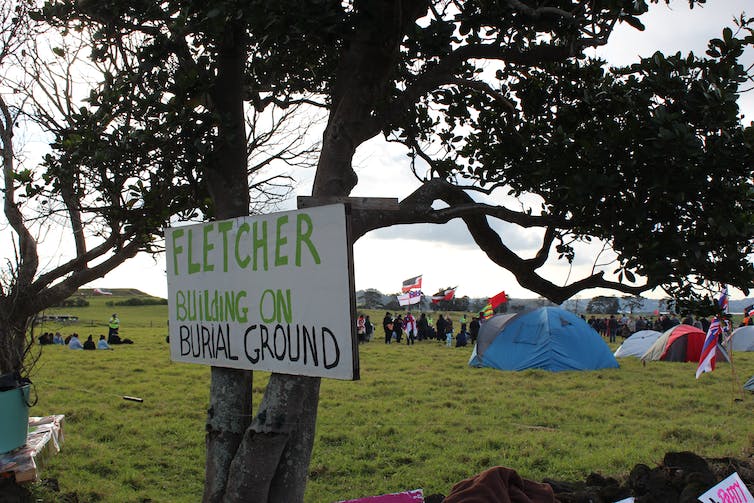 The main aim of the land occupation at Ihumātao is to stop a housing development. Alika Wells/Wikimedia, CC BY-SA

Treaty settlements acknowledge historical claims and the payment of some compensation has enhanced iwi commercial and cultural development throughout the country, including for Waikato Tainui. But for iwi of the Manukau, it has done little to resolve their long-held grievances.

The Waitangi Tribunal came to Makaurau marae (meeting place) at Ihumātao in 1984, eight years before Perenara was born. At the time, it had no jurisdiction to look at claims prior to 1975, when the tribunal had been established. But in its investigation of what happened to Ihumātao, and those neighbouring Māori communities, it could not avoid the sorry history of warfare, confiscation and the desecration of sacred sites, while focusing on the increasing impact of pollution and development on the iwi’s land and marine resources.

The investigation of the Manukau claims provided one of the most persuasive arguments that the tribunal’s powers needed to be expanded back to 1840, the year the Treaty of Waitangi was signed, to include a review of New Zealand’s entire history of colonisation. But 35 years later, the Ihumātua claims remain unsettled and the tribunal has never returned.

In 1995, the Tainui Raupatu settlement began an era of treaty settlements. The settlement provided financial redress for confiscation claims, including those of South Auckland iwi. It also aimed to be full and final, to prevent Māori from raising these issues again in seeking further redress.

In return, treaty settlements provided for the establishment of new Māori authorities. These would represent claimants in the future, and would form the basis for a new relationship with the Crown, beginning what the Crown has claimed would be genuine treaty-based partnerships.

While many of the iwi of South Auckland were and remain strongly associated with Waikato Tainui and the Kīngitanga, the Māori King movement, they have also been negotiating subsequent settlements. Some, like Te Kawerau ā Maki and Ngāti Tamaoho, have been completed, but others, including Te Akitai Waiohua, are still somewhere in the queue. 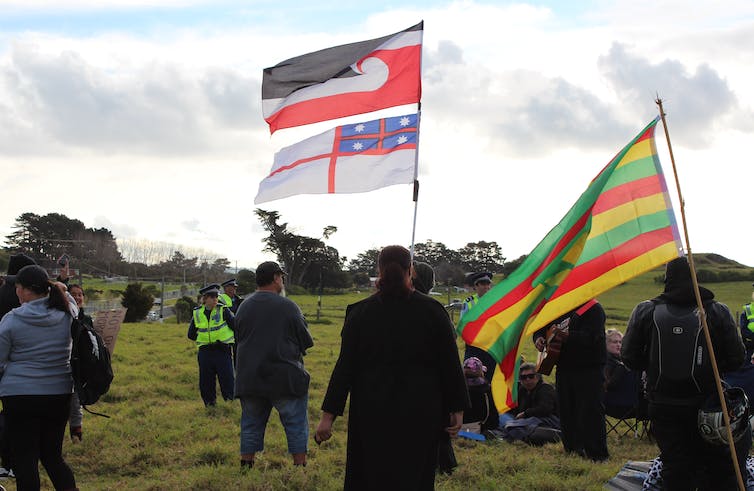 The whole settlement process relies on a policy established in the early 1990s, when Perenara was but a toddler. The policy is locked into the assumptions about Māori and the Crown and the role of the state that dominated the period of state restructuring from 1984 to 1993.

The government established a cap of NZ$1 billion for all treaty settlements. Each iwi negotiates a package of financial and cultural redress, but the financial redress is driven by a set of relativities established at the time. This determined that Tainui as a whole got NZ$170 million for raupatu (confiscation) claims and Te Akitai Waiohua Agreement in Principle entitles them to NZ$9 million for the settlement of their remaining claims, including Ihumātao.

Treaty settlements today rest on once highly unpopular policies, determined by largely forgotten politicians a generation ago. Innovations such as recognising the legal personality of Te Urewera and the Whanganui River have been welcomed by many Māori. However, there is also disquiet over the impact of treaty settlements on iwi.

Read more: Three rivers are now legally people – but that's just the start of looking after them

The Ihumātao protest began in 2016, but only gained momentum in the popular imagination after all legal remedies were exhausted and the police were called in. If a new generation, long separate from those who led the claims in the 1980s, choose direct action and successfully bring the Crown to the negotiating table, then the message is clear. Protest works because patiently sitting in line does not. 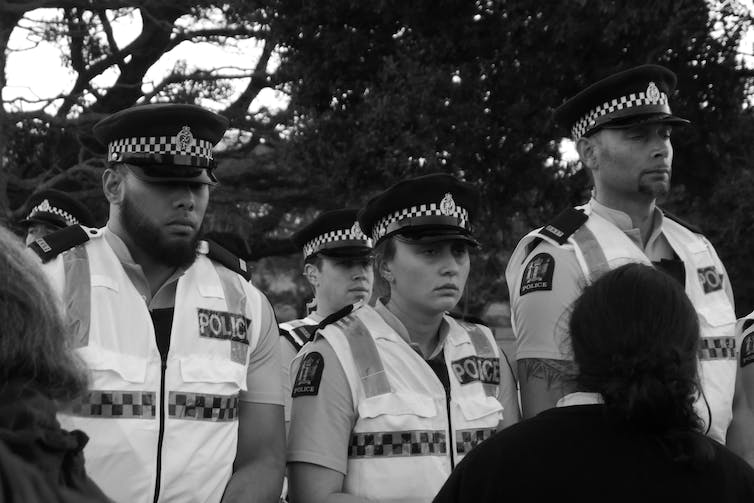 Awareness of the land occupation increased after police were brought in. Wikimedia, CC BY-SA

It is possible that this whole protest can be separated from historic treaty claims, without reopening existing settlements or upsetting relativities between settlements. SOUL are very careful to limit the protest to the stonefields and to halting a housing development.

Extracting Ihumātao from broader grievances would still be difficult, as the Waitangi Tribunal found in 1984. If the protest can be contained as limited to preserving historic landscapes for future generations, Māori and non-Māori, an agreement could be reached that remains technically outside of Treaty of Waitangi claims and settlements.

To use Crown money to purchase private land, to resolve a treaty grievance, would have flow-on effects throughout the country. One solution already suggested, for the Crown to provide Tainui Waikato the funding to purchase the land in the name of King Tuheitia, would provide an effective solution, outside of the treaty settlement process and through a recognised iwi entity.

Challenging times for Māori and Crown

It is not just the Crown who needs to tread carefully. If the Crown was to negotiate with SOUL, come to a settlement which involved public expenditure to purchase land from its current owners, Fletcher Building, then it would give legitimacy to any Māori group attempting to undermine and reverse the decisions of Crown recognised tribal authorities.

Even in negotiating with SOUL, the Crown would be seen as ignoring an agreement between Fletcher Building and one of its Crown recognised treaty settlement entities, the Te Kawerau ā Maki Trust, even though Te Kawerau ā Maki’s relationship with Ihimatāo is more recent and personal than based on customary interests.

All of this is occurring at a time when Crown/Māori relationships appear to be in crisis. Major questions are being asked about the ministry for children Oranga Tamariki, the justice system’s treatment of Māori prisoners, Māori mental health and the treatment of Māori children in care in the past.

In all of this, leading Māori authorities created out of treaty settlements have the capacity to provide kaupapa Māori (by Māori for Māori) services in the interests of hapū (sub-tribes) and whānau (family). There is a significant risk that if government is not seen to be acting responsibly and quickly, not only to resolve Ihumātoa but also these broader issues of disadvantage, the structures created by treaty settlements could be under threat.

However much treaty settlements can pretend to be full and final, to put history behind us, this objective has been a notable failure almost everywhere in this country’s past. New generations demand their own way of confronting and reimagining the past and in negotiating in the present. They will not be bound by those before them.