Federation Square in Melbourne has been listed on the Victorian state heritage register just 17 years after its completion. The push for heritage status was provoked by the now-abandoned Apple store proposal for the city centre site. Heritage considerations will now guide this important public space, widely known as Fed Square, as it evolves now and over future generations.

The Victorian National Trust nominated the square to the Victorian Heritage Register in July 2018. This followed the Victorian government’s pre-Christmas announcement of previously secretive plans for the Apple store. The nomination led to interim heritage protections for Fed Square and Apple abandoned its proposal in April 2019. 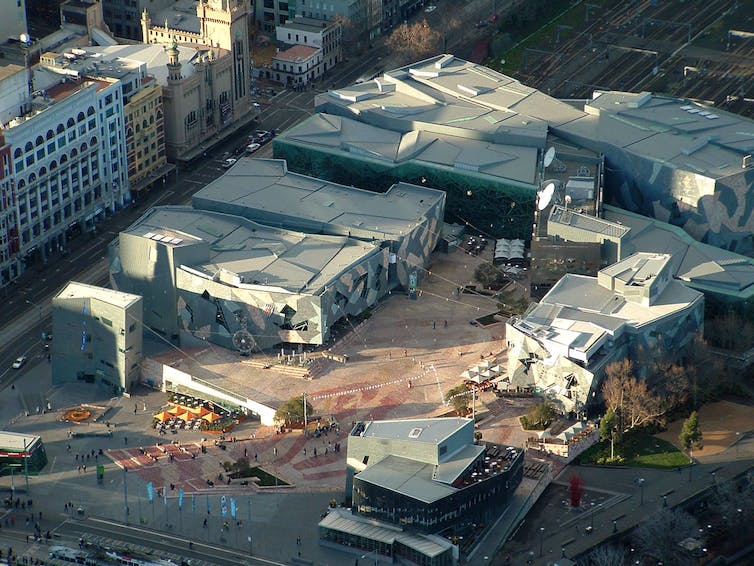 Now heritage-listed, Fed Square as seen from above in August 2007. AussieNickuss/Wikipedia

Places and objects listed on the Victorian Heritage Register have legal protections. Fed Square joins around 2,500 other items, ranging from landscapes and gardens to buildings, memorials and artefacts.

To make a major change to a listed place, its owner and custodian must apply to Heritage Victoria for a permit.

Heritage Victoria will consider the cultural heritage impacts of any suggested changes. A public statement of significance will guide its decision-making. As long as Fed Square’s heritage significance is, on balance, retained, then the proposal can proceed.

Heritage Victoria has already considered changes to the square. While it had interim protections, works for the Melbourne Metro Tunnel and the Australian Centre for the Moving Image (ACMI) redevelopment were allowed.

After all, Fed Square is located above the historical Princes Bridge Station and a metro station enhances both the square and Melbourne. Similarly, ACMI must be kept up-to-date as a forward-looking, technology-orientated cultural institution.

Australia has comprehensive heritage systems. That’s why it has taken over 18 months to reach the point of listing Fed Square.

The National Trust’s original nomination was extensive. It had input from National Trust expert committees and external groups, including the Royal Historical Society of Victoria, Melbourne Heritage Action and the Our City, Our Square campaign.

Heritage Victoria then conducted its own assessment of Fed Square before recommending that the independent Heritage Council list this place.

The Heritage Council held a public consultation. A record 754 submissions were received. Only three were against listing. A one-week hearing presided over by three council members followed in April 2019.

The Heritage Council then deliberated for four months. On August 26 2019 it made its final determination: to list Fed Square.

Read more: Heritage value is in the eye of the beholder: why Fed Square deserves protection

Among supporters of the heritage listing, there were disagreements about which criteria applied.

There are eight state heritage criteria, of which three were found not to apply. Fed Square was not deemed to be an uncommon or instructive aspect of Victoria’s cultural history. Nor was it said to be specifically important for its design connection to LAB Architecture Studio. 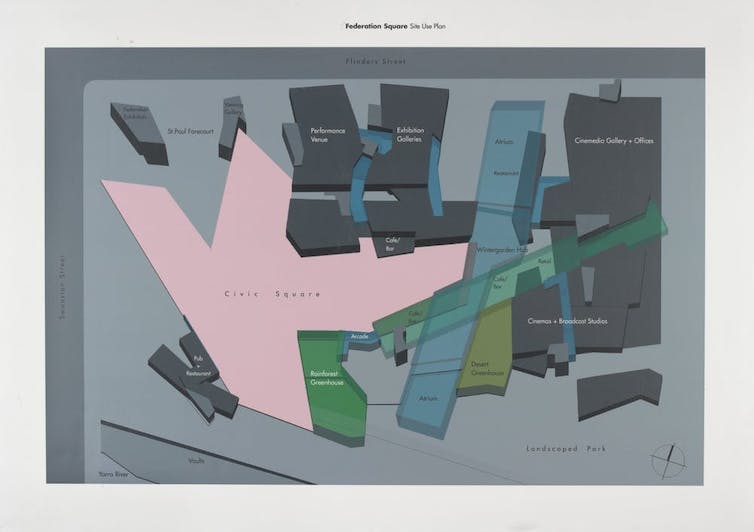 That Fed Square is only 17 years old – relatively young for a heritage listing – was factored into the determination. A principle exists that, ordinarily, a generation should have passed before considering a listing.

This principle is, however, a flexible one. Other places listed soon after completion in Melbourne include the National Gallery of Victoria, Victorian Arts Centre and Shell House (1 Spring Street).

Although recognising that caution was necessary when listing youthful places, the Heritage Council sided with the Royal Historical Society, which wrote that Fed Square has within a generation become an “integral and essential part of the fabric of Melbourne life”.

Read more: How the internet is reshaping World Heritage and our experience of it

Whether Fed Square should be listed as a public space was particularly contentious. Many Melburnians might well think it’s primarily important as a public gathering place, but that view does not automatically lead to heritage protections.

Fed Square management sought to quash the idea that it was a public square. The argument was two-fold: the square is not really a public space because cultural exchange and commercial tenants are also central to this place; and public squares should not be heritage listed at all. Both of these arguments were rejected.

The Heritage Council found Fed Square is a pre-eminent public space. Perhaps the cinemas and galleries and even the cafes and restaurants enhance it. Establishing an important precedent, Fed Square was specifically identified as a “notable example” of a public square for its size, civic prominence and cultural activities.

As visitors enter Fed Square by walking up the steps from the Yarra River or Flinders Street Station, in front of the digital screen, the civic square itself – intact, legible and enclosed – has been explicitly protected. 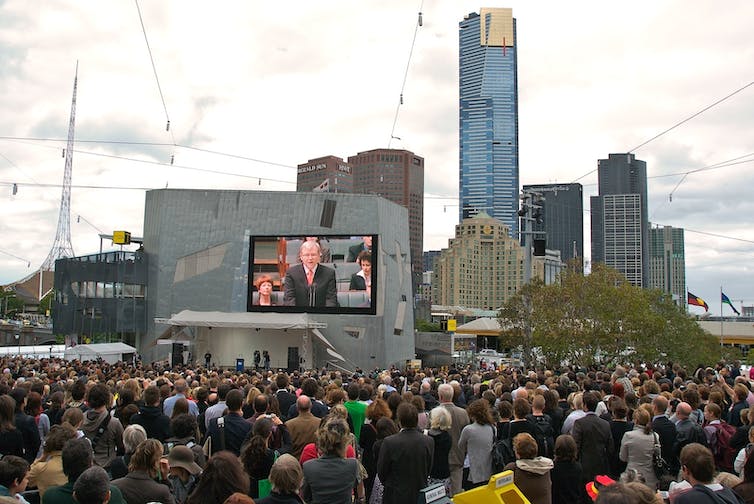 Over the last two decades, Fed Square has become the civic heart of Melbourne. It was only a question of time before it would be recognised as a listed heritage place.

The misconceived Apple store simply created a sense of urgency. The Apple proposal was based on the incongruous idea that Fed Square should be a commercial hub, a notion that must be dismissed in favour of community, civic and cultural objectives for this place.

At the moment, the custodians of Fed Square – its management and the Victorian government – have a once-in-a-generation opportunity to shape the next stage of this place.

A conservation management plan will be prepared based on the heritage listing. Heritage thinking should also inform the current Fed Square review. You can have your say on Victoria Engage until the end of September.

The heritage system has worked at Fed Square by recognising the breadth of associations between people and this place. As the square continues to evolve, its role as Melbourne’s foremost public space will hopefully be assured.