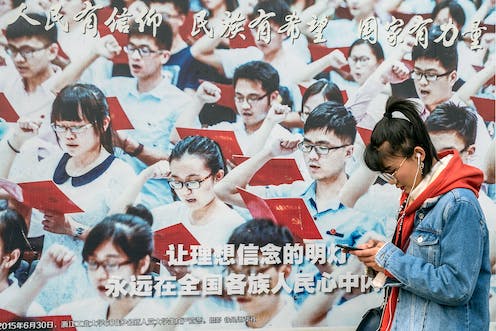 Earlier this year, a new app was launched in China to put the patriotism of Chinese citizens to the test.

Named “Study Xi to Strengthen the Nation”, the app quizzes users on all things related to President Xi Jinping – his policies, activities, achievements, theories and thoughts. Users can earn points and win prizes for correct answers and compete with colleagues and friends to see who knows the most about China’s leader.

The app is the latest example of a rethink by the Communist Party when it comes to its propaganda efforts and how best to justify the legitimacy of its one-party rule, extol the virtues of the party, and promote patriotism to an audience of young, tech-savvy Chinese.

For those institutions responsible for the production of effective propaganda, this is a real challenge. After all, propaganda in the 21st century has to go beyond forcing people to sit in study sessions on Friday afternoons, read the People’s Daily newspaper, or watch China Central Television (CCTV) in group meetings.

Thanks to a number of developments, the old propaganda messages of previous generations can easily be repackaged for millennials. Like the rest of the world, Chinese millennials are keen adopters of the latest mobile technologies and suffer from short attention spans. They are also just as enthusiastic as their Western counterparts about posting jokes, music videos and short, sharp, attention-grabbing memes on social media.

The Chinese government, meanwhile, is putting more of an emphasis on humanising its approach to leadership. Politicians are keen to be seen as relatable rather than authoritative figures.

So, to get its messaging across in a new way, party propaganda has morphed from dry sermons to what I like to call indoctritainment. And these campaigns are often high-end productions.

Increasingly, ideological messages are more effective if they are delivered using a platform that’s already been trialled and proven in marketing. In 2016, for instance, CCTV launched a promotion of the Communist Party in the form of a public awareness advertisement to mark the 95th anniversary of the founding of the party.

The one-minute video, titled “I am a Chinese Communist Party member,” features heartwarming vignettes of individuals from different walks of life – teacher, cleaner, surgeon, policeman, local public servant, fisherman – who are all good Samaritans doing their bit to help others.

The message is clear: the party is being re-branded as an organisation made up of unsung heroes. As the voice-over explains:

I am the first one to arrive, I am the last one to leave, I’m the one who thinks of myself the least, and cares about others the most … I am the Chinese Communist Party, and I am always there with you.

Another video promoting the Chinese military, “I am a Chinese soldier”, demonstrates the point. Even without the English subtitles, it’s not hard to see what the producers were going for: a patriotic Hollywood movie or romantic tear-jerker.

Another tactic is the use of popular culture as a way of conveying sometimes dense or dull Chinese government policies, especially if the intended audience is global.

Channelling David Bowie, Monty Python and the psychedelia of the 1960s, the three-minute video was produced by a digital media production team operating under the auspices of the government’s main propaganda offices in Beijing.

Two years earlier, the same studio also produced the widely circulated five-minute video clip, “How leaders are made”. Xi Jinping appears in the clip as a cartoon character, as do US President Barack Obama and British Prime Minister David Cameron.

Light-hearted, zany, and (again) featuring American English, the video informs viewers that Xi has worked long and hard to move up China’s political ladder. The implication is that Xi’s power is just as legitimate as that of his Western counterparts.

Within a short period after its release, the video had been viewed more than a million times on Youku, China’s version of YouTube.

Propaganda by way of screen bullets

Increasingly, the Communist Party’s propaganda material goes viral only after it appears on popular video-sharing websites with “bullet screens”. This is an interactive feature that enables viewers to “shoot” text comments across the screen as the video is being streamed. It’s very popular with younger audiences.

One of China’s biggest bullet screen platforms is Bilibili, often referred to as “the B site”.

The site used to be occasionally shut down for streaming what the government considers “morally unsound” material.

To stay on the party’s good side, Bilibili now plays host to a wide suite of propaganda produced by CCTV or the Chinese Department of Propaganda. In 2015, the Communist Youth League of China also began to hold regular courses on the site aimed at promoting patriotism among young people.

But how effective is it?

Just how successful these strategies have been is still not entirely clear. While the “Xi Jinping thought” app has captured the imagination of many outside China, party members who have been encouraged - in some cases requested - to download the app seem less than enthusiastic.

And some of these new propaganda efforts have backfired and attracted cynical responses online, even ridicule.

But judging by the many comments viewers have left on the B site, it seems fair to conclude that some of the tactics have had the intended effect of endearing the party and its leaders to the young and impressionable.

This is a reminder of how naïve it is to assume that technologies are inherently democratising, and that digital disruption is likely to spell the end of communism in China. Such assumptions still permeate most Western media stories about the Communist Party’s new propaganda strategies, but this is clearly not the case.

As the party’s propaganda strategies become more nuanced and sophisticated, so should our frameworks for understanding them.