Some people don’t like sharing their food – we all have a friend who gets cranky when you steal a chip from their plate. For wild animals, this makes sense, because any food shared is energy lost that could otherwise have been used to pursue more food.

So it was a big surprise to discover wild leopard seals feeding alongside one another while eating king penguins at South Georgia, a remote island in the southern Atlantic Ocean. On top of this, they may have even been cooperating with each other to eat these enormous seabirds. 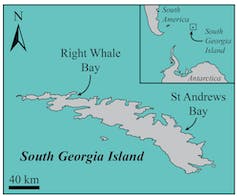 Location of the study. James Robbins

We report this fascinating observation in a new study published today in the journal Polar Biology.

Can’t we just all get along?

Leopard seals have a ferocious reputation as one of the top predators in the Antarctic ecosystem. They are infamously the “principal enemy of the penguin”, as immortalised in the film Happy Feet.

Read more: When mammals took to water they needed a few tricks to eat their underwater prey

But when they eat penguins, leopard seals are normally highly territorial, scaring off rivals by lunging at them with a fearsome set of teeth. Animal-mounted cameras have even revealed that leopard seals ambush each other to steal captured prey.

But that’s not what was seen when the film crew working on the Netflix documentary series Our Planet visited South Georgia. Instead, they were astonished to find wild leopard seals floating alongside one another dining together on a king penguin carcass, taking it in turns to tear off pieces of food.

Too costly to fight

Given how aggressive leopard seals normally are around food, why were these seals behaving so out of character?

Consider this: if you were at an all-you-can-eat buffet and a stranger sat at your table and began eating your food, would you chase them away or let them share with you, knowing you could easily get more afterwards?

When food is very abundant, it may well be cheaper to share than to fight. Penguin colonies offer a near-constant supply of potential prey, attracting scores of predators. In this case, up to 36 leopard seals were seen near the colony at the same time.

So if a seal paused feeding to scare or fight off a rival, there is a good chance a third seal would sneak in and steal the food. In this situation it makes more sense to focus on eating as much as possible, as fast as possible – tolerating some food theft if necessary so as to avoid wasting energy on fighting that would risk losing the prey altogether.

The seals didn’t get along perfectly all the time. We saw some aggression, but perhaps this is to be expected if they are just tolerating each other out of necessity.

Even in our observations, the seals didn’t always get along – note the prey item floating in the water where it could easily be stolen by a third seal. Dion Poncet

Another explanation for these unexpected observations is that leopard seals might be cooperating to make it easier to consume such large prey.

Unlike northern seals, leopard seals don’t have clawed paws to help them hold prey. Instead, they have paddle-like flippers with tiny claws, forcing them to vigorously thrash the prey from side to side in their teeth to tear it into pieces small enough to swallow. This energy-intensive eating style is even harder when the prey is large – like adult king penguins. 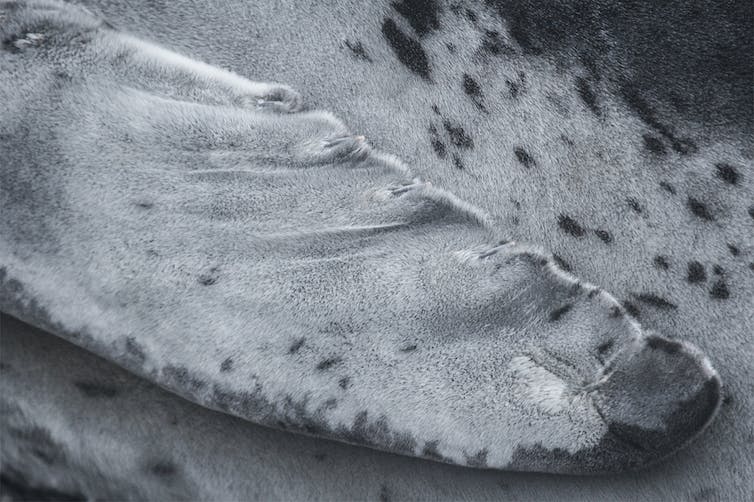 Unlike northern seals, leopard seals have a paddle-like flipper that lacks the large claws needed to hold and tear food. James Robbins 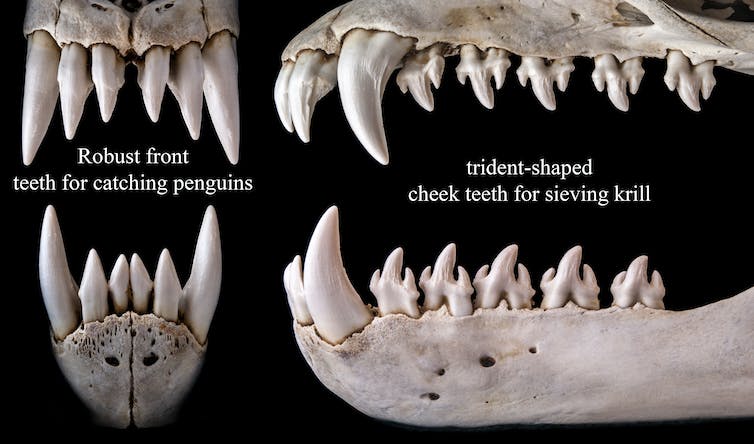 Tools of the trade: Leopard seals use their strong front teeth to kill penguins, while the trident-shaped cheek teeth act as a sieve for trapping tiny krill. David Hocking

Alternatively, if two animals hold the prey between them, one can act as an anchor while the other tears off a chunk of meat. This saves a lot of energy that would otherwise be wasted shaking the prey around. 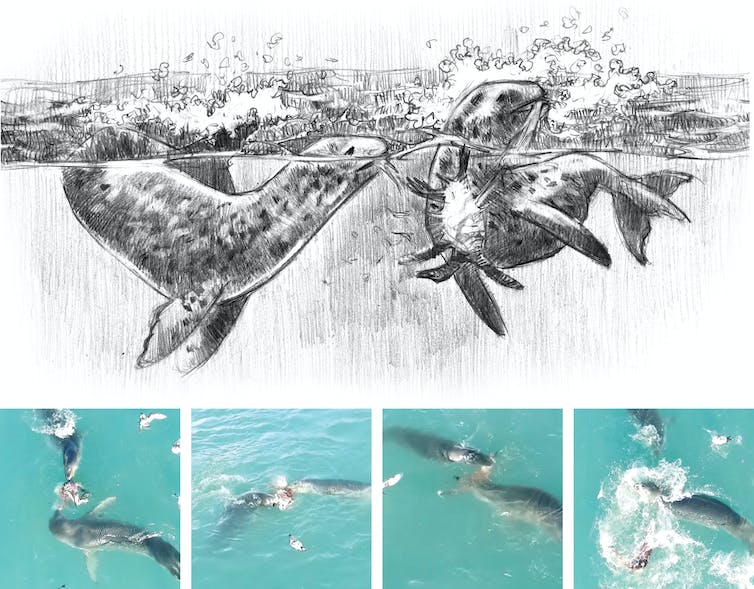 This type of cooperative food processing is actually quite common among aquatic top predators, such as killer whales and crocodiles, that can’t easily hold onto food.

The unusual case of the sharing seal

This last possibility made us rethink the interpretation of a famous encounter between a wild leopard seal and National Geographic photographer Paul Nicklen. On entering the water, Nicklen was repeatedly approached by a seal that appeared to be trying to feed him a penguin in an act of unexpected altruism. But perhaps this was not a free gift, but an offer to cooperate.

Read more: The birdlife of South Georgia is handed another chance

The latest discovery is a great example of how new technology can help researchers make close-hand observations of wild animals. By using a camera drone, the film-makers could fly above the animals without disturbing them, allowing them to observe behaviours that have so far gone unnoticed.

The remoteness of Antarctic ecosystems can make it hard to connect with the wildlife there, but these advances in technology are helping to provide new windows into this icy world.