Teenagers who play organised sport only get seven minutes more physical activity per day, on average, than teenagers who don’t play any sport.

Our research, published in the Journal of Science and Medicine in Sport, found organised sport contributes to just 4% of teenagers’ daily physical activity levels.

There are several possible explanations for this. Teenagers typically get most of their physical activity during school hours and unstructured leisure time rather than organised sport.

Studies show teenagers spend between one-third and one-half of time at sport practice getting activity at an intensity that’s beneficial for their health. Teenagers may also be getting to and from sport practice and games in a car.

And those who don’t play sport may be spending this time doing other physical activities.

This isn’t to say sport isn’t important, but there are different ways to be active. Teenagers might walk or cycle to and from school, walk between classes at school, participate in physical education, shoot hoops at the local park with friends, help with chores around the house and also play sport.

What did we study?

We recruited 358 teenagers (146 boys, 212 girls) from 18 Victorian secondary schools for the study. We asked them to report the number of sports teams and physical activity classes they took part in outside school hours, as well as the type of sport they played and the number of times they played each week.

We also recorded participants’ daily physical activity by asking them to wear an accelerometer (a device recording their movements) for eight days.

Participants (with a mean age of 15.3) spent a mean of 27 minutes per day doing moderate to vigorous physical activity.

Half reported playing at least one sport. Those who played sport did so an average of 3.4 times per week. They got seven more minutes per day of activity than the participants who did no sport. 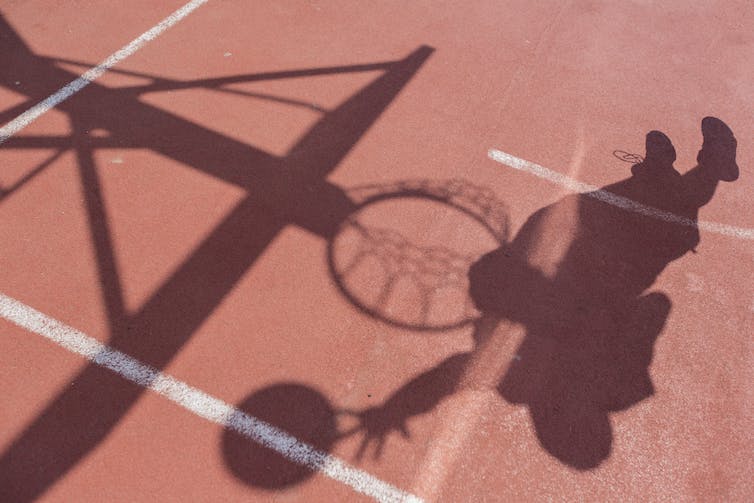 There are many ways to be physically active. from shutterstock.com

Participants got an extra five minutes of physical activity per day, on average, for each additional sport. Field hockey and gymnastics contributed most to activity levels.

This doesn’t mean playing sport isn’t important. Sport offers a range of social and mental health benefits for teenagers. But our study shows it’s not the best way to meet physical activity guidelines or to lose weight. Previous studies also show the link between playing sport and weight loss is quite weak.

Why does this matter?

But only 6% of 15-to-17-year-olds meet these guidelines. Latest figures show one in four Australian children and teenagers (aged 2-17) are overweight or obese.

The federal government has spent hundreds of millions of dollars on school and community sport over the last decade or more. The Sporting Schools program, for instance, provides children with access to over 30 national sporting organisations that deliver sport sessions (sometimes along with equipment) during school term.

Sports programs may fail to reach teenagers who are least active. Teenagers who play organised sports tend to come from higher socioeconomic areas. Government-funded sports programs also often run at weekends and after school, but physical activity should be accumulated throughout the day every day.

The government is now starting to target more than organised sport to get young people moving. In spite of its title, the Sport 2030 – National Sports Plan’s top-line goal is to “build a more active Australia”.

This is the first time Australia has had a national sport or physical activity policy. The next steps are to develop a national action plan or evidence-based framework. And there are several templates that could be followed.

For instance, the Heart Foundation’s Blueprint for an Active Australia contains 13 action areas, 12 of which target-specific settings and population groups such as workplaces, health care, children and adolescents, sport and active recreation.

Action area 13 recommends research and program evaluation to ensure meaningful progress is being made towards increases in overall physical activity across the population.

Plans like these recognise the need for relevant agencies and government areas to work together. Sport and recreation needs to work with education and schools, the health sector, urban planning, transport, justice, disability organisations, Aboriginal and Torres Strait Islander people, parent groups and private industry to support young people to get moving.

Our research findings support the notion that focusing solely on a single strategy or sector is not enough to address current levels of inactivity among Australian youth. A teenager would need to be playing sport daily and performing at the elite level for it to be the main contributor to them meeting guidelines.