Papua New Guinea Prime Minister James Marape is visiting Australia this week, his first overseas trip since he was elevated to that office in June this year. And it’s the first time Scott Morrison has hosted an international leader in Australia since he was re-elected as prime minister in May.

This week’s visit has been positioned as the first of what will be an annual meeting between the leaders. It indicates a stepped up relationship, one that adds to Morrison’s growing focus on building personal relationships throughout the region: in Vanuatu, Fiji and Solomon Islands.

Read more: Yes, Morrison 'showed up' in the Pacific, but what did he actually achieve?

There are many things the two leaders have to discuss, from a naval base development to asylum seekers on Manus Island. But on arrival, Marape was clear that he did not plan to discuss his country’s relationship with China.

Marape restated PNG’s overall position on foreign policy: that of being “friends to all and enemies to none”. But that didn’t prevent the Australian media asking Marape questions about China during a joint press conference on Monday.

One journalist asked if Marape was concerned about potential governance problems associated with increased Chinese investment in his country. His response could not have been more straightforward:

Many in the Australian media and policy community would like to know much more about the relationship between PNG and China, as they wonder how it will affect Australia’s influence with their nearest neighbour.

As we have seen elsewhere in the region, the relationship between PNG and China has become more developed in recent years.

Under the previous PNG prime minister, Peter O'Neill, PNG became the second Pacific Islands nation to sign on to the Belt and Road Initiative in June 2018.

O'Neill participated in the Belt and Road Initiate Forum earlier this year, and indicated that he foresaw PNG becoming even more involved in projects for the global infrastructure and trade strategy.

O'Neill resigned in May, and it’s yet to be seen whether Marape will participate in projects for Belt and Road Initiative.

Read more: Crisis? What crisis? A new prime minister in PNG might not signal meaningful change for its citizens

In any case, one thing Marape has made very clear during this visit to Australia is that he’s looking for opportunities to diversify the PNG economy beyond the resources sector. He is particularly focused on growing the agricultural sector, which will require additional investment in infrastructure to supply domestic and export markets adequately.

It’s not always easy to determine the extent of Chinese aid, investment and loans to countries like PNG. But Sarah O'Dowd, an Australian National University researcher, has calculated that at the end of 2018, PNG owed approximate A$588 million in external debt to China. This represented 23.7% of the total external debt.

Australia provides the largest amount of aid and investment into PNG in the world. But the perception in Canberra remains that Australia’s influence in its nearest neighbour is being diluted, and that this needs to be addressed for strategic purposes.

Asylum seekers and a naval base on Manus Island

Given the nature and importance of the relationship between Australia and PNG, it’s not surprising this bilateral meeting has been prioritised ahead of next month’s Pacific Islands Forum meeting in Tuvalu. Their meeting allows for Morrison and Marape spend some time getting to know each other before they meet with a larger group of Pacific leaders. 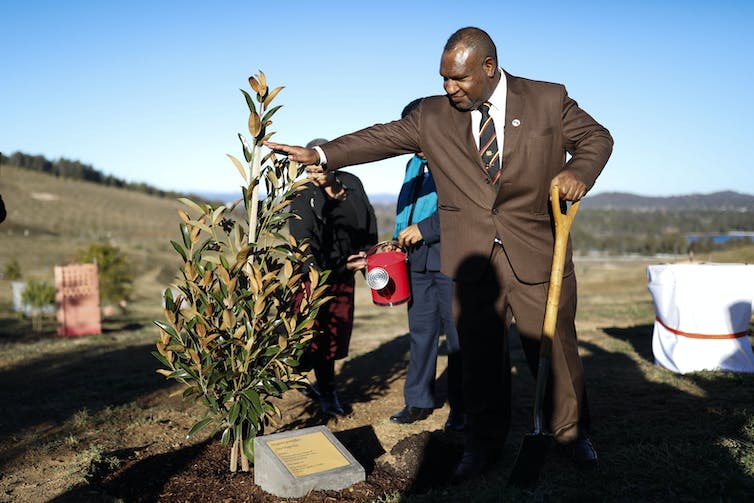 Of the various announcements made on Monday, not much was new. There was a dollar commitment (A$250 million) to last year’s joint announcement by PNG, Australia, New Zealand, the USA and Japan to bring electricity to 70% of Papua New Guinean people by 2030.

There was a passing reference to the joint redevelopment of the Lombrum naval base on Manus island by PNG, Australia and the USA, also announced last year at the APEC meeting held in Port Moresby.

It’s significant that the PNG delegation includes Charlie Benjamin, who is governor of the Manus province. He has already expressed strong reservations about this proposed redevelopment of the naval base. And he is not alone, with other commentators noting that such a development doesn’t necessarily sit well with PNG’s non-aligned status.

The development also provoked criticism from Beijing, which had apparently been seeking an agreement from the PNG government to develop the site.

Benjamin has a powerful voice, and he made good use of it during his own impromptu press conference on Monday.

He used the opportunity to hammer home what has been the biggest thrust of the PNG message to Australia during the visit so far: the ongoing presence of asylum seekers and refugees on Manus and elsewhere in PNG.

Benjamin has made it clear that the time has come for Australia to “step up” and resettle the refugees in his province to another country.

While Marape may feel he has secured some sort of commitment from Morrison to establish a timetable for bringing this bit of the “Pacific Solution” to an end, the lack of detail about what that timetable is may prove a tricky sell back home.