The Victorian government introduced 24-hour public transport on Friday and Saturday nights in Melbourne from January 1 2016. Services mostly run every hour from 1am to 5am on all metropolitan lines with some additional tram and bus services. The initiative, originally labelled “Homesafe”, was proposed as a convenient and safe way to travel in and out of the city throughout the night. But our research shows it did not reduce alcohol-related violence and road accidents.

The budgeted cost of the program is almost A$300 million through to 2020. This includes the cost of protective services officers whose sole role is to patrol train stations and associated areas, ensuring the safety of night-time public transport users.

What did the research show?

Our research evaluated the introduction of 24-hour public transport from two different perspectives. 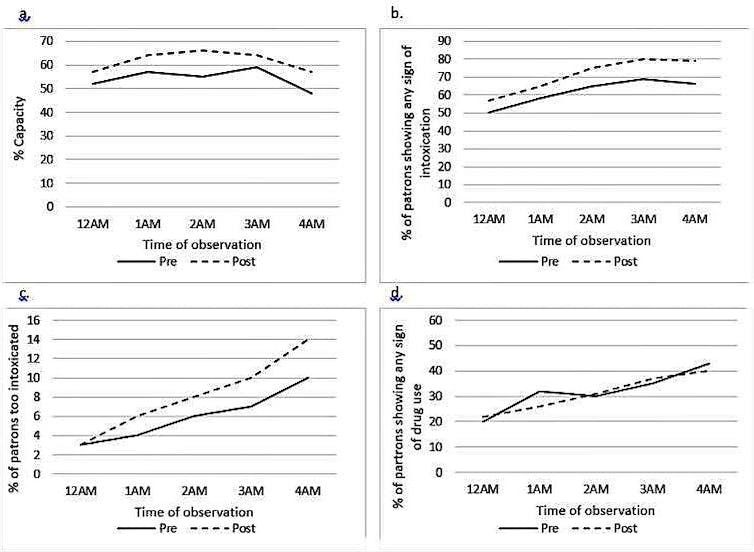 Figure 1. Proportions of patrons: a) in venue by time of observation; b) showing intoxication signs; c) too intoxicated; d) showing signs of drug use. Author provided

Figure 2 shows an immediate increase in police-recorded assaults, until increased police resources were allocated. A temporary reduction followed, although more recent data from the Victorian Crime Statistics Agency (see table 1) show serious assaults have remained stable with a peak in 2018. 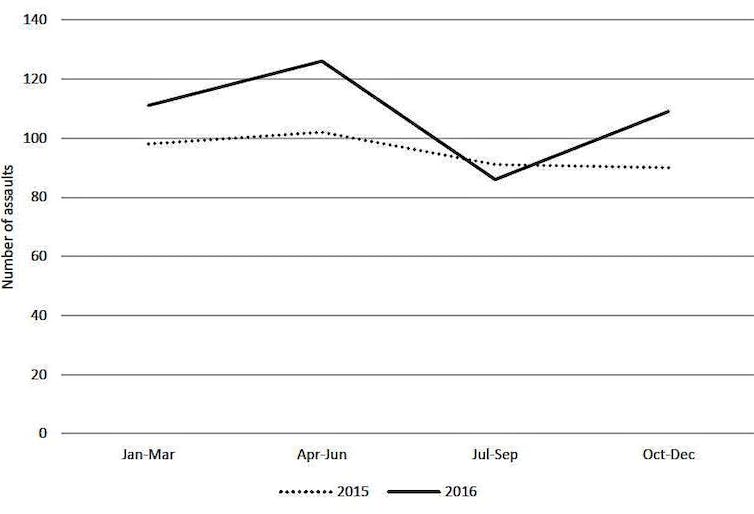 Figure 2. Number of police-recorded assaults resulting in arrest or summons in postcode 3000 during high-alcohol hours, 2015 and 2016. Author provided

Road crashes in the areas serviced by public transport remained relatively stable from 2015 to 2016, as figure 3 shows. 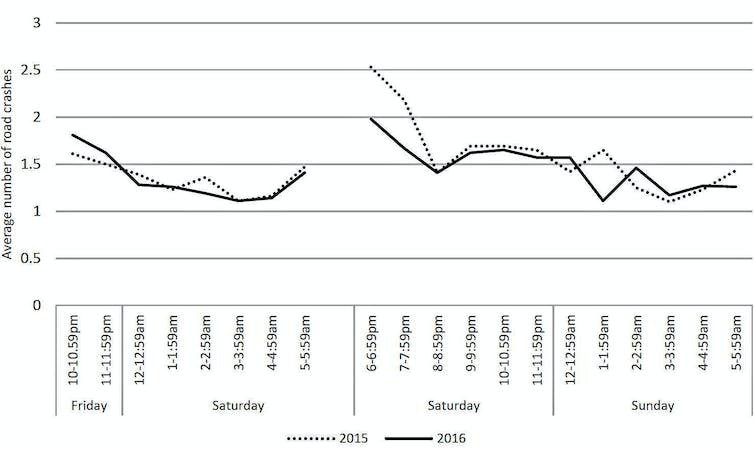 There was little change in the number of people attending the central business district. Figure 4 shows pedestrian counts around Flinders Street Station throughout the night before and after 24-hour services began. 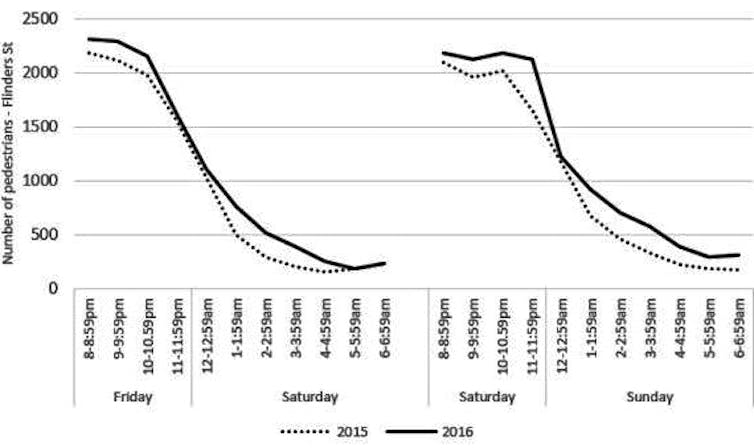 If the aim of the policy was to boost “Melbourne’s 24-hour lifestyle”, then it may be considered successful. More people were in the city later in the evening, using public transport and attending bars and clubs, resulting in higher levels of intoxication in these venues. This is clearly a massive win for the alcohol industry and others that profit from very late-night drinkers on the streets.

Read more: FactCheck: can you change a violent drinking culture by changing how people drink?

These findings, which assess the effects of more than A$300 million in state expenditure, are also important when considering current reviews of liquor laws in Sydney and Queensland, where the alcohol industry and aligned interest groups are proposing 24-hour public transport.

What else could be done?

Other jurisdictions around the world have chosen a range of approaches to reduce alcohol-related harm. By far the most evidence-based policy option is to close venues earlier in the night.

Ending the serving of alcohol at 3am has been the most common variant of this policy in Australia. Australian examples of this approach have been associated with substantial reductions in assaults – 37% in Newcastle and 39% in Sydney’s Kings Cross.

In 2016, Queensland implemented similar restrictions as well as mandatory ID scanning. This means banned patrons are reliably detected before entering venues. Findings from a two-year evaluation are soon to be released.

Read more: Banning orders won't solve alcohol-fuelled violence – but they can be part of the solution

Another possibility is an adaptation of the violent venues scheme in New South Wales, which has seen sustained reductions across the state since 2008.

Our findings suggest the money spent on 24-hour public transport is associated with increases in intoxication and violence.

Another consideration is that reducing taxi queues is no longer the issue it once was. The rise of Uber has provided much more flexibility in nightlife transport.

Governments should trial different policy options to determine what works for their jurisdiction. These trials should be rigorously and independently evaluated. Effective measures can then be identified, unintended consequences addressed and ineffective or overly costly measures replaced. 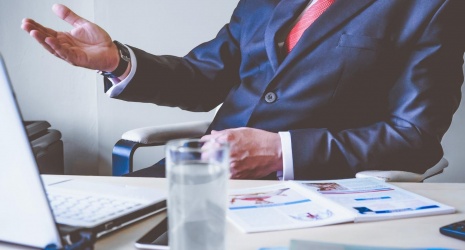 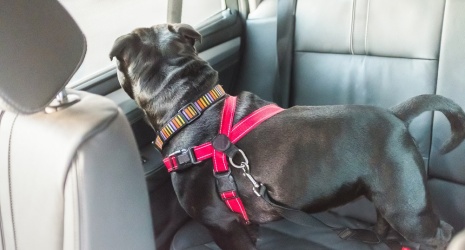