Look up on a clear night and you can see some circular formations on the face of our lunar neighbour. These are impact craters, circular depressions found on planetary surfaces.

About a century ago, they were suspected to exist on Earth but the cosmic origin was often met with suspicion and most geologists believed that craters were of volcanic origin.

Around 1960, the American astrogeologist Gene Shoemaker, one of the founders of planetary science, studied the dynamics of crater formation on Earth and planetary surfaces. He investigated why they – including our Moon – are so cratered.

By 1970, there were more than 50 craters discovered on Earth but that work was still considered controversial, until pictures of the lunar surface brought by the Apollo missions confirmed that impact cratering is a common geological process outside Earth. 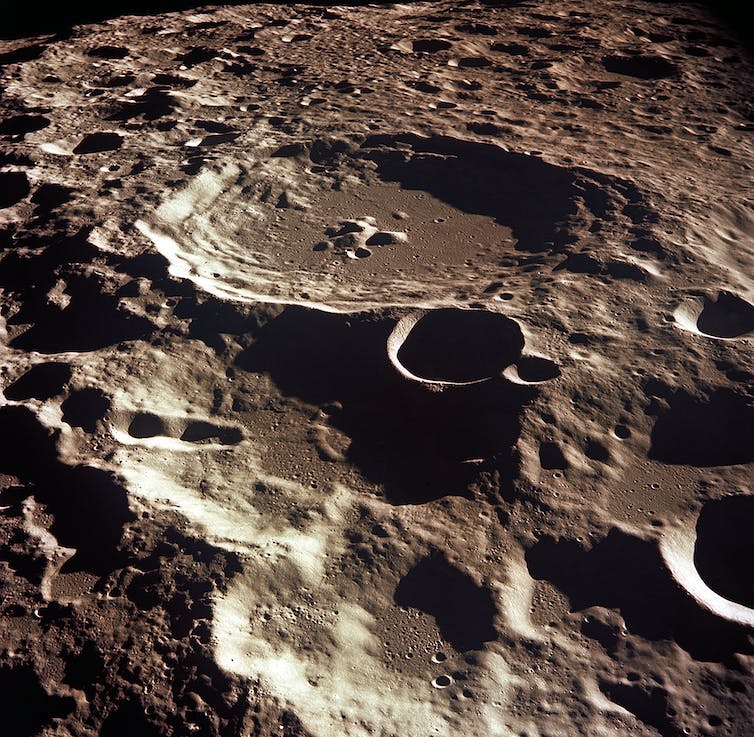 The crater Daedalus on the far side of the Moon as seen from the Apollo 11 spacecraft in lunar orbit. Daedalus has a diameter of about 80km. NASA

Unlike Earth’s surface, the lunar surface is covered with craters. This is because Earth is a dynamic planet, and tectonics, volcanism, seismicity, wind and oceans all play against the preservation of impact craters on Earth.

It does not mean Earth – even Australia – has not been battered. We should have been hit by more rocks from space than the Moon has, simply because our planet is larger.

In contrast to Earth, our Moon has been inactive over long geological timescales and has no atmosphere, which has allowed the persistent impact cratering to remain over eons. The lunar cratering record spans its entire bombardment history - from the Moon’s very origins to today.

The largest and oldest impact crater in the Solar system is believed to be on the Moon, and it is called the South Pole-Aitken basin, but we cannot see it from Earth because it is on the far side of the Moon. The Moon is tidally locked to Earth’s rotation and the same side always faces toward us. 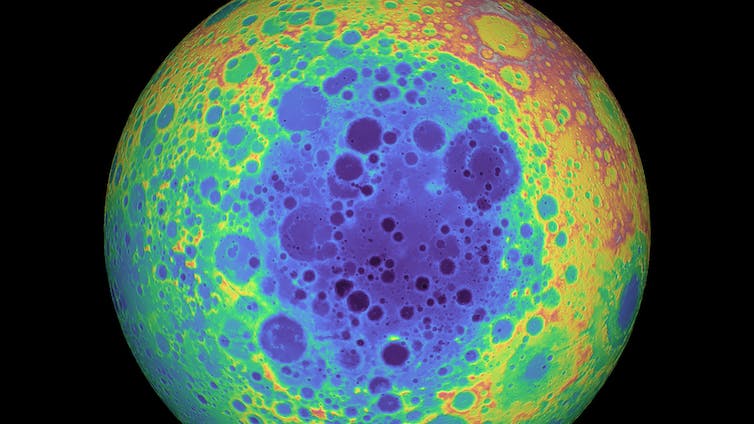 The South Pole-Aitken Basin shown here in the elevation data (not natural colours) with the low center in dark blue and purple and mountains on its edge, remnants of outer rings, in red and yellow. NASA/GSFC/University of Arizona

But this crater, more than 2,000km across, is thought to predate any other large impact bombardment that occurred during lunar evolution. Impact simulations suggested it was formed by a 150-250km asteroid hurtling into the Moon at 15-20km per second!

From Earth, the human eye can observe areas of different shades of grey on the surface of the Moon facing us. The dark areas are called maria, and can be up to more than 1,000km across.

They are volcanic deposits that flooded depressions created by the formation of the large impact basins on the Moon. These volcanic eruptions were active for millions of years after these impacts occurred.

My favourite is the Orientale impact basin, the youngest of the large impact craters on the Moon, but still estimated to have formed “only” about 3.7 billion years ago. 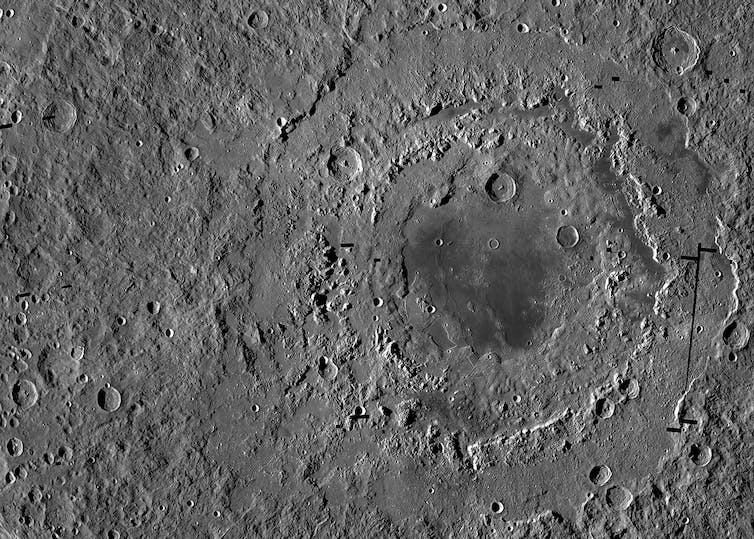 Orientale basin is about 930km wide and has three distinct rings, which form a bullseye-like pattern. This view is a mosaic of images from NASA’s Lunar Reconnaissance Orbiter. NASA/GSFC/Arizona State University

No other large impact event has occurred on the Moon since then. This is a good sign, because it implies there were no very large impacts occurring on Earth either after this time in evolutionary history. (The asteroid that wiped out the dinosaurs on Earth 66 million years ago was only about 10-15km in size and left a crater larger than 150km in size, which was substantial enough to cause a mass extinction.)

As seen from Earth

With a small telescope, or fancy binoculars, you can check out some of the best-preserved complex craters on the Moon, such as the Tycho or Copernicus craters. 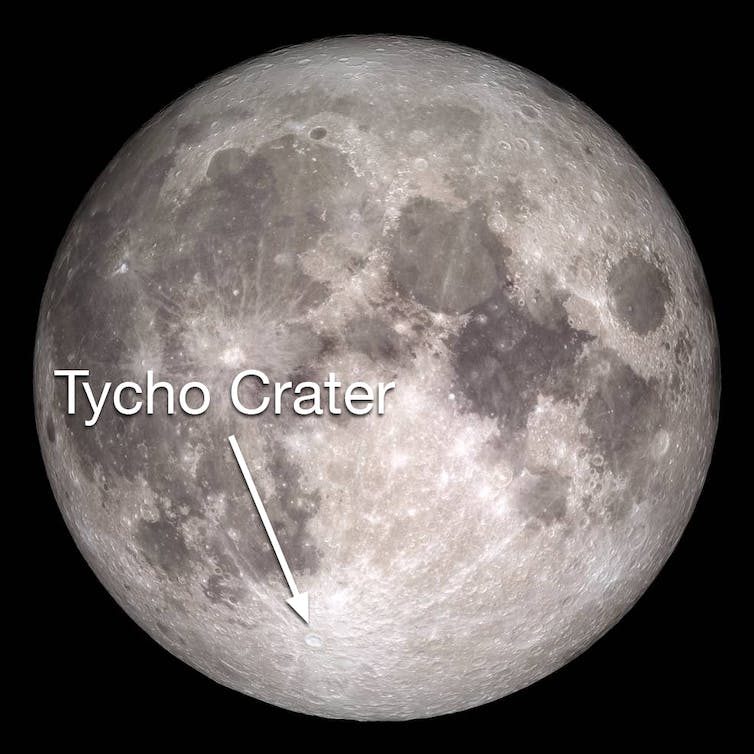 Tycho Crater is one of the most prominent craters on the Moon. NASA/Goddard/Arizona State University

They are called complex craters because they are not entirely bowl-shaped, but are a bit shallower and include a peak in the centre of the crater as a consequence of the material collapsing into the hole made during impact. Tycho and Copernicus are both 80-100km across but have spectacular central peaks and prominent “ejecta rays” – areas where material was ejected across the lunar surface after an impact.

The formation of these craters excavated underlying material that was brighter than the actual surface. This is because lunar surface is subjected to space weathering, which causes surface rocks to darken.

Still a target for impacts

The Apollo 12, 14, 15, and 16 missions placed several seismic stations on the Moon between 1969 and 1972, creating the first extraterrestrial seismic network (ALSEP). During one year of operations, more than 1,000 seismic events were recorded, of which 10% were associated with meteoroids impacts.

So the Moon is still being hit by objects, albeit mostly tiny ones. But as there is no atmosphere on the Moon, there is no gas to help burn up these rocks from space and stop them smashing into the Moon.

The seismic network was functional until it was switched off in 1977, in preparation for new space missions. No one expected that the next fully operational extraterrestrial seismometer would not be placed on a planetary surface (Mars) until 40 years later.

Nowadays, from Earth, using a small telescope (and armed with a little patience), you can see so-called “impact flashes”, which are small meteorite impacts on the lunar surface that is facing us.

You need to be quick to see the flashes – watch for the green boxes.

Thanks to the atmosphere on Earth, similar-sized rocks from space cannot make an impact here because they tend to predominantly burn up, but on the Moon they crash into the soil and release its kinetic energy of the impact via bright thermal emission.