The Lowy Institute has launched a three-year study on gender representation in Australia’s diplomatic, defence and intelligence services, and the findings are critical: gender diversity lags significantly behind Australia’s public service and corporate sector, as well as other countries’ foreign services.

In a field which has long ignored research on gender or feminist approaches to understanding international relations, this report is welcome and sets forth an important research agenda within Australia.

Gender diversity is an important issue for all who value the pursuit of Australia’s national interests overseas. Attracting and retaining the best talent is more important now than ever before.

The economic, political and strategic currents that have carried us for generations are increasingly difficult to navigate.

The report’s most significant findings

The Lowy Institute found that of all the fields in international relations, women are least represented in Australia’s intelligence communities.

As the funding and resources of the intelligence sector continue to grow, this is a serious problem with little transparency. The sector appears to be struggling with a “pipeline” and “ladder” problem: women are both joining at lower rates and progressing at far slower rates than their male counterparts.

Another important finding is that the presence of female trailblazers in these fields, such as foreign ministers Julie Bishop and Marise Payne and Labor’s shadow foreign minister, Penny Wong, may be masking more systemic issues. This may be leading some agencies to becoming complacent, rather than proactive, on gender diversity.

Women’s pathways to leadership continue to be impeded by institutional obstacles, such as unconscious bias and discrimination built into the cultures of these sectors, as well as difficulties in supporting staff on overseas postings. For instance, the report notes that in 2017 the government cut assistance packages for overseas officers, including government childcare subsidies. This has gendered ramifications given that women continue to do the bulk of domestic labour.

As such, the most important and high-prestige international postings are still largely dominated by men. DFAT’s Women in Leadership Strategy has proved successful in meeting initial targets for improving women’s representation, however the industry as a whole has not yet followed suit.

Further, it is not enough to just consider how many women there are, but what roles they occupy, given that women have often been siloed into “soft policy” or corporate areas and out of key operational roles needed for career progression.

The report also draws attention to the marginalisation of women from key policy-shaping activities.

From the study’s research on declared authorship, a woman is yet to be selected to lead on any major foreign policy, defence, intelligence, or trade white paper, inquiry or independent review.

Read more: Women in combat: the battle is over but the war against prejudice grinds on

We would mention a few exceptions of women in other high-profile foreign policy roles – Heather Smith’s stewardship of the G20 during Australia’s presidency and Harinder Sidhu’s leadership in the crucial India High Commission. We would also note the contribution of Jane Duke to the ASEAN Summit in Sydney. 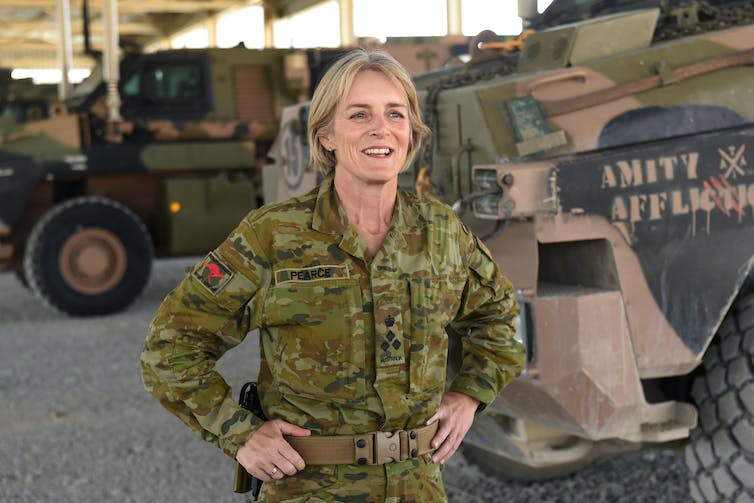 Cheryl Pearce was commander of the Australian joint task force group in Afghanistan before taking up her current role. Paul Miller/AAP

While the under-representation of women in international affairs remains a core concern, we would argue the report could have taken a broader look at gender representation in foreign affairs-focused academic communities, think tanks and publishing industries, as well.

Many of these organisations have similarly woeful records when it comes to gender diversity. For instance, Australian Foreign Affairs magazine has been criticised for the lack of women authors it publishes. We know that it is not for lack of credible voices, but rather seems indicative of a systematic form of marginalisation of women within the wider foreign affairs community.

However, there is some cause for optimism. For instance, our current PhD project is documenting the gender make-up of leaders and internationally deployed representatives in the departments of foreign affairs and trade, defence and home affairs, as well as the Australian Federal Police. As of this January, women represented 39.5% of those in the senior executive service in DFAT, and 41.4% of those employed as heads of Australian embassies and high commissions globally.

Further, we’ve found an increase recently in the number of women who work in diplomatic defence roles. While the Lowy report notes that women held just 11% of international roles in defence in 2016 (it is unclear exactly what international roles they are talking about), we found a slightly higher percentage of women (19%) currently employed in defence attaché roles.

The achievements made in this sphere are not just limited to gender either, with women from culturally and linguistically diverse backgrounds forming an important and growing part of representation.

In fact, a more in-depth analysis of the Lowy report’s data would have produced some very interesting, and more nuanced, findings. For instance, foreign affairs has long been the preserve of men, however it has also been the preserve of certain types of men. Diplomacy remains a bastion of prestige, social class, heteronormativity, and in Australia, Anglo-Saxon privilege. It was only last year, for example, that Australia’s first Indigenous woman, Julie-Ann Guivarra, was appointed ambassador (to Spain).

Overall, as the report outlines, gender equality is not just nice to have, nor is it a marginal issue in foreign policy. Rather, the findings are clear: addressing the continued gender gaps are imperative to Australian foreign policy, national security and stability.

We can, and must, do better. Australian foreign policy needs good ideas, and it needs a lot of them. We cannot assume they will all come from the same place.