Last week I read an article about CRISPR, the latest tool scientists are using to edit DNA. It was a great piece – well researched, beautifully written, factually accurate. It covered some of the amazing projects scientist are working on using CRISPR, like bringing animals back from extinction and curing diseases. It also gave me the heebies, but not for the reason you might expect.

My unease was the echo of a feeling I’d had during the early days of my PhD, when some fellow malaria researchers made a discovery that was reported on the news. I was thrilled for them, but I understood the incremental nature of the work they were doing. I knew that in a real-world, drugs-in-the-clinic sense, we were no closer to a breakthrough than we’d been the day before. I thought the reporters had communicated that clearly. Five minutes later my Dad called to ask if I was out of a job, and what I was going to do now that malaria was cured.

I don’t pretend to understand all the myriad reasons for the gaping chasm between what scientists say and what the public hears. Lately though, I’m starting to think it might have something to do with the metaphors we use, and the way they shape our perception of the complexity involved.

Take CRISPR. It’s most often described as a pair of molecular scissors that can be used to modify DNA, the blueprint for life. And when we read that, I think most of us start imagining something like a child with her Lego bricks strewn in front of her, instruction booklet in one hand, scissors in the other. One set of pictograms, one model; one gene, one disease; one snip, one cure. We’re there in a blink. CRISPR seems like it can work miracles.

Read more: What is CRISPR gene editing, and how does it work?

I want to stress that the molecular scissors metaphor is pretty damn accurate as far as it goes. But in focusing on the relatively simple relationship between CRISPR and DNA, we miss the far more complicated relationship between DNA and the rest of the body. This metaphor ignores an entire ecosystem of moving parts that are crucial for understanding the awe-inspiring, absolutely insane thing scientists are trying to do when they attempt gene editing.

I prefer the metaphor of malware

In my research I use CRISPR from time to time. To design experiments and interpret results effectively, I need a solid way to conceptualise what it can (and can’t) do. I do not think of CRISPR as molecular scissors.

Instead I imagine a city. The greater metropolis represents the body, the suburbs are organs, the buildings are cells, the people are proteins, and the internet is DNA.

In this metaphor CRISPR is malware. More precisely, CRISPR is malware that can search for any chosen 20-character line of code and corrupt it. This is not a perfect metaphor by any stretch, but it gets me closer to understanding than almost anything else. 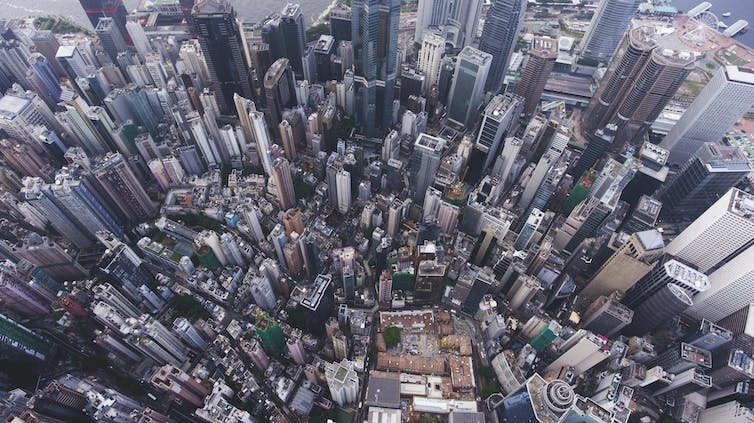 Shutterstock Read more: Editing human embryos with CRISPR is moving ahead – now's the time to work out the ethics Alzheimer’s is like a riot As an example, let’s look at Alzheimer’s, one of the diseases CRISPR is being touted to cure. The headlines are usually some variation of “CRISPR to correct Alzheimer’s gene!”, and the molecular scissors analogy is never far behind. It seems reasonable to me that someone could read those words and assume that chopping away the disease-gene with the DNA-shears should be relatively simple. When the cure doesn’t appear within five years, I can understand why that same person would come to ask me why Big Pharma is holding out (this has happened to me more than once). Now let’s see how it looks using the malware metaphor. The consensus is that Alzheimer’s manifests when a specific protein goes rogue, causing damage to cells and thereby stopping things from working properly inside the brain. It might have a genetic cause, but it’s complicated. In our allegorical city, what would that look like? I think riots would come close. Rampaging humans (proteins) destroying houses and property (cells), thereby seriously derailing the normal functioning of a specific suburb (the brain). And you want to fix that with malware? It’s hard to predict the domino effect Can you imagine for a second trying to stop soccer hooligans smashing things on the streets of Buenos Aires by corrupting roughly three words in the FIFA by-laws with what’s essentially a jazzed-up command-F function? I’m not saying it’s not possible – it absolutely is. But think of all the prior knowledge you need, and all the pieces that have to fall in place for that to work. You’d have to know that the riots are caused by football fans. You’d have to understand which rule was bothering them (heaven help you if it’s more than one), and if that rule causes drama at every game. You’d have to find a 20-character phrase that, when corrupted, would change how the rule was read, rather than just making a trivial typo. You’d have to know that the relevant footballers have access to the updated rule book, and you’d have to know there were no other regulations making your chosen rule redundant. You’d have to know there aren’t any similar 20-character phrases anywhere on the internet that might get corrupted at the same time (like in the rules for presidential succession say, or in the nuclear warhead codes). Even then you’d still be rolling the dice. Even if you stop the riots successfully, which of us really know the long-term consequences of changing the World Game forever? Read more: These CRISPR-modified crops don't count as GMOs Reflecting the right level of complexity At this point, you might say I’m stretching the metaphor a bit far; that this analogy has become a little stuck up its own behind. You’d not be wrong. But by thinking the problem this way, we’ve just given ourselves a pretty decent feel for the complications of polygenic disease, incomplete penetrance, missense/nonsense mutations, epigenetic silencing, genetic compensation, off target and germline effects – all without a single word of science jargon. These are real difficulties scientists are trying to work through to make sure CRISPR is effective and safe. That’s why it takes a long time and costs a lot of money. That’s why most of the promising leads end up going nowhere. Amazingly, astoundingly, sometimes it works.